Prime Minister Narendra Modi-led NDA had a clean sweep in general elections 2019, but the markets ended in a negative territory on Thursday on profit-booking. Although, for the week, the Sensex is up 1,504 points or 4 per cent.

The markets had already factored in all expectations and uncertainties of a stable government in the run up to 17th Lok Sabha elections results. Volatility index India VIX hit a high of 28.6 per cent since September 2015 during elections. The index witnessed its second biggest fall of 29.75 per cent to 19.4 on the verdict day. The last election's result day had registered the steepest drop of 33 per cent. Volatility typically increases ahead of elections only to cool off post elections, putting an end to the political uncertainty. Some more statistics will make you believe our stance: The markets had risen significantly until the election results since the official announcement of the election dates, at least in the past two elections. During this period, the benchmark Nifty 50 jumped around 14 per cent in 2014 and a whopping 62 per cent in 2009. The gains were limited to single-digit growth of 4.4 per cent this time around.

Long story short, markets move on a congregation of factors. In short-term, though the movement is primarily driven by emotions and immediate news flows, in the long-run economic growth, government policies and corporate earnings are what matter. Equities faced a challenging environment in 2018 with Nifty50 sinking around 75 per cent. Foreign portfolio investors (FPIs) sold equities worth Rs 30,000 crore during that period. "Between March 2018 and December 2018, we were experiencing a tracing back of FPI flows to developed markets and safer havens (US, Japan) on the back of dollar strength, shadow of trade war and anticipation of fed tightening. In this context, India along with rest of EMs experienced FPI outflows," highlights Professor Ravi Sundar Muthukrishnan, head - institutional equity research, Elara Capital. The foreign capital is, however, making a comeback with year-to-date inflows of over Rs 63,642 crore. According to Naveen Kulkarni, head of research, Reliance Securities, "FPIs have already invested significant capital before the elections. The market has seen correction because of global challenges and slowdown in consumption growth. However, formation of a stable government will boost the confidence of the investors and the markets are likely to do well in the near-term with election results." 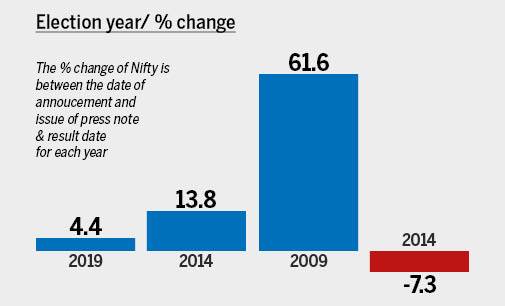 FPIs have been among the largest non-promoter shareholders in Indian stocks for a long time. While markets have witnessed consistent inflows, with a 6.4 per cent ownership (by number of shares) in all-NSE listed companies, their possession has largely remained stable over the years.

It is difficult to build a strong case of optimism about general elections driving FPI investments. Data sourced from Prime Database reveals during general elections in 2014, when the model code of conduct came into force in March 2014, FPI investments in all NSE-listed companies increased to 963 companies from 953 in the previous quarter with the total value of holding increasing from Rs 12,98,540 crore to Rs 13,89,692 crore. Their ownership (in value terms) inched up from 19.5 per cent to 19.7 per cent during the period. However, when the election schedule was announced this year in the March quarter of 2018-19, the FPIs invested in 1,181 NSE-listed companies against 1,197 companies in December quarter of 2018-19. The total value of their holdings, however, increased to Rs 28,99,337 crore from Rs 26,94,241 crore during the period. "FPIs tend to be very quality focussed. They have significant stakes in large-cap companies with investments in major financial, consumer and IT companies," explains Kulkarni. These stocks have done well in last 12 months. Apart from increase in value in these companies, FPI inflows had been significant in February and March, which led to an increase in their holdings, he added. The FPIs had infused Rs 17,219.62 crore and Rs 33,980.56 crore in February and March 2019.

The cherry-picking by FPIs was well demonstrated in their sectoral bets. Net investments share (as percentage of total) in sectors such as finance (especially financial services) and pharma and biotech significantly increased in the last quarter. The financial services share improved from 31.5 per cent in the December quarter to 49.02 per cent in March 2019. The pharmaceuticals and biotechnology space saw an incremental net investment of Rs 2,127 crore over the past two quarters. Professor Muthukrishnan believes financial services with the liquidity overhang has seen some sharp correction and is offering a few value picks. Similarly, we have seen some broader participation in defensives (Pharma) in recent times.

The auto sector has been out of flavour witnessing the highest cumulative sell-offs by FPIs amounting to Rs 17,780 in the past five quarters. Highlighting the twin issues of the automobile sector, Professor Muthukrishnan says that the sector is experiencing a benign outlook due to issues of negative customer sentiment (income drag especially in rural areas) and reduction in credit availability from NBFCs that are facing liquidity issues. The metals and mining too joined the list where these foreign investors pared stakes in the March quarter of FY19 with cumulative net outflows of Rs 3,596 crore since March 2018. Analysts expect financial year 2019-20 to be a year of strong FPI flows, largely driven by global macro environment.