Farmers' protest update: 9th round of talks with govt inconclusive; next meeting on Jan 19 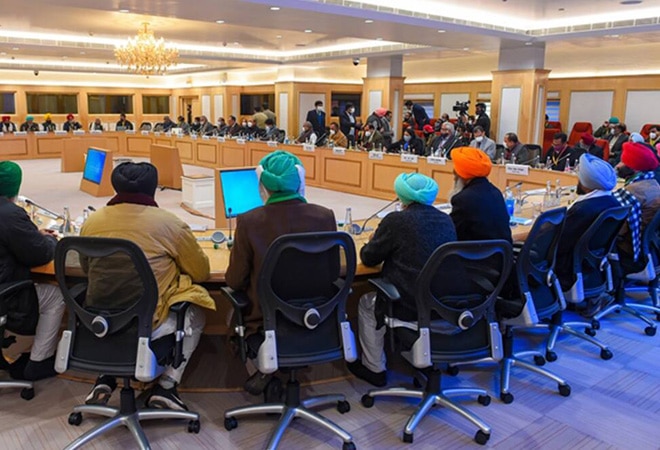 The ninth round of talks between the Centre and the protesting farmers over the new farm laws held on Friday, January 15, at the Vigyan Bhavan concluded with no developments and the next meeting will be held on January 19.

The government and the farmers could not reach a resolution before the lunch break.

Union Agriculture Minister Narendra Singh Tomar said ahead of the meeting, "The government welcomes the Supreme Court order regarding farmers' agitation. The government will put forth its views before the committee (appointed by the court). We are trying to resolve the issue through dialogue."

As the talks started, the Centre reached out to farmers by giving them the option to form a panel with it if they are unhappy with the Supreme Court-appointed committee. The top court suspended the three newly-enacted farm laws and formed a four-member committee to help end the deadlock persisting between the agitating farmers and the Centre.

Leaders of the 40 farmers' unions negotiating with the government have said they want continued direct communication with the Centre, "not through brokers." They maintain that they will not appear before the panel, adding that the appointed members were already in favour of farm laws.

The meeting witnessed no change in the government's stance over the repeal of farm laws.

The farmers have been camping at the Delhi borders for several weeks and are demanding a repeal of farm laws and a legal guarantee to the minimum support price for crops.

India, Japan to partner in Information and Communication