Farmers are currently on their way to the National Capital for the 'Delhi Chalo' protest march against the Central Government's new Farm Laws. Haryana has heavily barricaded the state borders leading to a clash between the protesting farmers and the Haryana Police 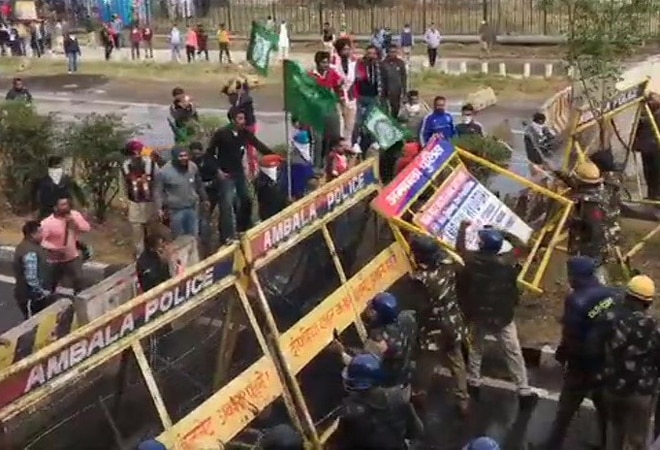 Haryana Police Thursday used water cannons and tear gas at state borders against protesting farmers to stop their 'Delhi Chalo' protest march. The farmers are protesting the new Farm Laws which were recently passed by the Centre. They were allegedly trying to jump across the police barricading to enter Haryana. At the Shambhu inter-state border with Punjab, the police used loudspeakers to tell farmers, who had assembled on the Punjab side, to disperse but some tried to remove the barricades. The situation intensified when protesting farmers threw several police barricades off the bridge into the Ghaggar river. Police resorted to using water cannons and tear gas shells to disperse the farmers.

Here are the LIVE UPDATES of farmers' protest march:

4:25 pm: Security being tightened at the Delhi-Haryana border and barricading is being done in view of the farmers' protest against the new farm laws.

4:10 pm: In Haryana, police used water cannons to disperse farmers who have gathered in Karnal and are now proceeding towards Delhi to protest against the Centre's new farm laws. Here are some visuals posted by news agency ANI:

Haryana: Police use water cannon to disperse farmers who have gathered in Karnal and are proceeding towards Delhi to protest against farm laws. pic.twitter.com/kYbxVCzhpH

4:05 pm: Punjab Chief Minister Amarinder Singh has condemned the Haryana state government's forcible attempt to stop the farmers from marching to Delhi to protest the new Farm Laws. "Why is ML Khattar govt in Haryana stopping the farmers from moving to Delhi? The tyrannical use of brute force against peacefully protesting farmers is totally undemocratic & unconstitutional," he said. He has urged Harayana government to allow farmers to pass through the state and has urged the BJP to ask all its state governemnts to not indulge in stong-arm tactics against the farmers.

Urge @BJP4India to direct their state governments not to indulge in such strong-arm tactics against the farmers. The hands that feed the nation deserve to be held, not pushed aside. pic.twitter.com/N7h2V1wrjr

3:20 pm: Traffic congestion at Delhi-Gurugram border due to checking of vehicles

Need to be watchful about demand sustainability after festivals: Shaktikanta Das