Jan Swasthya Abhiyan (JSA) alleged that despite enacting a National Clinical Establishments Act and subsequent rules, the government failed to notify the standards that are central to the implementation of the Act. 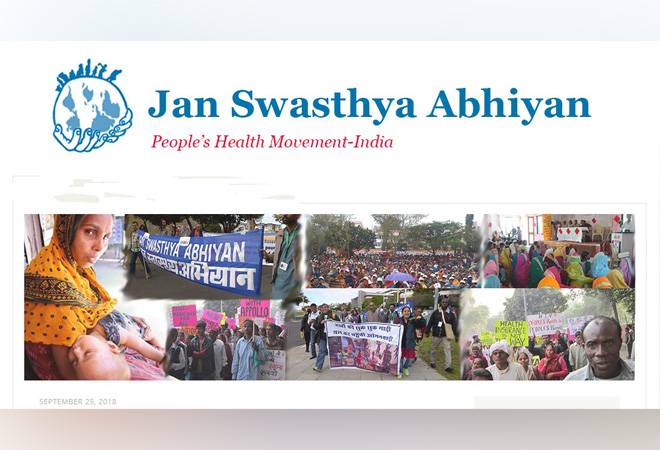 Jan Swasthya Abhiyan (JSA), a national platform of patient groups and civil society organisations, working on health and healthcare services across the country has warned against the Central government's ongoing empanelment of private healthcare institutions in its ambitious Ayushman Bharat programme (Pradhan Mantri Jan Arogya Yojana) without ensuring the patient's interest through mandatory quality standards and transparent pricing in healthcare services. JSA urged Union Health Ministry to finalise and adopt the charter of patient's rights the ministry had proposed in August 2018.

The organisation alleged that despite enacting a National Clinical Establishments Act and subsequent rules, the government failed to notify the standards that are central to the implementation of the Act. "Several states have or are enacting their own State level legislations like the Nursing Homes Act to regulate hospitals. This is good time to incorporate provisions for patient protection into these legislations, which will provide the necessary legislative and regulatory mechanism for ensuring patients' rights," Abhay Shukla of JSA said.

In a national consultation held on January 24, 2019 in New Delhi, JSA members decided to compile the patients' experiences and violations faced by them especially in private hospitals from across the country to highlight the importance of adopting the Charter of Patients' Rights. "The adoption of the charter is urgent to ensure that the many violations of patients' rights are immediately addressed to stop loss of health and even lives. If the charter is not adopted before the Lok Sabha elections, then a large-scale campaign will be taken up by JSA to demand this as an electoral issue," the leaders said.

It is expected that this charter will act as reference framework for the Union Government and State Governments to give complete protection to patients, while they set up operational mechanisms to make these rights functional and enforceable by law. "This is especially important and an urgent need at the present juncture, because India lacks effective regulation of the private medical sector. It is also notable while the present government is actively promoting 'Pradhan Mantri Jan Arogya Yojana' wherein over ten crore households would be supported to seek care in private hospitals, in addition to providing land free of cost in tier 2 and tier 3 cities, there seems to be no corresponding push to ensure that patients are protected from violation of their rights when they access such care," a JSA statement said. "The implementation of the Ayushman Bharat national health insurance scheme through tie-ups with private hospitals made it even more urgent and important to have such mechanisms for patient protection," Shukla added.

In August 2018, the Ministry of Health and Family Welfare announced its plans to implement the Charter of Patient's Rights developed by National Human Rights Commission after a public consultation. The draft was also placed in the public domain for inviting comments up to 30th September 2018. "Although nearly 4 months have elapsed since the declaration of intent, there seems to have been no further progress on finalisation and adoption of the charter," JSA members say.

The group wants the implementation of the Charter of Patients' Rights without any dilution.

The consultation was organised by SATHI, Pune and Sama Resource Group for Women and Health on behalf of JSA, with participation from several patients' rights groups and health activists from across India including states of Maharashtra, Tamil Nadu, Odisha, Uttar Pradesh, Haryana, Rajasthan and Delhi.