The National Capital Region (NCR), Mumbai Metropolitan Region (MMR), Bengaluru, and Pune together accounted for 85 per cent of total sales in Q2 2020 Housing sales and new launches have plunged to a new low across India's top seven cities in Q2 2020. ANAROCK's latest research reveals that residential sales in the quarter plummeted by 81 per cent, from 68,600 units to just 12,720 units, on yearly basis in these cities.

Concurrently, new launches fell by 98 per cent in the period with merely 1,390 units getting launched this quarter. New launches account for just four projects - two in Bengaluru and one each in Pune and Kolkata. A quarter-on-quarter (q-o-q) trend showed housing sales were down by 72 per cent while new launches fell by 97 per cent. Nearly 41,220 units were launched in Q1 2020. 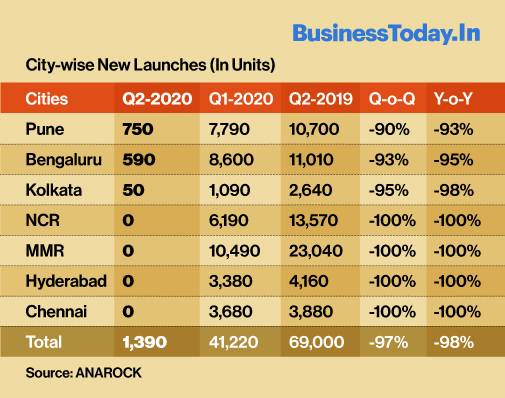 According to Anuj Puri, Chairman, ANAROCK Property Consultants, "A massive drop in both new launches and housing sales were, of course, expected on the back of a complete lockdown for most of this quarter. Interestingly, MMR - one of the most COVID-19-affected cities - witnessed maximum housing sales of nearly 3,620 units among all cities, followed by Bengaluru with approx. 2,990 units. Technology adoption has played a big role in housing sales of late, with many developers now strengthening their digital sales capabilities."

The National Capital Region (NCR), Mumbai Metropolitan Region (MMR), Bengaluru, and Pune together accounted for 85 per cent of total sales in Q2 2020. MMR and NCR witnessed significantly lower sales as compared to previous year and the preceding quarter. Sales in NCR and MMR decreased by 83 per cent each in Q2 2020 against Q2 2019 and 74 per cent each over the previous quarter. Current quarter sales were recorded at nearly 2,100 and 3,620 units, respectively.