In an emotional outburst, Sitharaman asked the Opposition 'who gives you the right to call the Prime Minister 'Chor', just because you come from a khandan (family)'. 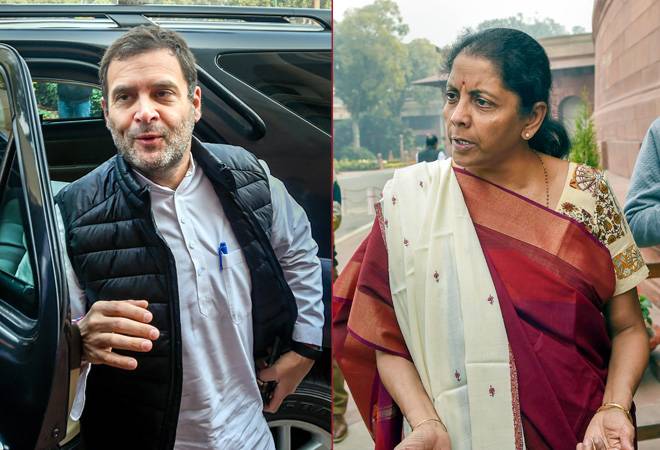 Indian Defence Minister Nirmala  Sitharaman made a direct attack at Congress President Rahul Gandhi while debating the Rafale controversy in the Parliament.

Sitharaman expressed her displeasure at the language used by the Congress leaders to describe the prime minister in the Lower House of the parliament.

In an emotional outburst, Sitharaman asked the Opposition 'who gives you the right to call the Prime Minister 'Chor', just because you come from a khandan (family)'.

Sitharaman criticised  the Congress MPs for shouting her down in the parliament and calling her a 'liar'. Sitharaman said the honour of Prime Minister Modi, who comes from a lower section of the society, was at stake while objecting to the language used by Congress MPs.

Sitharaman said the Prime Minister had worked very hard to reach the position he was in and it was not appropriate to use such unparliamentary language to describe him.

Taking a direct jibe at Rahul Gandhi, Sitharaman said, "Have you apologised after having winked an eye at PM, after hugging the PM? This is not the way a House should run."

Sitharaman's reactions came after Rahul Gandhi said that the defence minister had not answered key questions related to the Rafale deal in her long speech.

In his response to Sitharaman's speech, Congress president Rahul Gandhi once again raised the question as to who decided to give the offset contract under the Rafale deal to Anil Ambani. In his speech, Gandhi said he was told by the French President Emmanuel Macron that Anil Ambani's name was provided to me by the Prime Minister of India.

Gandhi also asked whether any objection was raised from any quarter on changing the original contract for 126 Rafale jets to 36 jets.

To this Sitharaman replied, "Two offset agreements were signed, one with Dassault Aviation and another with MBDA on September 23, 2016, the same day on which the inter-governmental agreement was signed between government of India and government of France for the procurement of 36 Rafale jets in flyaway condition. The government does not put the offset obligations of these equipment manufacturers in the inter-governmental agreement at all, as to who they should go with."

With regards to the offset contact, no Indian private business has been mentioned in the inter-governmental agreement or the offset contract, Sitharaman added

Responding to a clarification sought by Deputy Speaker and Congress leader M Thambi Durai regarding why HAL was overlooked, Sitharaman said that the government is investing to scale up HAL, and the remaining Rafale jets will be made in India. We have issued an RFP through startegic partnership with France that apart from the 36 Rafale jets in flyaway condition, the selected bidder will have to manufacture the rest of jets in India, Sitharaman told the Parliament.

'Why should we eat Maggi with lead in it?' Supreme Court asks Nestle India