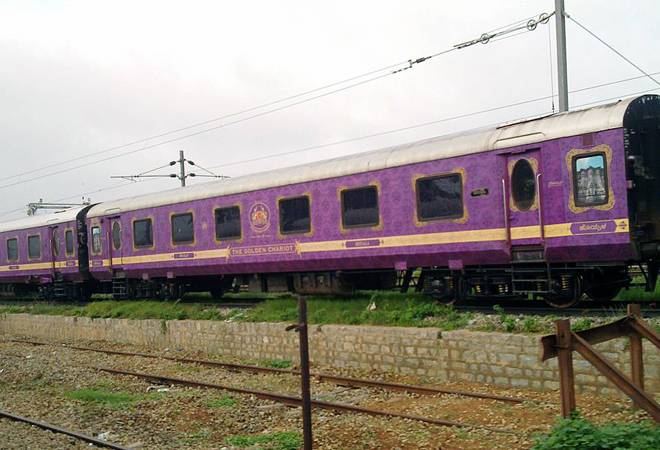 The railway's catering arm IRCTC will resume services of the luxury train Golden Chariot on March 22 after a gap of a few years, officials said on Friday. IRCTC took over the operation, management and marketing of the special train through a recent agreement with Karnataka State Tourism Development Corporation (KSTDC), which launched the Golden Chariot train in 2008.

"The Golden Chariot is again going to hit the tracks in a new look and feel on an exciting week long itinerary. IRCTC has planned three trips of Golden Chariot on 'Pride of Karnataka' itinerary on March 22, March 29 and April 12, 2020. The six nights/seven days itinerary will commence from Yeshwantpur Railway Station in the morning and visit Bandipur National Park, Mysore, Halebidu, Chikmangalur, Hampi, Badami-Pattadakal-Aihole, Goa before returning to Bengaluru," IRCTC said.

The train has undergone a makeover befitting taste of international train travel enthusiasts, it said. To add to the guests' comforts, the train now boasts of several new features, including newly upholstered furniture, elegant drapery, renovated rooms and bathrooms, crockery and cutlery of reputed international brands and fresh linen.

Smart TVs with a variety of Wi-Fi enabled subscriptions of streaming sites, including Netflix, Amazon and Hotstar, have been installed. CCTV cameras and fire alarm system have been added for more safety.

"Experienced chefs have created menus presenting an eclectic mix of mouth watering international as well as domestic fare. The package now comes with selected home made beverages included in the cost with a host of spirits on offer. The guests can continue to enjoy relaxing spa therapies at the on board spa which has also been provided with modern workout machines for the fitness enthusiasts.

"The luxury train tour package cost is inclusive of all on board meals, guided excursions in air-conditioned buses, monument entry fee and meals at outside venues as per the itinerary," it said.

Also read: IRCTC to launch Ramayana Express: All you need to know