Indian Prime Minister Narendra Modi on Friday surprised markets by naming Nirmala Sitharaman, formerly the defence minister, as the next finance minister on a day data showed that Asia's third biggest economy grew at its slowest pace in 17 quarters. 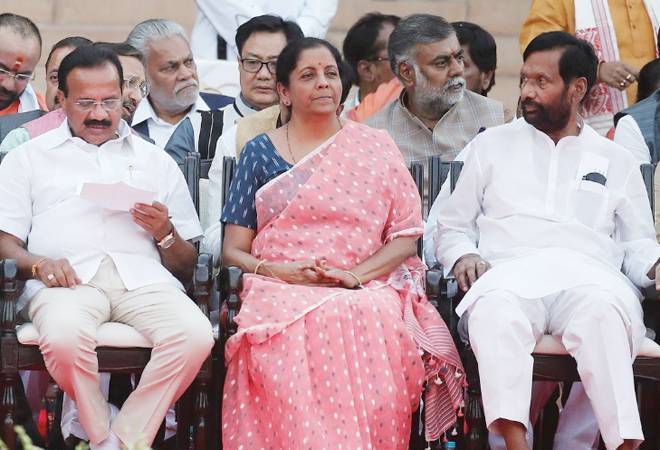 The figures highlight the challenges Sitharaman faces in her biggest government position, and raises the need for an urgent stimulus.

Indian Prime Minister Narendra Modi on Friday surprised markets by naming Nirmala Sitharaman, formerly the defence minister, as the next finance minister on a day data showed that Asia's third biggest economy grew at its slowest pace in 17 quarters. While the economy grew at 5.8% in the January-March period, falling behind China's pace for the first time in nearly two years, the unemployment rate rose to a multi-year high of 6.1% in the 2017/18 fiscal year.

The figures highlight the challenges Sitharaman faces in her biggest government position, and raises the need for an urgent stimulus.

"The new government will first have to address the demand slowdown, which, in turn, requires revitalising the credit channels," said Rupa Rege Nitsure, chief economist at L&T Financial Holdings in Mumbai.

"On a war footing, they will have to address the issues in basic infrastructure sectors like power, roads and railways. While RBI (central bank) can provide a palliative in the form of monetary easing, the government will have to work hard on restoring investment confidence." Sitharaman, who was a commerce minister and briefly the junior finance minister in Modi's first term, got the finance ministry job replacing Arun Jaitley, who opted out of this government due to ill health.

There was also speculation that Amit Shah, chief of the Hindu nationalist Bharatiya Janata Party (BJP), would head to the finance department but Modi instead made him the minister of home affairs.

Unlike Shah and Jaitley, Sitharaman, 59, is seen as a political lightweight.

She is the senior most woman minister in Modi's cabinet and the second woman to head the finance department after late former prime minister Indira Gandhi.

"It is a big surprise and very unexpected news," said Yogesh Nagaonkar, founder and chief executive of Rowan Capital Advisors in Mumbai. "The initial expectation of the market from her would be to see how she addresses liquidity concerns. We need to have good liquidity in the market to achieve growth."

Nagaonkar said the ministry should have gone to Piyush Goyal, a chartered accountant who had stepped into the role twice in the previous government when Jaitley was out sick. Goyal will now be minister of railways and commerce, at a time when trade ties with the United States are straining.

Sitharaman faces pressure from industry for the government to provide some stimulus to halt a worrying slowdown in India's $2.7 trillion economy.

The government is already considering rolling out a slew of 'big-bang' economic reforms in the first 100 days of Modi's second term, with a focus on privatisation of state assets and relaxation of labour and land rules for businesses, a top official at the government's main think tank told Reuters.

In its first meeting, the new cabinet on Friday decided to meet its pledge to expand a programme to give 6,000 rupees ($86) a year to all farmers, and introduced a pension plan for small traders.

Modi also named S. Jaishankar, a former foreign affairs secretary, as India's new external affairs minister. He will take over from Sushma Swaraj, the ruling party's veteran leader and the previous most senior woman in the cabinet. She has also stepped aside due to poor health. This is the first time that a foreign secretary has been appointed as India's foreign minister.

"It shows that the prime minister is serious about foreign policy, and secondly, that he is entrusting it in the hands of a professional," Lalit Mansingh, a former foreign secretary, told Reuters.

No helmet? You won't get fuel at Noida pumps from June 1