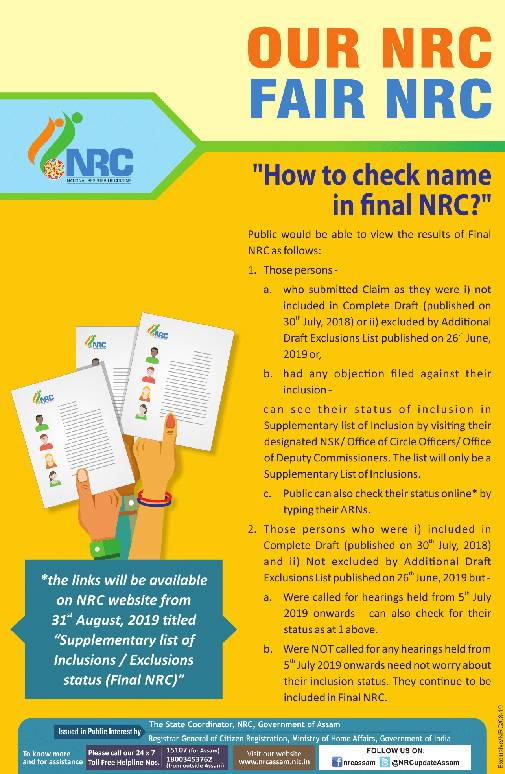 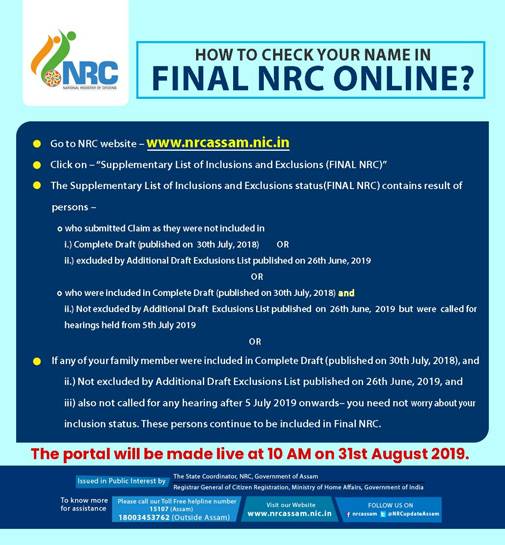 Assam NRC final list: How to check on NRCASSAM.NIC.IN

Citizens in the state can check their names on the NRC Assam exclusion list in the following ways:

2. Click on the tab which says 'complete draft NRC is now active'

3. Enter your Application Reference Number (ARN) to check your name (Your ARN number is printed on the front page of your NRC form)

4. Enter the CAPTCHA code and hit on search

5. Your name would be displayed on the screen if it has been included in the final NRC list.

6. Citizens can also look for their names on the list that will be available in their designated NRC Seva Kendras (NSKs)

7. Additionally, the individuals who have been excluded from the draft NRC will also be informed through a Letter of Information (LOI). The LOI will be dispatched to their residential address.

Residents of the state can also check eligibility for the inclusion of their names in the final NRC list by visiting their respective NRC Sewa Kendra, spread across 2500 NRC service centres, 157 zonal offices and 33 District Deputy Commissioner offices in the state.

"The final list was published at 10 am and the hard copies of the Supplementary List of Inclusions are available for public viewing at the NRC Seva Kendras (NSK), offices of the deputy commissioner and offices of the Circle Officer during office hours," the NRC's State Coordinator's office said. 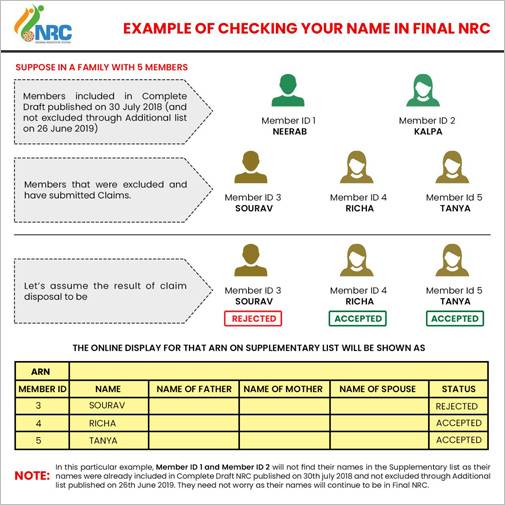 Of the 3.29 crore applicants for the NRC - on July 30, 2018, the final draft excluded the names of almost 40 lakh applicants was published last year.

The people who could view the results would be those who submitted a claim after not being included in the complete draft published on July 30, 2018, or excluded via the additional draft exclusions list published on June 26 this year, or had any objection filed against their inclusion, the NRC authority said.

The Assam NRC final list includes the names of all the citizens who have been residing in the state before March 25, 1971- the cut-off date to be a legal Indian citizen, formalised by the Assam Accord, which was signed by the All Assam Students Union, Assam government and Central government in 1985. To be included in the NRC, one needs to prove with documentary evidence that one or one's ancestors had entered the country before the cut-off date.

Assam Chief Minister Sarbananda Sonowal has said people excluded from the NRC list would get an opportunity to file appeals and be heard in Foreigners' Tribunals (FT) as per the directions from the Union Home Ministry.

As per media reports, more than 3.11 crore out of 3.3 crore applicants were found eligible for inclusion in the final National Register of Citizens, however, over 19 lakh people have been left out. 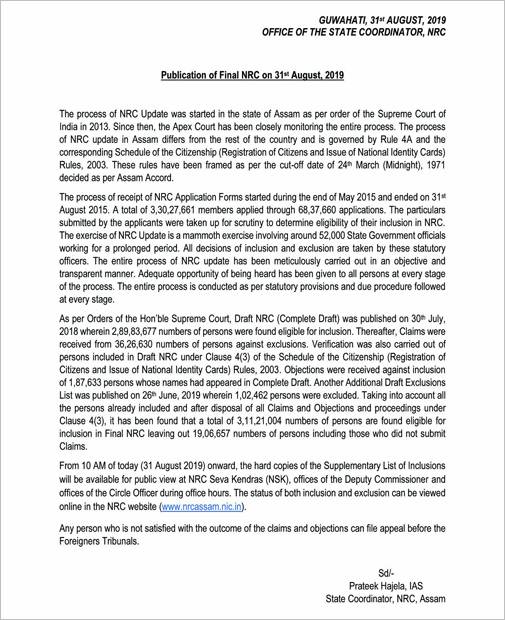