According to experts, farmers commit suicide mainly due to crop failure, damaged crops owing to inclement weather,  lack of water for irrigation, drought issues and poor market prices for their produce Out of the total 15,356 farmer suicides during the six-year period, 396 cases were reported between 1 January 2019 to 28 February 2019. So far, the government has provided ex-gratia to 102 families out of 396 suicide cases, according to RTI activist Shakeel Ahmed.

Following is the statement showing the farmer suicide details from 2013-2018: Below is the district wise statement showing the Farmer Suicide Cases (396 in total) between 1 January to 28 February 2019: 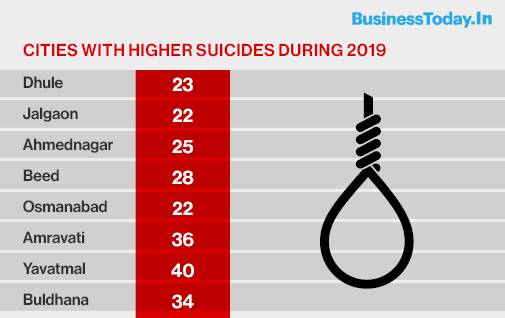 The following places stood out for recording significant number of suicide cases this year: 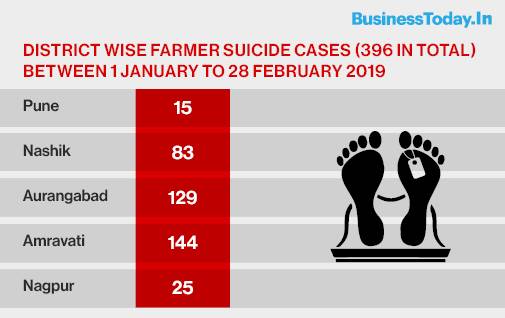 70% of the Indian population is dependent on agriculture. The farmers toil day and night to feed the countrymen and keep them alive. But these very farmers have been living in crisis for years and nothing substantial has been done to elevate them from the present condition, says RTI activist Shakeel Ahmend.

The issue of the farmer suicides comes in the run-up to the 2019 Assembly elections. While the BJP-Shiv Sena alliance have blamed NCP supremo and former Union agriculture minister Sharad Pawar and his policies for farmer suicides in the state, opposition Congress and NCP have blamed the state government for the deaths of 15,000 farmers in the last five years.

According to experts, farmers commit suicide mainly due to crop failure, damaged crops owing to inclement weather,  lack of water for irrigation, drought issues and poor market prices for their produce. Like previous years, this year too several parts of Maharashtra have been facing severe drought-like conditions.

Earlier in June, the Maharashtra government had released a data of farmer suicides which stated that 12,021 allegedly committed suicide between 2015 and 2018. Of these, 6,845 farmers have been given financial assistance of Rs 1 lakh each.

Polling for all 288 Assembly seats in Maharashtra will be held on October 21 and counting of votes will take place on October 24. The state boasts over 8.9 crore eligible voters. The BJP and the Shiv Sena will contest the election together against the Congress-NCP alliance. In 2014 polls, the BJP had won 122 out of 288-seats, while Sena bagged 63. The Congress-NCP alliance managed only a combined 83 seats.