The flag hoisted by the youth, Nishan Sahib is a religious flag belonging to the Sikh community and can be found on every gurudwara 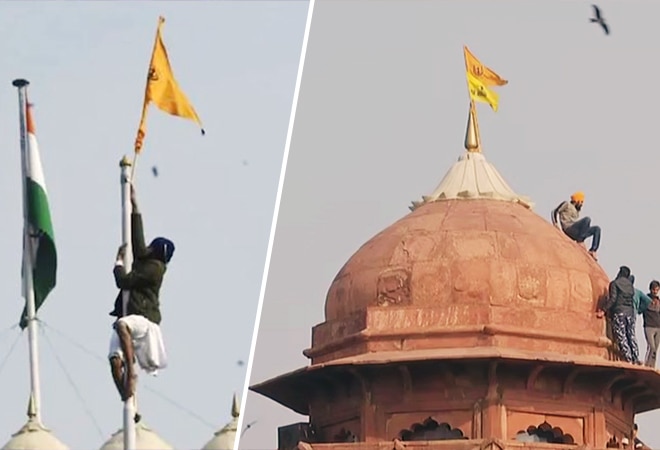 A youngster from Punjab's Tara Singh village named Jugraj Singh is reported to be the protestor who unfurled the Nishan Sahib, a flag belonging to the Sikh community at the Red Fort as chaos unfolded at Red Fort on Republic Day. Jugraj Singh's father and grandfather have expressed happiness and appreciated him for "showing bravery".

The flag hoisted by the youth, Nishan Sahib is a religious flag belonging to the Sikh community and can be found on every gurudwara. The yellow-coloured flag has a blue sign known as 'khanda' in the middle. The Khanda comprises a double-edged sword and a chakra, according to an India Today report.

Delhi: One of the protestors puts flags atop a dome at Red Fort pic.twitter.com/brGXnpkFiP

The national capital witnessed scenes of pandemonium as the farmers violated the pre-decided route for the tractor parade and entered the Red Fort premises after clashing with the Delhi Police officials at ITO intersection. In order to prevent the situation from getting out of control, cops had to use tear gas shelling and lathi charge as the farmers pelted stones.

Meanwhile, commuters had a tough time as entry and exit gates of Lal Qila and Jama Masjid metro stations continue to remain shut. Due to the farmers' agitation, Ghazipur Phool Mandi, NH-9 and NH-24 have been closed by the Delhi Police. Commuters travelling from Delhi to Ghaziabad are, thus, advised to use alternate routes from Kakdi Bhed, Shahdara and DND.

After this incident, Congress MP and former Under Secretary-General at the UN, Shashi Tharoor said, "Most unfortunate, I have supported the farmers' protests. And on Republic Day no flag but the sacred tiranga shouls fly aloft the Red Fort."

Also read: Why Internet is slow today in parts of Delhi-NCR