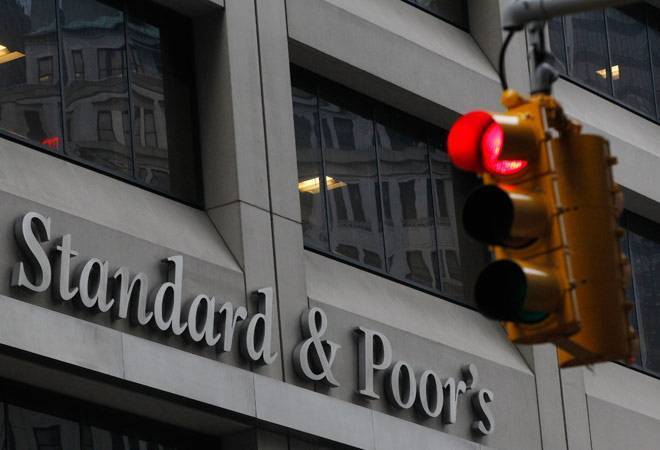 Standard & Poor said the ratings reflect India's improved monetary credibility. "The outlook indicates that we do not expect to change our rating on India this year or next, based on our current set of forecasts." It affirmed A-3 short-term sovereign credit rating on India. Fiscal deficit will stay broadly in line with our expectations, it said.

Last week, credit ratings agency Moody's had upgraded India's sovereign rating to Baa2 from Baa3 and changed the outlook on the rating to stable from positive after a gap of 13 years. The agency said the reforms initiated by the Indian government could improve the business climate, productivity, stimulating foreign and domestic investment, and hence fostering strong and sustainable growth.

However, S&P cautioned a downward pressure on ratings if fiscal deficit rises significantly and political will for new reforms is gone. Commenting on the upcoming state election in Gujarat, S&P said it expects the BJP to further consolidate wins in state elections. NDA's consolidation is expected to give a BJP majority in the Rajya Sabha, it added.

Speaking to ANI, Railway Minister Piyush Goyal, said, "It's an affirmation of the policies of the government being recognised worldwide. S&P has given an overall positive outlook with much praise for Modi govt's initiative."

"Didn't expect any upgrade from S&P at this time. Moody's has done 2 upgrades so far and S&P is known to be conservative," Goyal added.

Here's what S&P stated in its report:

Despite two-quarters of weaker-than-expected growth, India's economy is forecast to grow robustly in 2018-2020 and foreign exchange reserves will continue to rise.

We are affirming our 'BBB-' long-term and 'A-3' short-term sovereign credit ratings on India.
The stable outlook reflects our view that, over the next two years, growth will remain strong, India will maintain its sound external accounts position, and fiscal deficits will remain broadly in line with our forecasts.

On Nov. 24, 2017, S&P Global Ratings affirmed its unsolicited long- and short-term foreign and local currency sovereign credit ratings on the Republic of India at 'BBB-/A-3'. The outlook is stable.

The stable outlook reflects our view that, over the next two years, growth will remain strong, India will maintain its sound external accounts position, and fiscal deficits will remain broadly in line with our forecasts. Upward pressure on the ratings could build if the government's reforms markedly improve its net general government fiscal out-turns and so reduce the level of net general government debt. Upward pressure could also build if India's external accounts strengthen significantly.

Downward pressure on the ratings could emerge if GDP growth disappoints, causing us to reassess our view of trend growth; if net general government deficits rose significantly; or if the political will to maintain India's reform agenda significantly lost momentum.

Institutional And Economic Profile: The ruling party continues to consolidate its power at the state level and, despite obstacles to the implementation of reform, strong growth is likely to continue

Narendra Modi's coalition, led by the Bharatiya Janata Party (BJP), has further consolidated power in state-level elections in 2017 and we expect it to make further gains.

One-off factors, such as demonetization and the imposition of a goods and services tax, have led to some quarterly cooling in India's high growth figures.

Nevertheless, the medium-term outlook for growth remains favorable, based on private consumption, an ambitious public infrastructure investment program, and a bank restructuring plan that should help revive investment.

The coalition has also managed to pass a number of reforms to address long-standing impediments to the country's growth. These include comprehensive tax reforms through the introduction, on July 1, 2017, of a goods and services tax (GST) to replace the complex and distortive system of domestic indirect taxes. Other measures include a Bankruptcy Code and nonperforming loan resolution framework; a plan to recapitalize state-owned banks; a plan to strengthen the business climate by simplifying regulations and improving contract enforcement and trade; and reforms to the energy sector.

However, confidence and GDP growth in 2017 appear to have been hit by the sudden demonetization exercise in late 2016 (by which high-value cash notes of Indian rupee [INR] 500 and above, which constituted about 85% of the country's cash stock, were replaced with new notes, in an effort to curb tax evasion). The July 1, 2017 introduction of the GST, which combines the central, state, and local-level indirect taxes into one, has also led to some one-off teething problems that have dampened growth.

Nevertheless, in the medium term, we anticipate that growth will be supported by the planned recapitalization of state-owned banks, which is likely to spur on new lending within the economy. Public-sector-led infrastructure investment, notably in the road sector, will also stimulate economic activity, while private consumption will remain robust. The removal of barriers to domestic trade tied to the imposition of GST should also support GDP growth.

Ratings are constrained by India's low wealth levels, measured by GDP per capita, which we estimate at close to US$2,000 in 2017, the lowest of all investment-grade sovereigns that we rate (see "Sovereign Risk Indicators," Oct. 13, 2017, also available at www.spratings.com/sri). That said, India's GDP growth rate is among the fastest of all investment-grade sovereigns, and we expect real GDP to average 7.6% over 2017-2020 (6.5% in per capita terms).

Flexibility And External Performance Profile: Ongoing expenditure pressure at both the central government and state level will ensure fiscal consolidation remains slow, but India's external position is a strength.

Given the planned ramp-up in public-sector-led infrastructure investment and the persistent deficits, especially at the state level, fiscal consolidation will remain difficult. The rupee's liquidity in international foreign exchange markets will continue to buttress our external assessment. Recapitalization of state-owned banks is likely to pave the way for some improvement in credit expansion from 2018.

India's external position remains a credit strength. According to the "Triennial Central Bank Survey," published on April 2016 by the Bank for International Settlements (BIS), the rupee was traded in 1.1% of all foreign exchange transactions globally. We therefore consider the rupee to be an actively traded currency, which increases India's ability to finance external imbalances. The recent increased issuance of offshore rupee-denominated bonds (masala bonds) is a testament to this flexibility.

We forecast that India's external debt, net of liquid public and financial sector external assets, will average a modest 8.4% of current account receipts over 2017-2020. The level of economywide external indebtedness is likely to remain contained throughout the forecast period, underpinned by an improved current account deficit, which we forecast will average 1.8% over 2017-2020, down from the 2.3 per cent level recorded on average between 2011-2016. Recent narrowing has been driven by robust exports and lower global oil prices. The Reserve Bank of India's foreign exchange reserves stood at above US$400 billion in October 2017, amounting to over six months of import cover, a sizable buffer.

Against the backdrop of the planned ramp-up in public-sector-led infrastructure investments, as well as persistent deficits at the state level, the large general government debt load and India's overall weak public finances continue to constrain the ratings. India has a long history of high net general government fiscal deficits (net of liquid assets, deficits averaged over 8% of GDP over the past 20 years and 7 per cent in the past five years). The planned large infrastructure investment program is likely to limit expenditure flexibility, even though the government is likely to be able to tap private sector funds for the construction of many of these infrastructure projects.

In addition to expenditure demands, the country's fiscal challenges also reflect revenue underperformance compared with most peers at the rating level. India's general government revenue, at an estimated 22% of 2017 GDP, is low compared with peer sovereigns. Administrative efforts to expand the tax base-including demonetization (which has increased the number of tax registrants) and the introduction of the GST in July-corroborate our belief that government revenues will accelerate into the forecast period.

Although we expect central government to broadly succeed in controlling deficits at the federal level, we foresee that problems at the state level will add 3 per cent on average to the consolidated general government deficits over the forecast horizon.

India has a two-tier banking sector. Its private sector and foreign banks amount to about 30 per cent of the banking system, with the public sector amounting to 70 per cent. The private sector banks have better profitability and higher internal capital generation, and are better capitalized with lower-stressed assets than government-owned banks. Given their weaker profitability, we estimate that public-sector banks will need a capital infusion of about US$30 billion to need capital to make large haircuts on loans to viable stressed projects and meet the rising requirement of Basel III capital norms.

In October 2017, the government committed to a capital infusion plan of roughly that size, partially financed by the government itself and the rest raised via other sources. We include planned recapitalization costs to our assumptions of the sovereign's general government debt issuance. Our Bank Industry Credit Risk Assessment for India is '5' (with '1' being the strongest assessment and '10' the weakest). Nevertheless, combining our view of India's government-related entities and its financial system, we view the country's contingent fiscal risks as limited.
The Reserve Bank of India (RBI) has made substantial progress in lowering consumer price index (CPI) inflation following the introduction in February 2015 of its medium-term inflation target band (with 4 per cent CPI inflation plus or minus 2 per cent as the principal nominal anchor for monetary policy), aided by broadly lower oil prices and other factors. Other steps taken to strengthen policy formulation include the introduction of the monetary policy committee framework, improved communication, and efforts to strengthen monetary policy transmission (for example, through new guidelines requiring banks to determine their lending rates using marginal cost of funds). These have also helped improve monetary effectiveness. We expect the RBI to continue to achieve its inflation targets. We believe these RBI measures will support its ability to sustain economic growth while attenuating economic or financial shocks.

Government to auction up to 21 GW solar, wind capacity by March 2018