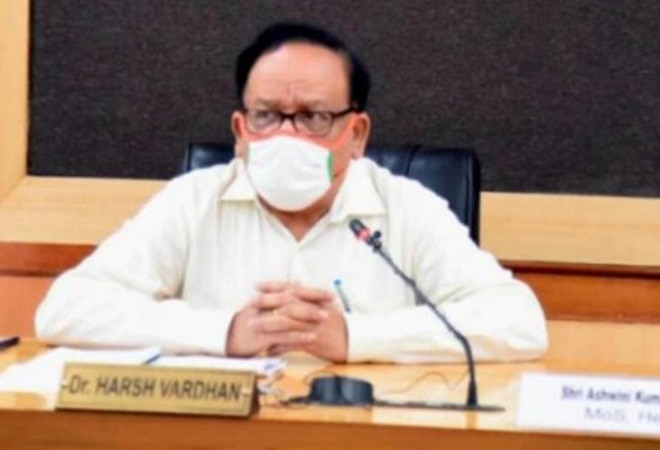 Union Health Minister Harsh Vardhan has said that one of the major reasons for the spike in coronavirus cases was people not following COVID-appropriate behaviour.

Vardhan explained that although the situation is under control, lax behaviour in following the protocols is the main culprit behind the surge in cases. The Union minister noted that the sudden rise in cases is largely or maybe event-driven comprising local body elections, grand weddings, and farmers' protest.

"This has come to our notice that the sudden increase in cases is largely or maybe event-driven, including grand weddings, local body election, farmer's protest, etc.," Vardhan said on Tuesday.

He also appealed to people to take up mass awareness campaigns to revive the importance of such measures in the populace.

Vardhan, who held a review meeting with health ministers of 11 states and UTs (Union Territories) where the coronavirus cases are on the rise, noted that these states together contributed 54% of the total caseload and 65% of the total fatalities in the country, with a lopsidedly high count of deaths in Maharashtra and Punjab.

"In last two months, the country witnessed a sudden surge of COVID-19 cases. When our active cases were low... Our recovery rate is 92.38 per cent. Despite the increasing cases, the fatality rate is at 1.30 per cent of the country," he said.

Vardhan further said that a high-test positivity rate was being witnessed in Maharashtra (25%) and Chhattisgarh (14%). He noted that since February, these states have seen a significant rise in coronavirus cases, the majority of which have been reported in the younger population of 15-44 years, the Union Health Ministry said in a statement.

Meanwhile, Vardhan lauded the increase in tests undertaken in the last four weeks but warned against the high RAT (rapid antibody test) proportion in Chhattisgarh, Gujarat, Himachal Pradesh, and Maharashtra.

Also Read: Not every person in the world will be vaccinated, says Harsh Vardhan

"No shortage of Covid-19 vaccines"

The Union minister further clarified that there was no shortage of vaccine stock in the country and that the Centre has assured the states that they will get the vaccines as per their requirement. "The Centre will not allow any state to face vaccine scarcity," he said.

Vardhan's statement came after Maharashtra Health Minister Rajesh Tope told reporters that the state might run out of coronavirus vaccine in three days.

"No state is facing vaccine scarcity and neither will we allow them to face it. All states are being supplied with Covid-19 vaccine as per their requirements," Vardhan said.

"This was communicated to all states at the beginning of the meeting on Tuesday. I had assured them that there would be no shortage of vaccines and the supply will continue as per requirement," the Union health minister added.

According to the Maharashtra government, the state presently has a stock of only 14 lakh vaccine doses that will last only for three days. Likewise, Andhra Pradesh, which currently holds only 2.7 lakh vaccines, expects it to be exhausted by Thursday.