Joe Biden, 78, is the oldest president in the history of the United States. He was able to defeat Donald Trump in a bitter contest in 2020 elections. Concerns have been raised regarding Biden's health 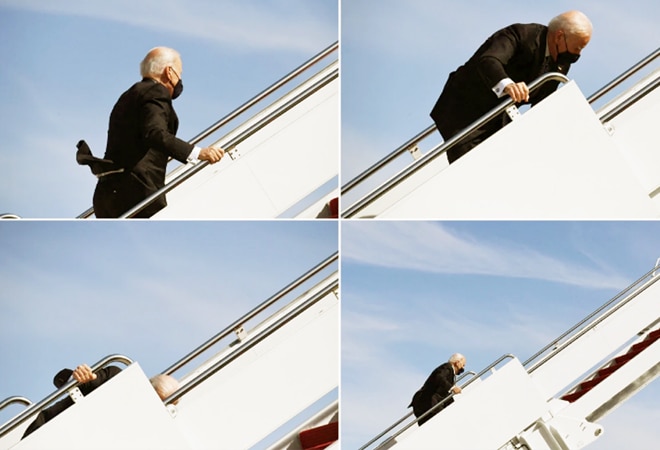 US President Joe Biden stumbled upon a staircase thrice while he was boarding his Air Force One plane on Friday. The incident happened as Biden headed to meet Asian-American community leaders after a major shooting at a parlour this week. The US President can be seen holding on the side railings of the staircase and heading up to board the plane when he fell once, and then again two times before he could gain balance.

The video of the incident has gone viral on social media. After composing himself, the US President later gave a customary salute from the top of the staircase as he entered the plane.

WATCH: Biden falls three times trying to climb the stairs to board Air Force One pic.twitter.com/IfDUjLPQB4

Joe Biden, 78, is the oldest president in the history of the United States. He was able to defeat Donald Trump in a bitter contest during the 2020 elections. Meanwhile, the White House has said Biden was "doing fine". Press Secretary Karine Jean-Pierre told White House pool reporters Biden was "100 per cent" fine.

"It was very windy. I almost fell coming up the steps myself. He is doing 100 per cent," she said, reported The Independent, adding that "he's preparing for the trip just fine".

Notably, concerns have been raised regarding Biden's health. He had last year suffered a hairline fracture in his right foot while playing with his dog Major. Trump's campaign also attacked him over his fitness and Trump even coined the term "sleepy Joe", which is used more often during poll campaigning.

WHO approves AstraZeneca's COVID-19 jab due to 'tremendous potential'