A report generated by TRAI's MySpeed app reveals that Reliance Jio was way ahead of its rivals, Airtel, Idea and Vodafone in terms of 4G download speed in the month of February. Although the app shows that Jio's performance in February was better than its performance in January, it is still marginally less than its speed in December last year.

The other major operators fared slightly worse than their speeds in January, making Jio the only operator to perform better than January. Airtel, Idea and Vodafone all marked a slight decline from the first month of the year. When it came to 4G upload speeds, it was an entirely different story altogether. Idea topped the list in February with 6.9 mbps, while Vodafone touched 5.5 mbps, followed by Reliance Jio with 4.5 mbps and Airtel finishing last with 3.9 mbps. Out of the four, Vodafone was the only operator to see a dip in speeds from January. In January, Idea clocked 6.7 mbps, Vodafone touched 6.1 mbps, Jio managed 4.4 mbps and Airtel marked 3.8 mbps. 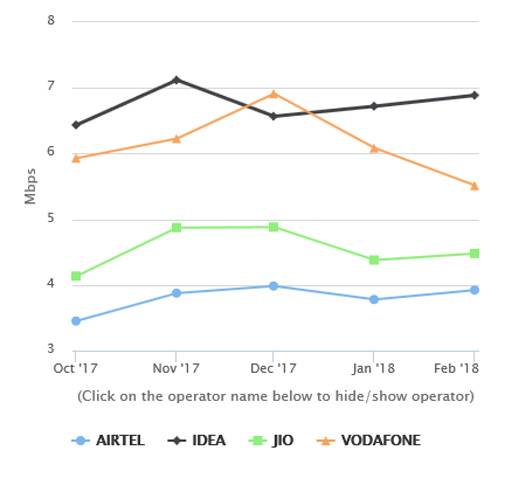 When it came to 4G coverage, Reliance Jio topped the list followed by Airtel, Vodafone and finally Idea.

The competition in the Indian telecom industry is very fierce now. With players like Aircel exiting the game, the competition now centres on the four major telcos. To take on Reliance Jio, two of the giants - Vodafone and Idea Cellular - are merging to form a new entity. While the finer details of the merger are still being processed, the merger is supposed to be completed by May. Vodafone would hold 45.1% of the entity, Idea promoters would hold 26%, while the rest would be held by the public.