Regulator puts onus on you to identify pesky call numbers but commercial SMSes will continue.

Instead of banning unsolicited telemarketing calls or doling out deterrent punishment to errant telecom service providers, the Telecom Regulatory Authority of India (TRAI) has once again put the onus of blocking unwanted calls on the long-suffering consumer. 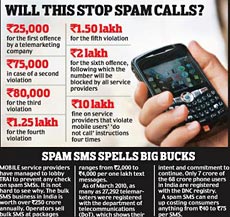 In new guidelines released on Monday, TRAI yet again failed to address consumers in its bid to "regulate" pesky calls. Ignoring the plea of millions of mobile subscribers, and ignoring the Supreme Court's observations on the matter, TRAI has allowed unsolicited commercial calls and messages to continue unchecked.

Its big " pro- consumer" move? Tele- marketers will now have to use numbers beginning with '700' to make these calls. It is up to users at the receiving end of these intrusive calls to see the number and not take the call if they so wish.

Many consumers have been forced to pay astronomical bills for receiving such calls while roaming abroad - an SMS while travelling abroad can cost the receiver anywhere between Rs 40 and Rs 60. The '700' series numbers will be operational from January 2011.

Meanwhile, millions of spam SMS will continue to be sent out daily, since TRAI, despite repeated pleas by consumer groups, has failed to address the issue once again.

"There is no clear thinking in the TRAI," said Colonel (Retd) S. N. Aggarwal, a Delhi- based consumer activist. It seems as if it is hand- in- glove with the operators. We also fail to understand why the telecom ministry remains a mute spectator when there is such resistance against pesky calls and SMSs intruding into everyone's personal lives." However, TRAI has upped the penalties on errant telemarketing firms and operators to curb the menace of unsolicited calls and messages. According to an official, TRAI has proposed to impose penalties ranging from Rs 25,000 for the first complaint, and up to Rs 2 lakh for repeat offences. After the sixth complaint, the number will be blocked. Service providers that violate mobile users' "Do Not Call" instructions four times face a fine of up to Rs10 lakh.

Currently, there is a paltry penalty of Rs500 and Rs1,000 on telemarketers who call numbers listed in the NDNC (National Do Not Call) directory. All the telemarketing companies will have to submit security deposits with the service providers in advance.

Tata Teleservices Ltd (TTSL) and other operators who have been resisting derailing telemarketing business have no problems with proposed penalties by the TRAI. "We have no issues with the quantum of fines proposed," said a senior telecom company official who did not wish to be identified.

It will be the responsibility of both telemarketing firms, as well as service providers, to ensure that subscribers who have opted for not getting such calls are not harassed by telemarketers, as per the new TRAI guidelines.

This is unlikely to happen, say telecom experts. Noted telecom analyst Dilip Sahay said this will not deter operators from continuing with the business. "The IT Amendment Act 2008 does not have provisions to deal with telemarketers. Telemarketing and self- regulation do not go together," he stated.

The existing NDNC directory, which has utterly failed to curb the menace, will be replaced by a new regime under which subscribers will also have the choice of getting telemarketing calls - if they want - from specific segments of the market for a time period decided by them.

Under the new system, too, subscribers will have to register their numbers with operators.

The new regulations will make it mandatory for the operators to stop unsolicited marketing calls within seven days of registration.

At present, there is a provision of 45 days for operators to upload their numbers.

Unsolicited commercial calls and SMSs are one of the major issues of concern for telecom subscribers and has become an irritant for mobile phone users across the country. This has resulted in large number of complaints.

The government had earlier formed a NDNC Registry in 2007. However, consumers continued to complain about unsolicited commercial communications by way of calls, as well as SMSs. On August 12 this year, TRAI had organised an open house discussion on the issue with various stake holders where telecom operators virtually sabotaged and hijacked the discussions, leaving no chance for consumers to put across their view.

Despite the TRAI's new initiative, subscribers are not very hopeful that this will help curb the pesky calls and message menace by telemarketers.

Atul Rastogi, who works with Delhi University, said, "Telemarketers' business runs into in many thousands of crores.

They will not mind paying whatever price TRAI fixes as penalty."