The month of July witnessed a total of 34 mergers and acquisitions (M&As) valued at $393 million.

The month of July witnessed a total of 34 mergers and acquisitions (M&As) valued at $393 million. This was 24 per cent lower than what was witnessed in the same month last year, according to a report by Grant Thornton. The key reason seems to be the low level of domestic M&A transactions. "What explains this decline is the fact that most M&A transactions were in a 'wait and watch' situation, owing to the focus on GST implementation," says Prashant Mehra, Partner, Grant Thornton India LLP.

Cross-border M&As continue to be on a decline because, instead of outbound, the focus seems to have shifted to domestic activity, and inbound is further delayed because of GST implementation.

In July, tepid M&A activity led to more than 67 per cent y-o-y decline in deal values, while slow traction in PE investment volumes led to deal volumes declining by over 30 per cent y-o-y, the report added. M&A values recorded a 73-month low at $393 million with domestic deals falling over 11 times compared to the level recorded in July 2016, while cross-border deals declined by 94 per cent. This was primarily due to the absence of big ticket transactions this month. 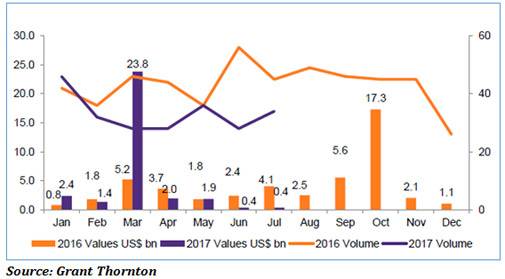 Overall deal activity in year-till-date (YTD) demonstrated a robust 54 per cent increase in the values, while volumes declined by 21 per cent. "A significant increase in high-value transactions - which include deals estimated at $100 million and above - with 48 such deals in M&A and PE, together contributed to around 85 per cent of total deal values in YTD 2017," the report states.

Further, it says big-value transactions led to a strong 62 per cent increase in M&A values with one mega deal valued at $23 billion, and 23 deals valued at more than $100 million, together contributing to over 92 per cent of the total M&A deal values.

Banking sector led the deal activity by contributing over 26 per cent of the total deal value. This was primarily driven by the National Multi Commodity Exchange's merger with Indian commodity exchange, creating India's third biggest commodity exchange according to sources. As per the report, increasing consolidation drove deal volumes in the start-up sector, capturing 25 per cent of volumes with the highest activity witnessed in the enterprise application and infrastructure space. However, in a couple of months, M&A bounce-back is expected. "The remaining five months of 2017 should continue to see reasonable growth in M&A, but the key growth in transactions will perhaps be led by domestic M&A. With domestic reforms in play, inbound interest should gradually pick up more towards the last quarter of 2017. Further, with the rupee becoming stronger and corporate balance sheets gradually becoming thicker, outbound activity is also expected to pick up in the last quarter of 2017.

Overall, the transaction space looks good. Clocking over $32 billion in deal values already, this year is expected to see a growth rate of 20 per cent over 2016," adds Mehra.