Finance Minister Nirmala Sitharaman said that under the Special Festival Advance scheme will be available up to March 31, 2021 and will be given as a prepaid RuPay card

Addressing the media about proposals to stimulate demand in the economy hit by COVID-19 pandemic, Sitharaman also announced another proposal which is the Leave Travel Concession (LTC) cash voucher.

She added that the schemes (announced) will focus on boosting consumer spending as well as capital expenditure as part of the Centre's fresh push to revive the economy.

"The proposals being presented are designed in a way that they can stimulate demand by front-loading/advancing some of the expenditure with some offsetting changes. Others are directly linked to an increase in the GDP," the finance minister said. 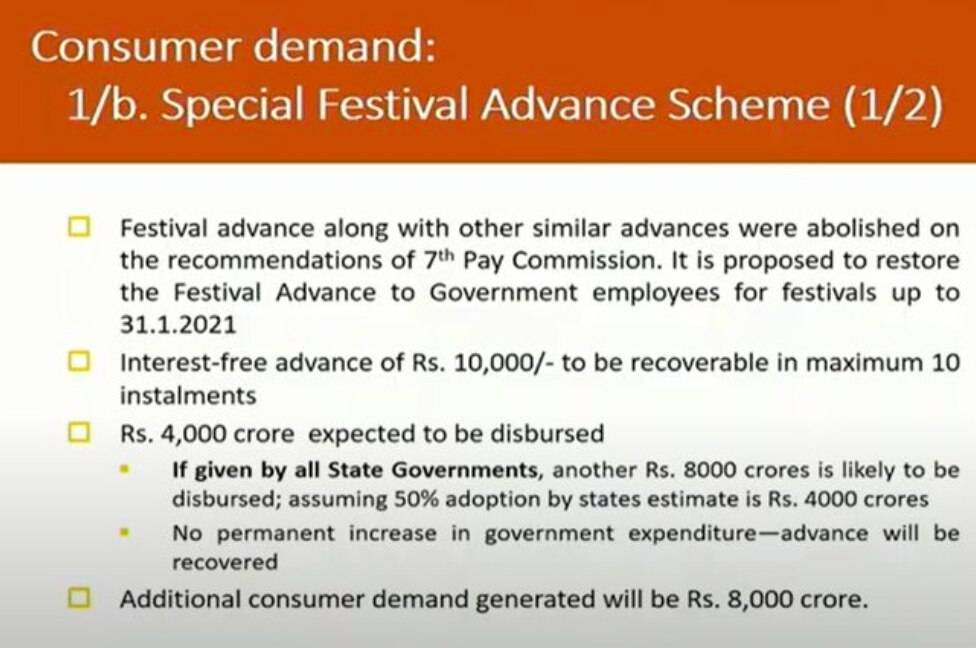 Under the Special Festival Advance scheme, Sitharaman said that the scheme will be available up to March 31, 2021 and will be given as a prepaid RuPay card. The festival advance earlier for non-gazetted employees stood at Rs 4,500, however, this was repealed under the 7th Pay Commission.

"Special Festival Advance Scheme for non-gazetted employees is being revived as a one-time measure, for gazetted employees too. All central govt. employees can now get an interest-free advance of Rs 10,000, in the form of a prepaid RuPay Card, to be spent by March 31, 2021," Sitharaman said.

She went on to add that the one-time disbursement of the scheme is likely to amount to Rs 4,000 crore. "If given by all state governments, another Rs. 8,000 crores is expected to be disbursed. Employees can spend this on any festival," she said, adding that an interest-free advance of Rs 10,000 under the Special Festival Advance Scheme is to be paid back in 10 instalments.

Meanwhile, under the LTC Cash Voucher scheme, all government employees can choose to get the cash amount to leave encashment plus three times the ticket fare, to purchase items which attract a GST of 12% or more.

The finance minister further stated that only digital transactions will be permitted and a GST invoice will have to be furnished.