Centre's expenditure 240% of income this fiscal; deficit at 7.7%

A sharp increase in government expenditure in proportion to revenue collection, though, is not because govt has increased spending but because of poor revenue and disinvestment collections

Most assets have been reallocated to more needy sectors like rural development, health and agriculture sectors

The government of India has spent 2.4 times (240 per cent) its earnings this financial year between April and October in FY 2020-21. Against the total receipts of Rs 2 lakh crore (including tax, non-tax revenues and capital receipts) in the April-October period, the expenditure has been Rs 16.6 lakh crore. During the same time last year, the central government had earned Rs 9.3 lakh crore, while spending nearly Rs 16.55 lakh crore, around 1.77 times the earnings.

This sharp increase in the government expenditure in proportion to revenue collection, though, is not because it has increased spending but due to poor revenue and disinvestment collections. 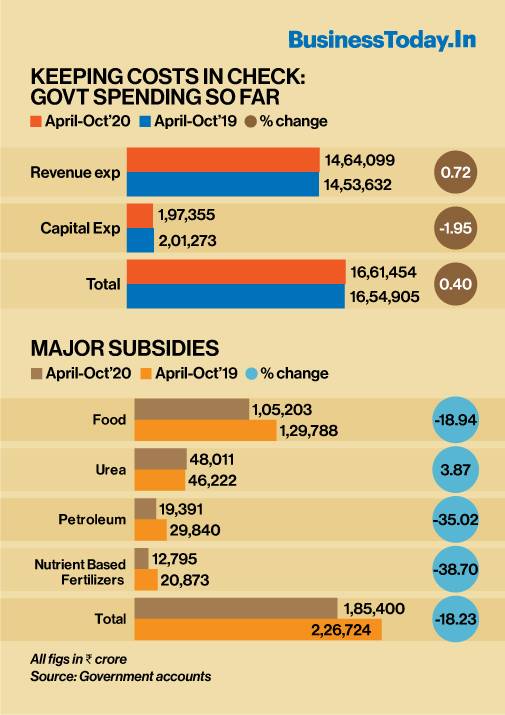 The government has managed to keep its expenses in check despite multiple rounds of stimulus packages announced to tackle the Covid-19 situation. The total expenditure in the first seven months of the current financial year (April-October 2020) registered a 0.4% increase over the last year.

On the other hand, net tax collections for the central government have seen a sharp decline, primarily because of the lockdown-induced slowdown in economic activities.

Non-tax revenues (which include dividends from CPSEs and PSU banks) of the government in the first seven months of the current financial year has been Rs 1.16 lakh crore, almost half of what it collected last year (Rs 2.24 lakh crore). Another big contributor to the government coffer is disinvestment proceeds. However, due to Covid-19 pandemic, the government hasn't been able to push through some of the big ticket sales of PSUs like BPCL, CONCOR, etc.

However, the Centre has been able to keep a check on the expenses, primarily by reallocating assets to more needy sectors like rural development, health and agriculture sectors, while drastically cutting expenses on education, petroleum subsidy and food and public distribution. It has also spent less on capital expenditure (money spent on creation of infrastructure and other assets) vis-a-vis last year.

Economists and experts are of the opinion that the government might be able to keep its full year expenditure lower than budgeted target of Rs 30.4 lakh crore.

According to Aditi Nayar, principal economist, ICRA, the government's total expenditure could be around Rs 30.2 lakh crore in 2020-21, mildly lower than the budgeted level, despite the fiscal support measures that have been announced so far.

However, Nayar estimates the net central government receipt -- tax, non-tax revenue and capital receipts -- will fall short by Rs 6.5 lakh from the budget estimate of Rs 22.5 lakh crore, taking the fiscal deficit to Rs 14.5 lakh crore, or 7.7% of the GDP.

The government has, so far, maintained that its fiscal deficit would not cross more than Rs 12 lakh crore as it has stuck to its borrowing plan target of 12 lakh crore.