Addressing the media, ISRO chairman, K Sivan said that the space agency lost contact with the Vikram lander, when the mission was at an altitude of 2.1 kilometres from the surface of the moon.
BusinessToday.In

However, all is not lost though, as the Orbiter which ferried lander Vikram and rover Pragyan to the Moon's orbit remains functional. The Indian space agency is now examining available information to ascertain what went wrong at the last minute with the soft landing of Vikram.

Reacting to the development, various leaders of the country including PM Modi, President Ram Nath Kovind encouraged the scientists of ISRO. They asked the space agency to not lose hope.

PM Narendra Modi who was also present at the ISRO Centre in Bengaluru. After losing contact with the lander Vikram, he consoled the scientists at ISRO and tweeted "Nation is proud of you."

India is proud of our scientists! They've given their best and have always made India proud. These are moments to be courageous, and courageous we will be!

Mahindra Group CEO Anand Mahindra took to Twitter and posted a motivational message for the ISRO scientists. Anand Mahindra later shared an inspiring note, saying that Chandrayaan's Vikram Lander is whispering to the nation and saying, "If at first, you don't succeed, try, try again". 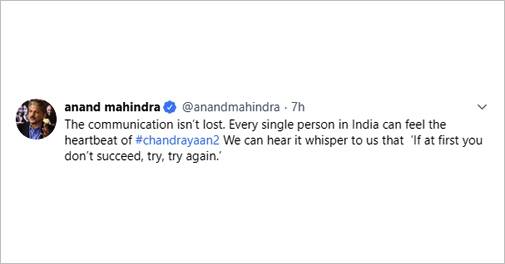 With #Chandrayaan2 Mission, the entire team of ISRO has shown exemplary commitment and courage. The country is proud of @ISRO. We all hope for the best #PresidentKovind

There is nothing to despair. ISRO only lost communication with the Lander & not the hopes of 1.3 billion Indians. The Orbiter with its payloads is performing its mission. @isro #Chandrayaan2

India is proud of @isro and its team of scientists. The ISRO's mission to reach the Moon is bound to succeed.

Their courage and commitment will ultimately make it successful. I wish team ISRO a great success in their future endeavours.

Defence Minister Rajnath Singh lauded the courage of Isro scientists and said that Isro's mission to reach moon is bound to succeed.

Bhutan PM Lotay Tshering:We are proud of India and its scientists today. #Chandrayaan2 saw some challenges last minute but courage and hard work you have shown are historical. Knowing Prime Minister Narendra Modi.I have no doubt he and his #ISRO team will make it happen one day pic.twitter.com/AA8B2vXx8o

ISRO's achievement with getting Chandrayaan-2 so far has made every Indian proud.

India stands with our committed and hard working scientists at @isro.

My best wishes for future endeavours.

We are with you @isro. You have brought the nation, it's young minds and all, together in sensing your achievements in Space. You will succeed.

What a phenomenal achievement!!!! We are there..... we shall remain hopeful and courageous and have no doubt that we will cover the last mile.....SOON

Heartiest congratulations to our scientists.....your work and huge efforts make us proud. India salutes you!

There are no failures, only temporary roadblocks to the achievements of our goals. We are proud of every single @isro scientist for what they have been able to achieve till now.

We are all with you and hope for the best for the future!#Chandrayaan2Live#VikramLander

Journey of #Chandrayaan2 so far and what lies ahead is no less than an achievement. We are proud of our scientists and confident that India's space programme only gets stronger & better from here. Team @isro - a proud, grateful & an inspired nation stands with you!

We are with you @isro. Proud of you to have dared to land at south pole of the moon where no one else has ever attempted. Your capabilities and achievements have always made our country stand tall. This is just a success postponed. #Chandrayaan2

Every Indian is proud of the exceptional achievements of @isro. The challenging times will make us stronger and better. As we prepare ourselves for the future, remember what PM Shri @NarendraModi said, 'the best is yet to come'. #Chandrayan2

That embrace & hand on your shoulder is the support of a billionIndians,

A proud, rising and determined nation.

Congress leader Rahul Gandhi congratulated the space agency for the magnificent work and said that it is an inspiration for every Indian.

Congratulations to the team at #ISRO for their incredible work on the Chandrayaan 2 Moon Mission. Your passion & dedication is an inspiration to every Indian. Your work is not in vain. It has laid the foundation for many more path breaking & ambitious Indian space missions.

As the team at ISRO awaits to analyse the data, Twitterati shared words to uplift the morale of scientists:

'Country is proud of you. I am with you, move ahead with courage. I wish you all the Best' , says PM @narendramodi to ISRO scientists after Chairman Dr K Sivan announced that the communication from Vikram Lander was lost.#Chandrayaan2#Chandrayan2 #Chandrayaan2Live

If you fail ,never give up because FAIL MEANS,FIRST ATTEMPT IN LEARNING. END is not the end ,if fact End means EFFORT NEVER DIES.IF you get NO as answer, remember NO MEANS ,NEXT OPPORTUNITY.

A Big Salute for Our Hardworking Scientists #Chandrayan2 pic.twitter.com/rl9X7WzJ0H

Best work of scientists of @isro congratulations we are proud of you There is still a lot of expections https://t.co/3fDKz6fe3u

Dear @isro, You lost the Communication, not Confidence, not Commitment, not Courage, not Challenge.

We all Indians stand with You. Thank you for everything. You made us Proud.#Chandrayan2.

Only 5% of the mission has been lost - Vikram, the lander, and Pragyan, the rover. The remaining 95%, that is the Chandrayaan 2 orbiter, is orbiting the moon successfully. It's definetly not a failure. Let's not lose the hope, we're still there to achieve many more. #Chandrayan2 pic.twitter.com/gcDOiE1Zkk

I am really moved by this video

Hard work of a person is seen in this video, hats off to Mr. Sivan sir.

Our honorable prime minister modiji is giving confidence to ISRO team when it is much needed #Chandrayaan2Landing #Chandrayan2 pic.twitter.com/wmna3XumJa

Dear @isro, the whole nation is proud of your efforts and achievements. Failure is not final & failure is not fatal: it is the courage to continue that counts. I am sure through your sheer hard work and efforts, you will continue to make us proud! #ISRO #Chandrayan2 #ProudIndian pic.twitter.com/OgjBV5FAiH

We will not give up and @isro will do it soon #Chandrayan2 - an endeavour that may have already ignited the scientific temperament of many young minds. https://t.co/dm5giUnTrV