Voluntary contributions account for Rs 3,075.8 crore as of March 31
BusinessToday.In

The Prime Minister's Office (PMO) has revealed PM CARES Fund received donations worth Rs 3,076 crore in the first five days of its formation. The data was released in the first audited report of payments and receipts of the PM CARES Fund for FY20. The fund was set up with initial investment worth Rs 2.25 lakh on March 27. 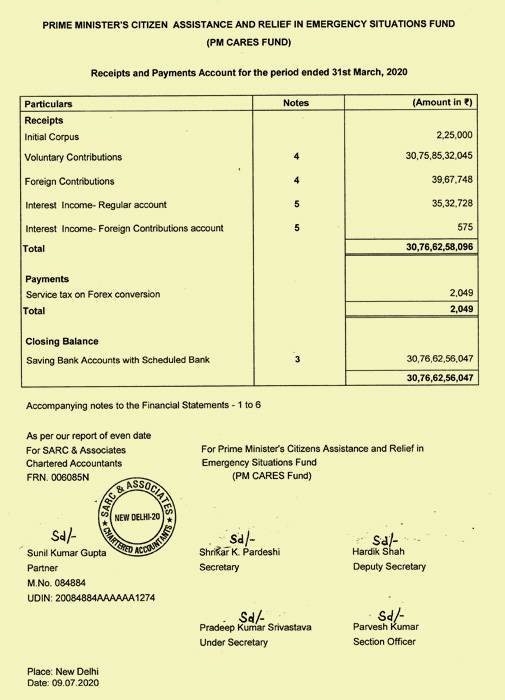 Like PM National Relief Fund (PMNRF), the PM CARES fund report does not specify who contributed how much for the fund.

Established on March 27, 2020, PM CARES (Prime Minister's Citizen Assistance and Relief in Emergency Situations) Fund Trust intends to deal with any kind of emergency or distress situation, such as the COVID-19 pandemic. The trust is headed by Prime Minister (ex-Officio) and other ex-officio Members of the trust are Defence Minister, Home Minister and Finance Minister.

It accepts voluntary contributions by individuals/organisations as well as contributions as part of CSR from Companies/Public Sector Undertakings (PSUs). However, the trust does not accept contributions flowing out of budgetary sources of the PSUs.

Opposition parties, including the Congress, have time and again raised questions on the utility and advantages of having a separate fund when the PMNRF (Prime Minister's National Relief Fund) is for the same purpose. The PM CARES Fund tries to differentiate itself from PMNRF by enabling micro-donations. The statement issued by the government specifically says the fund will enable micro-donations.

Why PMO shying away from revealing names: Chidambaram

The Congress has slammed the PMO for not revealing the names of the donors. "The auditors of PM CARES FUND have confirmed that the Fund received Rs 3,076 crore in just 5 days between March 26 and 31, 2020. But the names of these generous donors will not be revealed. Why?" Asked senior Congress leader P Chidambaram.