Rupee hits all-time low; here’s how it may impact your life

With the rupee hitting an all-time low, imports, foreign education, and travel could all get expensive. Here’s why.

Rupee hit an all-time low against the US Dollar on Monday, bringing further bad news for the economy that is already reeling under high inflation. The Rupee dropped 51 paise to an all-time low of 77.41, surpassing the previous low of 76.98 in March.

The Rupee has been staggering since the beginning of the year. Foreign funds have pulled out $17.7 billion from Indian equities this year already.

Sharat Chandra, Vice President of Research and Development, Earth ID, said that taming inflation will be an uphill task in such a scenario. However, Heena Naik- Research Analyst - Currency, Angel One Ltd was more optimistic about the depreciating Rupee.

“This negative trend in Rupee is temporary as markets are expected to be braced by IPO-related inflows which shall provide support to the Indian Rupee,” said Naik. 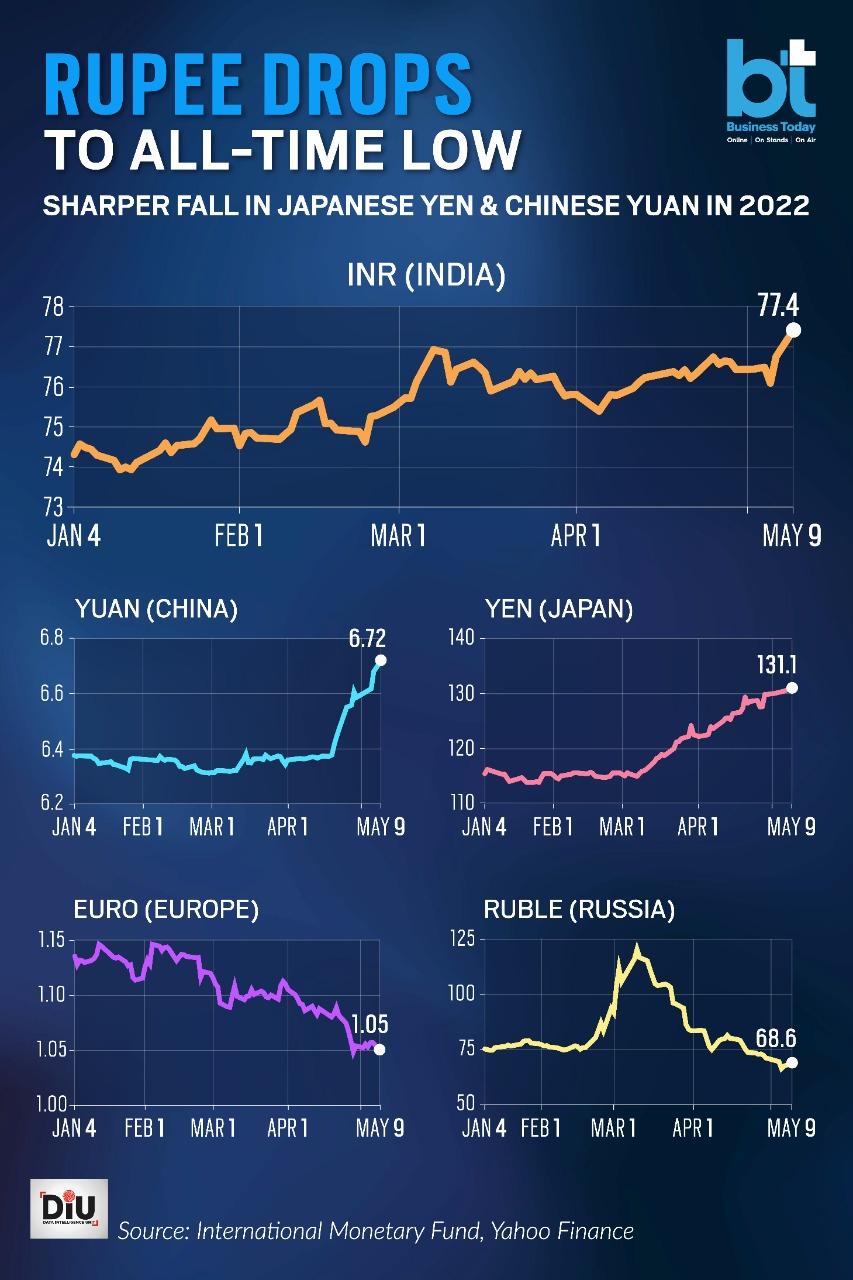 Chandra, however said, "The depreciating Yuan has led to the fall of many Asian and emerging market currencies, but the Indian rupee hitting new lows is worrisome for the economy because India, one of the biggest importers of crude oil, is more vulnerable to rising crude oil prices. This would also increase the trade deficit resulting in an expected current account deficit of 3 per cent and impacting the balance of payments. RBI's data suggests that India's current account deficit (CAD) increased to US$ 23.0 billion (2.7 per cent of GDP) in Q3:2021-22 from US$ 9.9 billion. In this context, taming inflation is going to be an uphill task for RBI. High-interest rates may force Indian businesses to cut down on capital expenditure."

How it will impact your life

The depreciating Rupee is likely to have a direct impact on your spendings.

Imports: Importers need to buy Dollars to pay for imported items. With the dip in Rupee, importing items will get more expensive. Oil imports will get costlier, which can directly impact consumers.

Additionally, other imported items as well as components are also likely to get costlier, which will increase the prices for consumers. This means that cars and appliances are likely to get expensive.

Escalating prices might accelerate inflation, which is already high currently.

Loans: There is likely to be an indirect impact on loans. As Rupee depreciates, import prices go up, making items and commodities more expensive. This pushes inflation. Now, with rising inflation, RBI resorts to altering the repo rate – which has already been hiked by 40 bps to 4.40 per cent. High repo rates means banks increase their lending rates, making EMIs costlier. Banks have already increased their loan rates.

Inflation and repo rates move in the same direction. Interest rates are hiked to stabilise inflation. High rates will make borrowing costlier, discouraging consumers and businesses to spend on big-ticket items. In short, it will limit the money supply for the purchase of riskier assets. High repo rate reverses the wealth effect and makes banks more cautious about lending.

Cars, other items: With depreciating Rupee, imported items such as luxury cars, or even car components are likely to get expensive. This means that the eventual price of such items will go high.

Moreover items that require imported components, such as phones and appliances are also likely to get costly.

Stocks: Rupee depreciation is also the effect of foreign investors pulling out of Indian equities. This means that there could be a sharp fall in equity markets, resulting in a decline in stock and equity mutual funds investments.

Foreign education: As Rupee loses value against the US Dollar, foreign education would get more expensive. This will be because one will have to give more Rupees for every Dollar due to its depreciation. So students abroad or ones who are planning to move abroad will have to restructure their budget.

Foreign travel: This is the season of foreign travel with upcoming summer vacations. Additionally, travellers were expecting to finally take a trip abroad with relaxing COVID-19 cases. Hence this is disappointing news for consumers who were expecting and planning holidays abroad, as they will now have to spend more.

Remittances: However, non-resident Indians (NRIs) who send money back home will end up sending more in Rupee value.

RBI intervention: The central bank can release Dollars to bring volatility in control. But the forex pile has fallen below $600 billion for the first time in a year. In 2022, forex has depleted by $36 billion. It remains to be seen how the RBI navigates with these figures in mind.