Names from political corridors, business world and A-list stars gathered at the engagement gala of Akash Ambani and Shloka Mehta to bless the couple. Celebrations in the run up to the wedding of Akash Ambani and Shloka Mehta continued on Sunday. Kith and kin of the Ambani family gathered to attend the engagement party of the couple on Sunday. After a star-studded engagement bash on Thursday, Mukesh and Neeta Ambani hosted another party for friends and relatives at their residence Antilia today evening.

The guest list at the party included political figures, faces from the business world and some close aides of the Ambani family from Bollwood. Anil Ambani, Mukesh Ambani's younger brother, reached Antilia with his wife Tina Ambani to give his blessings to the couple.

The luxurious 27-floor Antilia, where Akash and Shloka will observe the engagement rituals, has been decorated in and out in preparation for the ceremony. Floral decorations have been coordinated by Karen Tran, a high profile floral designer from California. Rest of the event is being managed by luxury wedding planner Seven Steps Wedding.

To satisfy the taste buds of the VIP and A-list guests, catering is being looked after by Foodlink Banquets and Catering. The highlight of the evening though is Laudrey, the French luxury bakery from Paris known for its delectable macarons. As per earlier reports, international gourmet brands from London and New York have also been roped in to bring delicaciees from around the world at the engagement gala.

Here's a glance at the Ambani clan during the engagement bash: 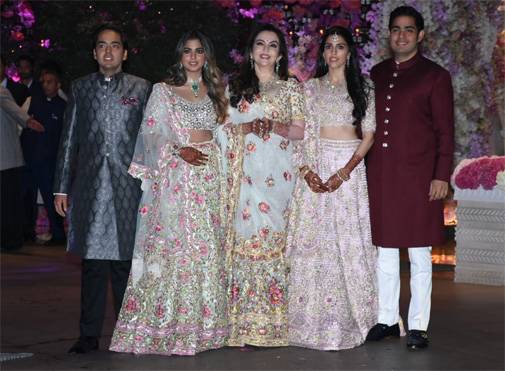 The news of Akash, the eldest son of Mukesh Ambani and Neeta Ambani, and Shloka Mehta, daughter of diamond businessman Russell Mehta first surfaced earlier this year. They exchanged rings at an informal ceremony in Goa in March. While the wedding ceremony is expected to happen sometime in December this year, the Ambani family is yet to confirm the date.

And the wedding bells will keep ringing. Keep in mind that Isha Ambani, Akash's twin sister, is also likely to marry Anand Piramal, son of business tycoon Ajay Piramal, in December. They got engaged in May this year.