Political parties are going all out to woo women voters not only because they account for half the voter base but also on account of their growing political assertiveness. 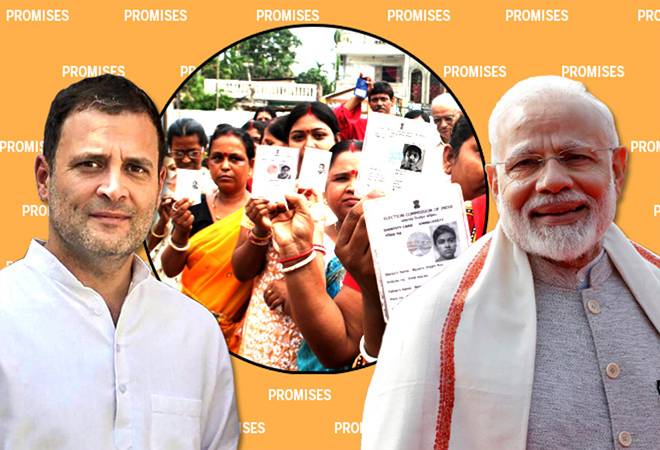 With women accounting for near half the voter base- and given their growing political assertiveness- it's hardly surprising that most political parties have gone all out to woo this demographic in their respective manifestoes. According to a Centrum Broking report titled Election 2019 - The Swing Factor, the actual turnout of women voters is increasing at a rate faster than that of the opposite sex and this year could even see their turnout exceed that of the men. "As is evident, women voters are agents of change; they vote differently than men and can affect re-election prospects," the report stated.

So here's a look at what the BJP and the Congress have promised women should they be voted into power:

1. The ruling party has promised 33% reservation in parliament and state assemblies through a constitutional amendment.

2. Article 44 of the Constitution of India lists Uniform Civil Code as one of the Directive Principles of State Policy. "BJP believes that there cannot be gender equality till such time India adopts a Uniform Civil Code, which protects the rights of all women, and the BJP reiterates its stand" to draw one up, read the manifesto.

3. The BJP promised to legislate a bill to prohibit and eliminate practices such as Triple Talaq and Nikah Halala.

4. Promising to further build on the government's 'Beti Bachao, Beti Padhao' programme, the manifesto promised to ensure that ample financial support is available to girls throughout their education and "subsidised education loans" are provided for higher education.

5. "We are committed to make women equal partners in and equal beneficiaries of the progress and prosperity of the nation and will formulate a comprehensive 'Women in Workforce' roadmap focussed on dramatically increasing the female workforce participation rate over the next five years. We will also encourage industries and corporates to generate better employment opportunities for women," read the manifesto.

6. In order to generate better work opportunities for women, the BJP promised that 10% of the material to be sourced for government procurement will be from MSMEs employing at least 50% women in their workforce. This will cover a range of import substitution items, from apparel to stone items like idols and furniture to toys.

7. "In the next 5 years, to ensure financial empowerment among women in rural and semi-rural areas and create better employment opportunities for them, we will make every effort to ensure access to credit and other resources, capacity building, market and distribution network for women entrepreneurs, SHGs and women farmers," the party promised.

8. The party also pledged to ensure easily available reproductive and menstrual health services for all women across India. Furthermore, with the expansion of ongoing Suvidha scheme, it promised that sanitary pads will be provided to all women and girls at just Re 1.

9. Having already made the creche facility mandatory for any establishment with 50 or more employees, the BJP promised to strengthen the programme in the next five years, with special focus on the needs of parents employed in the unorganized sector by leveraging the existing Anganwadis, civil society organisations and the private sector. "We will ensure that the number of childcare facilities is increased three-fold by 2022," it added.

10. The coverage of the Ayushman Bharat will be expanded to include all Anganwadi workers and ASHA workers.

11. "Women's security will be given more priority. We have constituted the Women's Security Division in the Home Ministry, and have made strict provisions for transferring the laws in order to commit crimes against women, in particular in a time-bound investigation and trail for rape. In such cases, forensic facilities and fast track courts will be expanded to bring convicts to justice," the manifesto added.

12. The BJP promised to formulate a dedicated programme for the creation of work opportunities and providing skill training as well as to strengthen social security mechanism for the widows of martyrs.

13. Special attention will be given to encourage sporting talent among women as well as tribals under the 'Khelo India' scheme.

1. "We will amend the Service Rules to reserve for women 33 per cent of appointments to posts in the Central Government," stated the Congress manifesto

2. In addition, the Equal Remuneration Act, 1976 will be enforced effectively if the party is voted into power. "We will review all laws that stipulate wage rates to provide that men and women are paid the same wage for similar work," it stated.

3. The party promised to ensure that State police forces reserve 33 per cent of all vacancies in direct recruitment and promotion for women constables and officers. Similarly, it promised to achieve a minimum of 33 per cent in the force strength of CISF, CRPF and BSF while "every effort" will be made to induct more women into the other border guarding forces like ITBP, SSB and Assam Rifles.

4. Apart from providing fiscal incentives to businesses that employ a certain percentage of women, the party promised to launch two major programmes - Repair and restoration of water bodies ('Water Bodies Restoration Mission') and Regeneration and afforestation of wasteland and degraded land ('Wasteland Regeneration Mission'). These two programmes, to be implemented through Gram Sabhas and urban local bodies, are pegged to create 1 crore jobs.

5. "Congress promises to work with State Governments to digitise land ownership and land tenancy records and, in particular, recognise ownership and tenancy rights of women farmers and ensure women get the benefits of agriculture-related schemes," the manifesto added.

8. Every Special Economic Zone will have working women's hostels and safe transport facilities to increase the participation of women in the labour force. "We will repeal any provision of law that prohibits night shifts for women," it added.

10. It also promised to expand ICDS and provide a creche in every Anganwadi based on need and demand.

11. The party promised a comprehensive review of the Sexual Harassment of Women at Workplaces Act, 2013 and added that the Act will be extended to all workplaces. In a similar vein, Congress promised to pass a model legislation to establish a separate investigative agency to investigate heinous crimes against women and children.

12. Like the BJP it promised to allocate sufficient funds to promote sports among girls and women along with persons with disabilities and disadvantaged groups such as Scheduled Tribes.