External benchmarking will not only expedite transmission but will also help borrowers compare future interest rates across banks.

Banks are quick to raise interest rates whenever the Reserve Bank of India (RBI) increases the repurchase (repo) rate. However, they act slowly in passing on the benefit of a rate cut to borrowers. The RBI has taken several measures - linking loans with internal benchmarks such as base rate and marginal-cost-based lending rate (MCLR) - to make the way banks fix interest rates more transparent. But the results have not been encouraging. Banks continue to charge borrowers arbitrarily, using internal benchmarks and spreads.

Enter external benchmarking. Under the new mechanism proposed by the RBI, banks will have to price their loans on the basis of external benchmarks such as the repo rate, the 91-day treasury bill yield, the 182-day T-bill yield or any other benchmark market interest rate produced by the Financial Benchmarks India instead of the internal benchmark MCLR. The new system was supposed to come into effect from April 1 but the RBI has postponed it till further consultations with stakeholders.

The RBI cut rates multiple times in 2015. "In a span of a little over a year, it slashed the repo rate by 125 basis points. By comparison, banks reduced lending rates by only 60-70 basis points during that period. This prompted the RBI to introduce the MCLR to bring in optimum transmission of rates to borrowers in response to changes made in the repo rate by the central bank. However, it didn't pan out that way," says Rishi Mehra, CEO, Wishfin.com Besides the opacity in internal benchmarking, another issue involves the spread that banks charge over and above the MCLR or base rate. They usually find a way to offset the reduction in rates for existing borrowers by raising a part of the spread. "A large reduction in MCLR is partly offset by some banks by a simultaneous increase in the spread in the form of business strategy premium, ostensibly to reduce the pass-through to lending rates," says a report by an RBI Study Group.

Ideally, the spread should remain constant throughout the loan tenure for borrowers with similar risk profiles. "The spreads are mostly changed arbitrarily for similar quality borrowers. While the spread over the MCLR is expected to play a small role in determining the lending rates, it turns out to be a key element in deciding the overall lending rates. This has made the entire process opaque. It impedes the monetary transmission," says the RBI study. 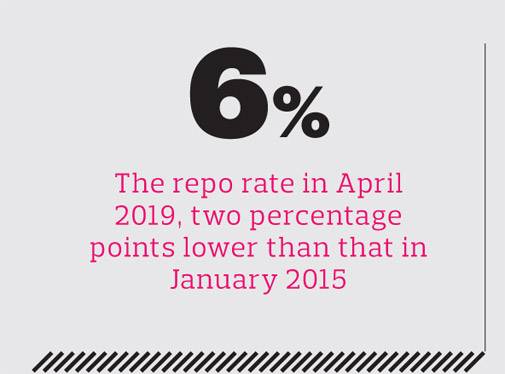 Banks also manipulate the system to attract new borrowers, who receive attractive rates, while old borrowers are the last to get the reduction benefit. Most borrowers are unaware of changes unless their equated monthly instalments (EMIs) change. As a home loan transfer involves processing fees and a lot of documentation, most borrowers hesitate in transferring loans. This works in the banks' favour.

With external benchmark, you need not wait for banks to inform you about the change in interest rates. You can monitor it yourself. Banks will not be able to change the spread either to offset the fall in the benchmark rate. Although they will have complete discretion in fixing the spread, once decided, it will remain unchanged throughout the loan tenure. The spread will change only if the borrower's credit assessment undergoes a substantial change. Besides, banks can't fix different benchmarks for different loans under the same loan category once they fix it.

Although borrowers could compare interest rates across lenders at the time of taking the loan, they could not estimate the future move because of the opaque internal benchmarking. That will change now. "Customers will simply compare spreads across banks and choose the bank based on lower spreads as benchmark rates would remain the same," says C.S. Sudheer, Founder and CEO, IndianMoney.com. Banks can charge risk premium based on the risk profile of individual borrowers. A disciplined borrower will have more bargaining power. "If borrowers have a good credit score, they can negotiate for a fair deal under the external benchmarking system. Existing borrowers can opt for balance transfer (home loan refinance) and enjoy lower rates under the new system," adds Sudheer.

Moreover, the new benchmarking will not remain limited to home loans. "All floating loan rates will get impacted by the external benchmarking. It can even impact personal loans if provided on a floating basis," says Mehra.

Will external benchmarking apply to non-banking finance companies (NBFCs)? The RBI is yet to give clarity on this. But even if it doesn't apply on NBFCs, they will have to tweak rates to stay competitive. "If banks move to the external benchmarking regime, borrowers prefer banks over NBFCs. As banks start passing on reduced funding cost to customers during falling interest rate regime, NBFCs will have to do the same," explains Sudheer.

While the final RBI guideline on implementing external benchmarking is yet to come out, when it does, it will potentially be one of the most borrower-friendly reforms in lending.