For Jyoti Deshpande, life is not about survival, but to conquer the imaginations of the on- and off-screen audience. 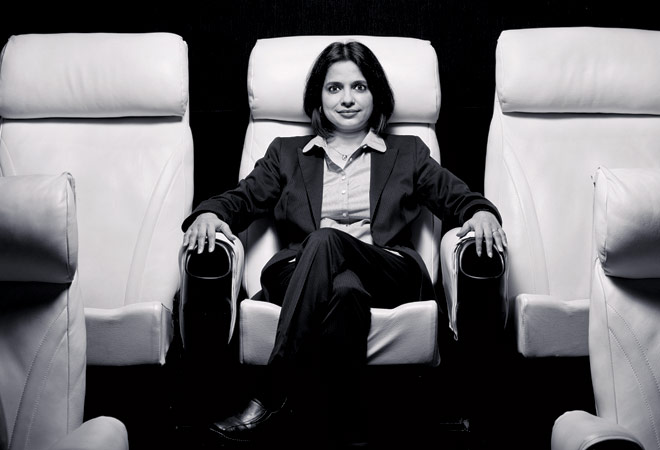 In the hot seat: After conquering the big screen, Eros International Group CEO and MD Jyoti Deshpande is poised to make it big on the small screen (Photo: Rachit Goswami)

Six-month-old girl gets pneumonia. Time comes for polio vaccine. Family doctor administers it. Next morning, girl is unable to crawl. Left leg gets afflicted by polio. Thinks positive. Plays cricket with boys. Becomes head girl in government-aided school. While in college, gives tuitions to students from second to 12th standard to collect money for MBA. Does MBA from top B-school SP Jain Institute of Management and Research* in Mumbai. Meets heartthrob in class. Marries him and moves to the UK. Joins Zee TV. Meets the owner of a movie distribution company. Convinces him to start his own television channel and joins his company. Decides to start producing films by acquiring rights of titles as they are being produced. Starts own productions, with movie stars as co-producers. Turns company into the Indian film industry's biggest, most powerful film-making and distributing entity. Where she is the Group CEO and Managing Director. Churns out hit after hit, taking the company to new frontiers of success... Phew!

Sounds like a fairy tale? Or, a Bollywood potboiler perhaps? Well, if Bollywood's top studio Eros International wants to buy the rights to the above story for a movie, they need look no further than their own corner room, at Jyoti Deshpande. Eros International is India's biggest movie production and distribution house with revenues of Rs 1,071.7 crore in 2014/15 and profits of Rs 124 crore, ahead of the likes of Yash Raj Films (revenues Rs 500 crore in 2013/14) and Balaji Telefilms (revenues Rs 210 crore in 2014/15), and the owner is Kishore Lulla, Eros's Chairman. The company makes 65 to 70 movies a year, 20 of them Hindi movies, the rest in regional languages.

As Deshpande watches a teaser of Bajirao Mastani - a period Hindi film starring Ranveer Singh, Deepika Padukone and Priyanka Chopra to be released on December 18 - on the large screen in her office auditorium in Mumbai, one can sense the feeling of ownership in the way she reacts and explains the nuances to everyone. After all, this is a project that she saw from scratch, from the script stage to today, when plans for the movie's promotion are being readied.

That is Deshpande for you - energy, charm, boyish smile and effective. At 45, the daughter of a journalist who worked with Indian Express and Free Press Journal has been with Eros since 1998, and has grown the firm along with Lulla from a mere distributor of Hindi films in international markets, to one that actually produces some of the biggest hits in the film industry today.

This year's biggest hit, Bajrangi Bhaijaan starring Salman Khan, grossed Rs 320 crore in the Indian box office in seven weeks (it's still playing). Tanu Weds Manu Returns, a mid-budget movie starring national award winner Kangana Ranaut, has crossed Rs 150 crore. Other films that got critical attention and high decibels were Badlapur and NH10. "Jyoti is one of the most impactful individuals in our industry today," says Vikram Malhotra, CEO, Abundantia Entertainment and former COO of Viacom18, who has known Desh-pande for quite some time. "She is a perfect blend of an entrepreneur and an executive, which is critical for long term success. Apart from having superb business acumen, she also understands the creative pulse that has enabled the studio to come up with powerful content."

After delivering big successes on the movie front, Deshpande's focus is now on another frontier: digital. "We have invested in every wave of technology," explains Deshpande. "We've done it with VHS, done it with DVDs, done it with TV licensing, now the whole digital opportunity stands before us."

And the lynchpin of that entire strategy is Eros Now, a web portal that dishes out entertainment from latest movies to movie trailers to music videos to music albums to television shows to older movies to regional content movies, music, even entertainment gossip. "Pakistani shows from Hum TV, etc., are the most popular among TV aggregated content," says Deshpande. "But the differentiation will come from our (Eros's) movies and our originals."

Eros is making this content - both its own and licensed from others like Disney and Viacom - free of cost. "We're building a business; in the next three years, we will invest in growing a base of 100 million users (it currently has 26.5 registered users)," says Deshpande. "Then we will work towards converting a large proportion of that user base to sticky, recurring, paying subscribers." She adds that Eros has already spent about $40 million to $50 million in the last two years, and will spend at least $25 million to $30 million every year for the next three years to build Eros Now.

Jyoti is one of the most impactful individuals in our industry today... perfect blend of an entrepreneur and an executive

Converting to paid subscribers is the big 'if'. "If they stop free content totally, it won't work," says Murtuza Kachwala, Managing Director with Protiviti India. "It has to be a mix of free and paid. People can come to the portal for free content, and then find other content that they like which they pay for." Which is precisely the strategy that Eros is going ahead with.

"We think there's a bunch (of subscribers) who will never pay and we will use digital advertising to monetise those audiences," says Deshpande. "Then there will be a bunch who will work on a transactional basis - they will want a day pass, weekend pass or single access." To that end, she is planning to launch packages of Rs 20 for three days and Rs 50 and Rs 100 for the one month premium packages with special features like the ability to watch offline, create a family account, portability across devices etc. These packages will be launched next quarter.

The biggest draw, of course, will be Eros's own movie library of more than 3,000 films, a large chunk of which are big grossers. "Netflix (the $5.5-billion streaming media company) got there by aggregating content and delivering on a streaming platform," says Deshpande. "Today it has begun investing in its own content. For Eros, the starting point is content ownership. We want to give a full breadth of content - movies, music, music videos, television catch-up shows, and we are creating our own original TV shows, which are available in boxes. You can see 13 episodes of a serial over a weekend completely ad free. That's the future." So bullish is Deshpande on Eros Now that she believes in three years, its contribution to Eros's revenues will be 25 per cent, and in five years, 50 per cent.

"They have taken the first-mover advantage," says Protiviti's Kachwala. "But the next big thing is Reliance Jio. Once Jio is live, they will bring in IPTV, movies. Jio's model will make or break other players." Kachwala adds that Eros should tie up with Reliance Jio to get more subscribers.

On the movie front, Deshpande is looking at new growth markets. "We'll look at Indo-China co-productions, Indonesian content, Korean content, not just Indian movies releasing there, but also local collaborations so that our content becomes more salient in those markets and gets a bigger share." Already, Eros is looking at doing projects with a couple of Chinese companies. The logic is simple. A joint production with Chinese movie stars can release in 23,000 screens across China, compared to just 4,500 screens in India. The budgets for such films are higher ($20 million to $25 million, compared to $15 million for a top starrer in Hindi), and so are the potential returns. "In China alone the film can gross more than $100 million, which is more than our worldwide gross today for a single film," says Deshpande.

That's her mantra for growth. Sounds like a fairy tale? Now, where have we heard that before...

(With inputs from Ajita Shashidhar)

I-T sleuths asked to give foreign firms a tax break