Bond Fund With a Difference

Investors are jittery about corporate bonds and debt mutual funds due to huge corporate defaults over the last couple of years. That's understandable.

But what if these risks can be minimised by investing in, say, bonds issued by government companies? Banking and PSU debt funds do that to a large extent but still carry credit risk as they also invest in papers lower than AAA-rated. Some may even have exposure to equities-like risky AT1 bonds such as the ones issued by YES Bank where investors lost all their money.

However, there is one investment that can help you take exposure to a basket of AAA-rated PSUs. Bharat Bond ETF, which tracks the Nifty Bharat Bond Target Maturity Indices, is a low-cost passive debt investment, India's first corporate bond exchange-traded fund (ETF), for up to 20-odd PSUs. The investment can start from as less as Rs 1,000.

Edelweiss AMC, which has a mandate to manage the ETF, launched two variants - Bharat Bond ETF April 2023 and Bharat Bond ETF April 2030 - in December with a maturity of three years and 10 years, respectively. It is set to roll out two more series in July that will mature in April 2025 and April 2031. The offer period is between July 14 and July 17. The fund-raising target is Rs 3,000 crore with a green shoe option of Rs 11,000 crore.

The demand for Bharat Bond ETFs has risen sharply since their launch. Edelweiss AMC, which mobilised over Rs 12,000 crore through ETF during the new fund offer period, has more than doubled the assets under management to over Rs 30,000 crore (ETF and FoF combined). "Much of the growth, especially in the 10-year segment, has happened after March, when the credit crisis deepened. This is encouraging as long-term money is coming in," says Radhika Gupta, CEO, Edelweiss Asset Management.

Most investors like fixed deposits (FDs) due to assurance that they will get their principal back after maturity with interest. Bharat Bond, with its target maturity structure, also offers predictable returns. Target maturity means it invests in bonds whose maturity is the same (as closely as possible) as the maturity of the fund, unlike other funds that may invest in long-term papers but have a short-term maturity or vice versa.

Bharat Bond does not give regular income as the fund house reinvests coupon payments. At maturity, you receive an amount similar to the yield to maturity mentioned during the NFO period. Yields may go up or down during the investment period due to interest rate changes but holding on till maturity will give returns that align with the yield to maturity mentioned in the beginning of the investment.

These ETFs are traded on exchanges, so the units can be sold in the secondary market. Liquidity can be low, but Edelweiss has appointed market makers who provide quotes and liquidity in the absence of other market participants. However, a bulk sale may force you to sell at a discount. In case of FoF, there is an exit load of 0.10 per cent if you withdraw within 30 days of the investment. There is no exit load after 30 days. If you take the FoF route, you can redeem your units any time you want. 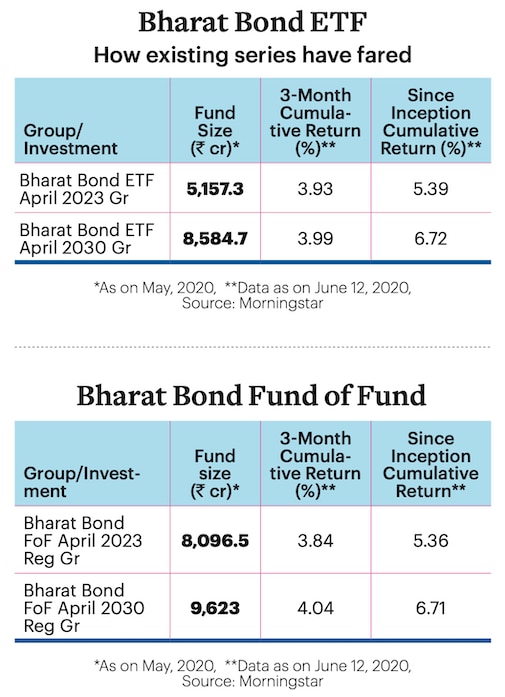 The ETF is taxed like a debt mutual fund. Units held for less than three years attract short-term capital gains tax as per your income tax slab rate. Long-term capital gains after three years are taxed at 20 per cent with indexation benefit. Since fixed deposits are taxed as per your tax slab, people in higher tax bracket may find this investment better than a fixed deposit. "On investing till maturity, post-tax returns from Bharat Bond ETFs can be expected to be higher (due to indexation benefit) than returns from a fixed deposit of the same tenure for investors in higher tax brackets. However, in the interim, Bharat Bond ETFs will be subject to market volatility and interest rate risk," says Himanshu Srivastava, Associate Director and Manager, Research, Morningstar India.

There are two ways to invest in these bonds. One is the demat account. If you don't have one, you can take the FoF route through an asset management company.

Bharat Bond ETFs are market-linked products. They do not offer assured returns, unlike bank fixed deposits, where you are sure that your principal and interest up to Rs 5 lakh is safe even if the bank goes bust. In these unusual times, when the coronavirus crisis has hit business across the board, an AAA-rated PSU may also face repayment challenges. Debt fund expert and former CEO of Essel Mutual Fund Rajiv Shastri says: "If a PSU is downgraded by a ratings agency and the index has to offload it, will there be enough buyers for these downgraded papers? Investing in AAA-rated PSUs is fine, but what happens after borrowing is what matters. What if the government sells a PSU or divests its stake in it?"

Morningstar India's Srivastava says impact of coronavirus on these companies will be much less compared to similar private sector entities or bonds with a lower credit rating. "In case of disinvestment, the issuer will be excluded from the index-effective next rebalancing/reconstitution, once the disinvestment process has been completed. In effect, the fund also has to rebalance the portfolio accordingly. Given that these are liquid entities, rebalancing will not be an issue. But if the issuer is downgraded and is no longer eligible to be part of the index, the demand for its bonds can fall and there can be challenges in liquidating such assets. Given that these are good quality government-backed entities with strong foothold, the chances of them facing such challenges are limited," says Srivastava. The index is reviewed and rebalanced at the end of each quarter. As per the Securities and Exchange Board of India, exposure to a single bond cannot go more than 15 per cent of the assets.

Besides, just like fixed deposits or most other debt instruments, the returns on Bharat Bonds are influenced by the policy rate in the economy. Edelweiss wants to create a ladder of Bond ETFs with different maturities to minimise the interest rate risk.

If your taxable income falls in a lower tax bracket, there are several other options with attractive interest rates that you can consider. However, if you are in a higher income tax bracket and have a long-term horizon, you can consider this as a good option for the debt part of your portfolio. If you are a moderate risk taker and investing with a long-term horizon, Bharat Bonds can provide you FD-like assured returns (if held till maturity), equities-like liquidity and mutual funds-like diversification, especially in the ongoing high credit risk scenario.

"Initially, I did have apprehensions that it may give a rude shock to investors in case of a downgrade. However, PSU bonds are the only trusted investment bonds now. So, it has turned out to be a good investment, especially the 10-year series. I suggest going for April 2031 series since shorter end of the yield curve has rallied too much, so margin of safety lies in longer end of the curve. For a six-year gap, if you are getting 1 per cent higher yield, why not take it," says Shastri.