According to the Insurance Regulatory and Development Authority of India's (IRDAI) annual report 2015/16, the share of life insurance business in India stood at 79 per cent while that of non-life insurance business was at 21 per cent. In the life insurance segment, India ranks 10th among 88 countries, and its share in the global life insurance market was 2.24 per cent in 2015 compared to 2.08 per cent in 2014. The life insurance industry recorded a premium income of Rs 3,66,943 crore during the financial year 2015/16 as against Rs 3,28,102 crore in the previous financial year, registering growth of 11.84 per cent (4.39 per cent growth in the previous year). At the end of March 2016, a total of 54 insurers were operating in India of which 24 were life insurers, 24 are general insurers and five were health insurers, solely operating in the health insurance space. Overall, the industry witnessed a 3.2 per cent growth (against the 36.61 per cent decline in the financial year 2014/15) in the number of new policies issued.

How they were selected

The winners in life, general and health insurance categories were selected based on a wide range of parameters, including customer service and satisfaction, size and scale, business growth, financial strength, prudence and performance in terms of regulatory compliance. The methodology for the three categories was same as last year. This year three new categories were introduced, including term insurance, motor insurance and unit-linked insurance plans.

For the Term Plan of the Year segment, the winner was selected based on claims ratio, new business, persistency, claim settlement turnaround time (average in each quarter, 15 per cent), cost per lakh and product features.

The parameters for Term Insurance Provider of the Year focused on three core areas, namely, business growth, product strength and customer satisfaction. Under business growth, new business growth was included, which gauged how the an insurer performed compared to its competition. 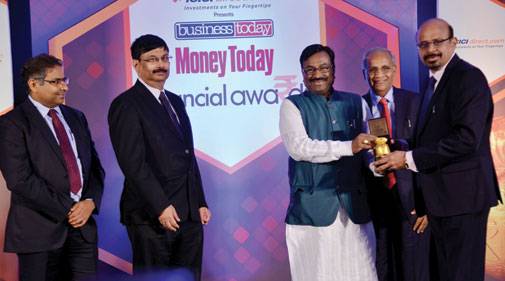 Understably, product strength measures customer satisfaction as this helps determines whether customers will continue to pay premiums after the first year. Settlement turnaround time (TAT) is another parameter that shows percentage of claims settled in each quarter -- again a customer satisfaction indicator that involves the claims management process of an insurer. It pinpoints how efficient they are in settling claims. Similarly, claims ratio is an indicator of an insurer's upfront underwriting process. It spells out how good or bad they are with their underwriting.

The cost-per-lakh parameter was included in the methodology to show how cost effective the term plans were. This is undoubtedly a key factor in a price-conscious market like India.

Product features, including benefit payout options, riders, coverage offered, premium paying term, policy term and in-built features are extremely important and show whether an insurer's product has all the necessary features to cover all customer requirements or not.

For the three-year fund performance, we had taken performance of blue-chip funds or funds investing in large-cap companies so as to have a uniform comparison of how investments in these products had performed over a three-year tenure.

To acknowledge insurers which have grown by ensuring customer satisfaction, we decided to bestow awards in the following six categories. PolicyBazaar is our knowledge partner for the insurance category. Here are the winners. Sudhir Mungantiwar, Cabinet Minister for Finance, Planning and Forests, Government of Maharashtra, and Banks Board Bureau Member A.K. Khandelwal giving the award to G Srinivasan (right), Chairman and Managing Director of The New India Assurance, the Best General Insurer of the Year

The New India Assurance Co. Ltd is a government-owned general insurance company operating in 28 countries with headquarters in Mumbai. Its gross premium increased to Rs 15,149 crore in 2015/16 as against Rs 13,209 crore in 2014/15.

ICICI Prudential Life Insurance Company Ltd is a joint venture between ICICI Bank Ltd and Prudential Corporation Holdings Ltd. Its assets under management (AUM), as on June 30, 2016, stood at Rs 1,092.82 billion. The market share of the company, as in the financial year 2015/16 was 11.3 per cent based on the retail weighted received premium (RWRP).

Bajaj Allianz General Insurance continues to be one of the robust insurers registering a profit after tax of Rs 564 crore as on March 31, 2016. Over the past year the company launched several innovative features, including telematics for car insurance, which makes it stand apart from the competition.

HDFC Life is one of leading long-term life insurance providers in India. The company posted a 23 per cent growth in premium retention, led by 35 per cent reduction in surrenders and withdrawals (based on number of policies). Its new business sum assured increased by 50 per cent in the financial year 2015/16 compared to the previous year. Total premium collected by the company during the year increased by 10 per cent to Rs 16,313 crore from Rs 14,830 crore in the previous year.