Money Today: Does it Make sense to Invest in EVs?

Electric vehicles might be costlier than petrol-based ones; but can they save you money in the long run? We find out...

Noida-based Karan Kumar has a daily commute of over 60 km. The 26-year-old software engineer, who drives his own car, travels to work 30 km away in Delhi and back home. Rising fuel prices and a drop in his car’s efficiency, however, have made his monthly fuel bill go up significantly, burning a hole in his pocket. Kumar is, therefore, considering buying a new car. But he hasn’t been able to decide which type he should buy: a petrol-based one like before or an electric vehicle (EV). “I spend at least Rs 12,000-15,000 every month on fuel alone. Buying an electric car would help reduce this cost, as well as fight the rising pollution in the city. But I am not sure if it will prove to be an economical decision in the long run,” he says.

Kumar is not alone in facing this conundrum. Many like him want to switch to EVs because of the rising fuel costs, but are unclear about an EV’s long-term cost efficiency, given the fact that it is relatively more expensive than a petrol or diesel car.

Does it make financial sense to invest in an EV? We find out…

Globally, EVs represented almost 5 per cent of all new car sales in 2020, increasing by more than 40 per cent over the previous year. In India, however, EV sales accounted for barely 1.3 per cent of total automobile sales during 2020-21. But the market is expected to grow at an estimated CAGR of 90 per cent from 2021 to 2030 and be worth more than $150 billion by 2030, according to a report by RBSA Advisors, a transaction advisory firm. 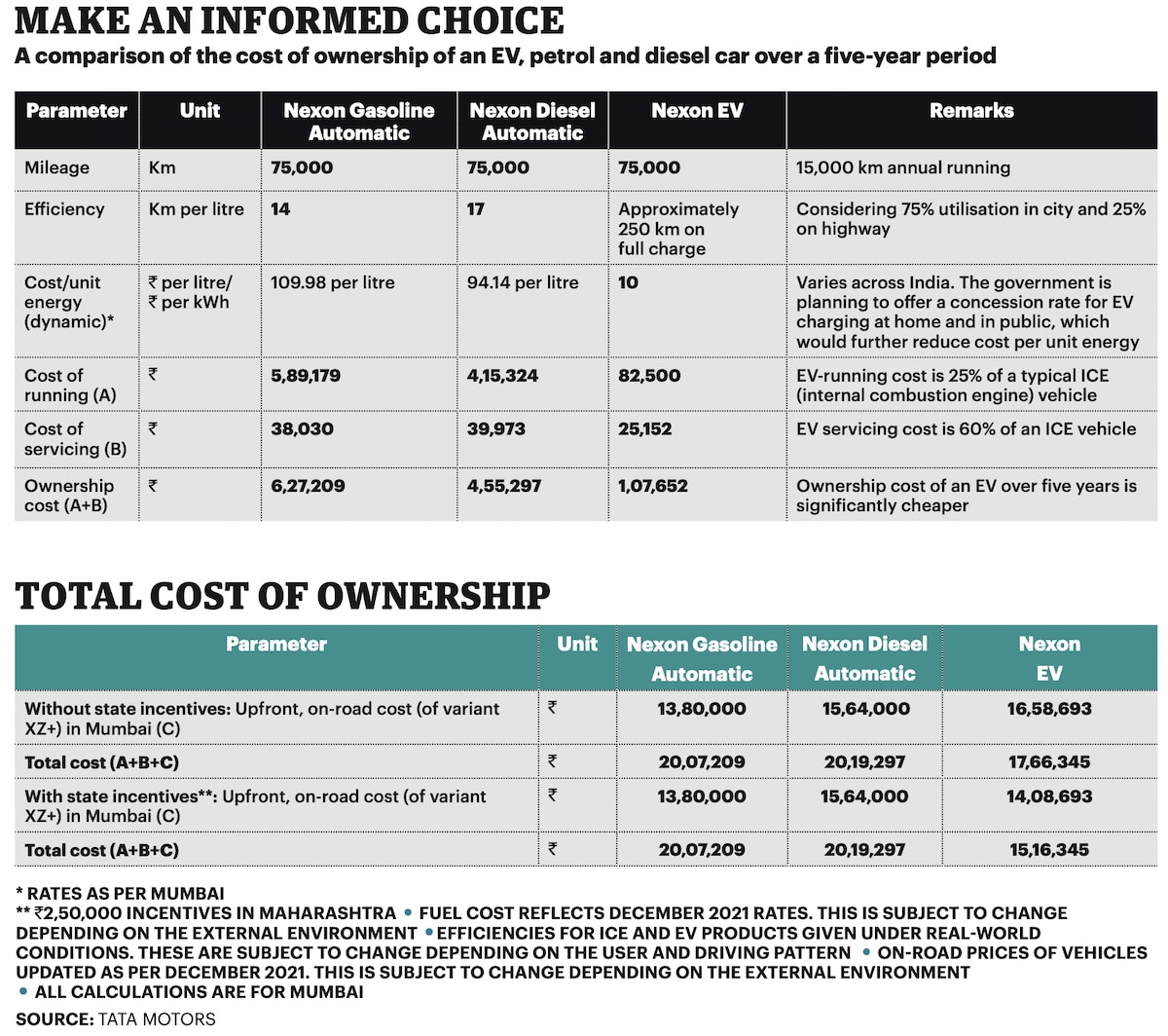 The Indian government is also pushing hard for EVs. Through the Faster Adoption and Manufacturing of Hybrid and Electric Vehicles (FAME) scheme, which entered its second phase in 2019, the government is doling out multiple benefits such as incentives for manufacturers and the establishment of a network of charging stations. With policymakers, as well as the industry coming together, it is just a matter of time before EVs shape the future of mobility in India.

The biggest draw of an EV is the cost of running the vehicle, which is about 20 per cent (or less) of the cost of using a petrol or diesel one. While the average running cost of a petrol-based car is around Rs 8-10 per km, for EVs, this comes down to Rs 1-2 per km.

To put this in perspective, imagine if you are in Mumbai and your annual commute is around 15,000 km. You will end up spending around Rs 5.89 lakh in fuel costs over five years if you are driving, say, the Tata Nexon Gasoline Automatic. The cost of driving the Nexon EV, however, comes down to only about Rs 82,500 during the same period (see Make an informed choice). This, alone, tilts the scale towards electric cars.

Considering that an electric vehicle has fewer working parts—just a couple of dozen, compared with over 20,000 moving parts in an ICE (internal combustion engine) vehicle—the costs of maintenance and repair are also considerably low. In the case of Nexon EV, for instance, the cost of servicing across five years comes to about Rs 25,152, almost 40 per cent cheaper than the maintenance cost of the Nexon Gasoline automatic (Rs 38,030) over the same period.

Then there is the tax incentive. If you take an auto loan till March 31, 2023, for example, you can receive tax deduction of Rs 1.5 lakh under section 80EEB of the Income Tax Act.

But those are just direct taxes. The Central government has also reduced the GST rate on EVs—from 12 per cent to 5 per cent. In some states such as Delhi, Tamil Nadu, etc., EVs are also exempt from road tax and registration costs. The back-of-the-envelope calculation shows that a customer will save more than Rs 2.5 lakh in five years through tax sops and incentives if she buys an EV. If you include incentives provided by various states, this could go as high as Rs 5 lakh in five years.

But before getting carried away by the amount saved on fuel costs, it is important to note here that the acquisition cost of EVs is higher than ICE vehicles. The battery—the lifeblood of EVs and which accounts for about 40-50 per cent of the vehicle’s cost—motor and sensors used in EVs are all costly. “An electric vehicle is costlier than a petrol-based one by around 30-40 per cent. The main component of the electric vehicle is the battery. The additional components required for battery operation are motor, control module, etc. As of now, the production of these vehicles is at a lower volume. Till such time production is increased, costs will remain high. And with an increase in production, the cost will gradually go down,” says Deepak Prasad, Chief Operating Officer, Future Generali India Insurance.

The cost of insurance is also significantly high for EVs. If you are making a choice between the Nexon EV and the Petrol variant, the insurance is around Rs 6,500-7,500 costlier annually for own-damage premium for the EV, he says. Vehicle insurance premium depends on multiple factors such as vehicle ex-showroom price, registration location, cubic capacity and age of vehicle. “Since the battery vehicle cost is 30-40 per cent higher than a petrol-based one, the own-damage premium of the electric vehicle will be higher,” says Prasad.

All things said, it might still be cheaper to drive the EV. “Although the initial purchase price of an EV is Rs 5 lakh higher than a similar petrol/diesel version, the running cost is very low, leading to savings on both fuel and maintenance,” says Mayank Jain, CEO, New Auto Business, CarDekho.

That’s not all. The biggest beneficiary of this mass movement towards EVs could be the environment.

India’s shift to shared, electric and connected mobility in the passenger vehicles segment could help save nearly 1 gigatonne of carbon dioxide emissions by 2030, according to a 2017 FICCI and Rocky Mountain Institute report, titled Enabling India’s Transition to Electric Mobility.

It is important to note here that if the source of energy to charge the battery is not solar or hydel, it beats the purpose and isn’t completely clean, a bone of contention for a lot of green warriors across the world. But if you put that aside and look at the overall impact on the environment, EVs will trump cars with combustible engines every single time.

The biggest impediment in the mass adoption of EVs is the lack of public charging infrastructure. According to the RBSA report, as on October 10, 2021, the Ministry of Heavy Industries (MHI) has sanctioned a total of 3,397 EV charging stations under the FAME scheme. India needs around 4,00,000 charging stations to meet the requirement for two million EVs that could potentially ply its roads by 2026.

To cater to this huge demand, an integrated work approach between the private and public sector is required. Multiple companies have taken a stab at it—Ola’s Nagpur experiment in partnership with Mahindra is a prime example—but so far, the results haven’t been anything to write home about. “EVs take time to charge. Typically at home, only slow charging can happen—a 30-kWh car will take eight-nine hours. Fast-charging option is only possible in dedicated charging stations, which are being envisioned by the government, but there are not enough on the ground yet,” says CarDekho’s Jain. “Lack of public charging infra will restrict freedom of movement. There are not enough stations in the city and further less on the highways. The usage will still remain in-city and not for long distance. This also leads to a lot of users refraining from buying an EV.”

The National Highways Authority of India (NHAI) recently announced that it will add an EV charging station for every 40-60 km of national highways. The plan is to cover 40,000 km of highways by 2023 with these charging stations.

This will tackle range anxiety (the fear of running out of power on a journey), which is the second-biggest issue plaguing the sector. “The other option is battery swapping, which works well for two- and three-wheelers, but for cars, it is difficult basis design of the vehicle,” says Jain.

The availability of parts and the ability to address issues across service stations within the OEM (original equipment manufacturer) network and other multi-brand garages are also big challenges. “Although repair and maintenance of EV powertrain would be lesser than ICE, there is still a lack of education in the industry to address issues if they arise,” says Jain.

There is also no clarity on resale value. The used-EV market is non-existent and will take time to mature. “Ideally, an EV should have a higher resale value, less mechanical wear-and-tear, and batteries can have a second life beyond automotive application,” says Jain.

The first recorded EV was built in 1827 by Anyos Jedlik, who invented an electromagnetic rotating device. Later, between 1832 and 1839, Robert Anderson, a Scot, built a vehicle that ran on batteries. “Despite their initial success, these vehicles slowly started disappearing, as they were suitable for travelling short distances and better innovations in the Internal Combustion Engine (ICE) by 1930, practically vanished them from the road,” says the research report by RBSA Advisors.

This time around, with policymakers and companies coming together, and the climate crisis looming, there is a more concerted effort towards making the EV dream a reality. Will the revolution sustain this time?