Mid-cap and small-cap funds do well in spite of a fall in benchmark indices. This may continue for some more time.

Year 2015 was bad for the stock markets. The Nifty 50 fell 4.8 per cent while the Sensex shrunk 5.06 per cent. However, BSE Mid Cap and BSE Small Cap indices bucked the trend and rose 6.75 per cent and 5.46 per cent, respectively. "It is rare for small-caps and mid-caps to outperform their large-cap peers in a falling market," says Mahesh Patil, Co-Chief Investment Officer, Birla Sun Life AMC.

The reasons for the market's tepid performance were slowdown in global growth, especially China's, government inactivity on the reform front, and reporting of poor earnings by big companies. China was under stress due to falling consumption and rise in production costs because of currency devaluation. "This was a blessing for Indian small-cap and mid-cap companies as companies in sectors such as capital goods, chemicals and textiles increased their exports," says Patil.

On the other end, foreign institutional investors, or FIIs, pressed the panic button due to fear over rate increase in the US and exited emerging markets, which created more pressure on large-caps (where they are usually big investors). "Also, big companies depend on global markets for a higher share of revenue than others. That is why the global uncertainty helped small-cap and mid-cap stocks," says Patil.

This is not a one-off performance. Typically, when an economic recovery starts, as is happening at present, small-cap and mid-cap companies are the first ones to start growing fast. This is because they are nimble and can take advantage of improved economic conditions faster. Their stock also rises much faster due to fewer number of shares in the market (even a small investment can trigger a large move).

Had you invested in the small- and mid-cap story five years ago, you would have made a lot of money. During this period, small-cap and mid-cap funds, on average, returned 19 per cent and 17 per cent, respectively, a year. This means your investment ofRs1 lakh in these two fund categories would have becomeRs2.4 lakh andRs2.2 lakh, respectively. The Sensex returned 7 per cent during the period while large-cap and multi-cap indices rose in the range of 10 per cent.

The performance of some mid-cap funds belies the belief that these are purely cyclical bets. Some have delivered returns in the range of 20 per cent over the past five years (May 2011 to May 2016). The three-year returns are even better (30 per cent).

According to Neelesh Surana, CIO Equities, Mirae Asset Management, markets have rewarded companies that have delivered superior growth in a challenging economic scenario. Mirae Asset Emerging Bluechip Fund has been the best performer in the mid-cap category over the past five years with returns of 23 per cent. Surana attributes this to focused approach and avoiding businesses with weak cash flows such as construction and public sector banks. The fund does not invest in companies that generate less than Rs80-100 crore cash per annum.

Another winner in this space is Birla Sun Life Pure Value Fund, which has outperformed peers except Mirae in three-year returns. Patil says this is because the fund gives importance to stock selection as well as sector allocation while giving maximum weight to sectors where earnings growth is good. "In line with this, we reduced exposure to sectors such as banks and IT (5 per cent) compared to oil & gas and pharma (25 per cent), which helped us deliver better returns," says Patil. The portfolio has exposure to textiles, chemicals and capital goods sectors, which can report good earnings growth over the next two-three years as they benefit from poor Chinese exports. The fund has also increased exposure to domestic-centric sectors such as cement and infrastructure as they are likely to gain from increased government spending on infrastructure and the 7th Pay Commission award that will put more money in hands of government employees. The fund also has exposure to non-banking finance companies, which are expected to benefit from falling interest rates and rise in credit off take. Small-cap funds have done even better. Some have returned over 20 per cent a year in the past five years and over 30 per cent over the past three years. DSP Micro Cap Fund stands out with returns of over 40 per cent in three years. Franklin India Smaller Companies Fund has also been consistently outperforming its benchmark; it returned 35 per cent between May 2013 and May 2016. "We pick stocks of companies that are profitable and sustain earnings growth over long periods, are not asset-intensive, and use capital in a prudent manner while earning an acceptable return on equity," says Janakiraman R, Vice President & Portfolio Manager, Franklin Equity, Franklin Templeton Investments India. The fund follows a rigorous bottoms-up approach (stocks are chosen based on merit and not sectors). Some of its top holdings are Equitas Holdings, Finolex Cables, Yes Bank, Eclerx Services and Fag Bearings. Finolex Cables has risen five-fold (fromRs50) since 2013, while Fag Bearings has risen 2.5-fold. 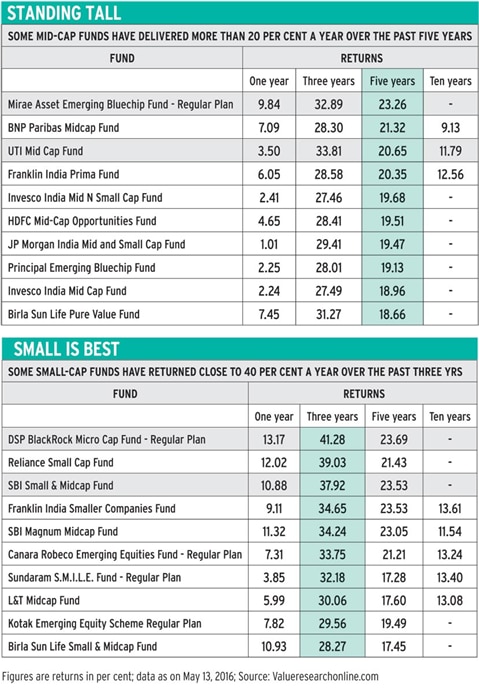 The fund has more than 35 per cent exposure to financial and engineering sectors, followed by services and construction (10 per cent) each. Janakiraman is positive on companies that depend on domestic demand as this reduces portfolio risk to a great degree. The fund had restricted exposure to commodities and stressed sectors. "Consumer discretionary demand has seen growing over the past two years. The viable way to play this is small-cap and mid-cap companies as there are no real large-cap names here," he says. He expects portfolio-level earnings growth of 15 per cent.

Birla's Patil says continuation of slowdown in China, depressed commodity prices and infrastructure development will contribute to growth of these stocks in the next two-three years. This, coupled with fall in interest rates and likelihood of a normal monsoon, will provide impetus to consumption. From a sectoral perspective, Surana is positive on retail banking, consumer goods like autos, durables, consumer staples and building materials. Concerted efforts by the government to revive the investment cycle will eventually lead to growth in corporate earnings, which have been muted for the past two years.

Anil Rego, CEO, Right Horizons, a wealth management firm, says a long-term investor who has high risk appetite can invest 25-30 per cent money in mid-cap and small-cap funds. Even a person with a moderate risk appetite can invest 15-20 per cent if he is investing through the systematic investment plan mode. While choosing a fund, one should consider returns across time horizons in order to see how the fund has fared during different market cycles. Also, look at risk metrics like Standard Deviation and beta. Lastly, invest only if your time frame is three-five years.