To Buy or Not to Buy

For first-time buyers, it is a good time to book their dream home, though prices may fall further from here.

The real estate sector has been going through a sluggish phase for almost five years. Prices may not have corrected drastically but have stayed at more or less the same level over the past two-three years. Experts were predicting a sharp dip due to cash crunch after demonetisation. This has not happened. The latest Budget tries to revive the sector but makes it clear that the government's focus is only affordable housing.

So, what should a home buyer do at this stage? Should he wait for prices to fall further or go ahead and make what will, in all probability, be the biggest purchase of his life?

The real estate sector was sluggish for three-four years due to poor sales. The ban on higher denomination notes worsened the situation as buyers and sellers went into a wait-and-watch mode. This resulted in a 15 per cent drop in sales in the December quarter, as per a report by Liases Foras, a real estate consultancy.

"Quarterly sales had been showing some upside for three-four quarters but demonetisation made both buyers and sellers go on a standstill mode," says Pankaj Kapoor, Managing Director, Liases Foras.

After demonetisation, it was expected that prices will correct by 30-35 per cent, but that has not happened yet. "Price correction will happen when transactions happen. There is a mismatch between expectations of buyers and sellers. Buyers are expecting prices to go down by 30 per cent while sellers are not willing to cut prices by that much. Therefore, there is status quo," says Surabhi Arora, Senior Associate Director, Research, Colliers International. Kapoor expects that the March quarter is likely to be better as the sharp fall in interest rates after demonetisation has made loans cheaper and houses more affordable. In January, many banks, including State Bank of India, cut lending rates by as much as 90 basis points (100 basis points is equal to one per cent). Even while keeping the repo rate steady in the last monetary policy review, the Reserve Bank of India had said that banks still had scope to cut lending rates.

Kapoor says builders are unlikely to reduce prices. But there will be an inflation-adjusted correction as prices remain at the same level for some time. "In the last two-three years, there has been a time correction of 15-20 per cent. With interest rates falling, affordability will rise over time and help the sector," he says. Developers, say experts, are already financially stretched and not in a position to reduce prices.

"Prices have corrected over the past two-three years. There is little scope for a steep correction as margins are already low due to the high cost of land and construction. As real estate is a slightly illiquid asset, investors have a certain holding capacity," says Surabhi Arora of Colliers International.

The inventory of 9.5 lakh units in the top eight cities as on December 2016, as per the data by Liases Foras, will take at least five years to be cleared at the current pace of sales. 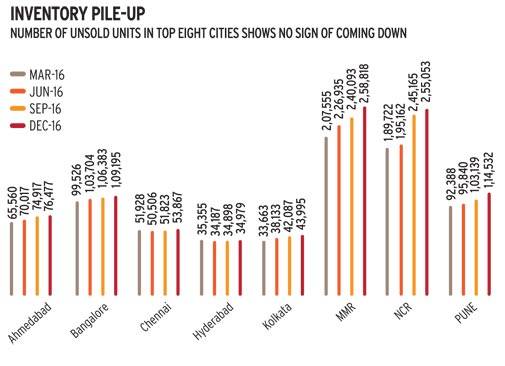 The new Real Estate Regulation Act (RERA) can be a game changer for the real estate sector, notorious for unfair practices. It will give it a much-needed regulator and increase transparency. "RERA will be great for the sector. It will protect home buyers. It will help the sector get an image makeover," says Gaurav Jaggi, Advocate, HKJ & Associates.

Some features of RERA are:

1) Escrow account: The developer will have to transfer 70 per cent money received from home buyers to an escrow account. "This money will be withdrawn as per the stages of construction, approved by engineers and chartered accountants of builders. This will prevent developers from using the money raised for one project for any other project," Narendra Kumar, Advocate on Record, Supreme Court, said at a recent conference on 'Real Estate Sector Post Remonetisation & RERA,' organised by the PHDCCI.

2) Pay for what you get: The buyer will pay only for the carpet area (area within walls). The builder can't charge for the super built-up area, as is the practice at present, where you get 900-1,000 sq. ft. carpet area if you book a 1,300 sq. ft. house (the rest is balconies and common spaces). The new law is expected to stop this practice.

3) Clearances before selling: Developers will be able to sell projects only after the necessary clearances. Under RERA, builders and agents will have to register themselves with the regulator and get all projects with more than eight apartments registered before launch. This will take care of common malpractices such as selling property before getting the necessary clearances. The builder will also have to disclose every detail about the project - number of apartments, carpet area, etc.

4) Five-year warranty: The builder will have to provide for any structural defect in the building for five years. However, the law doesn't define structural defect clearly, which may lead to disputes between builders and home buyers, says Gaurav of HKJ & Associates.

Although RERA is a central law, its implementation will depend on state governments, as real estate is a state subject. The Budget 2017 was a mixed bag for real estate investors. The reduction in the tenure for levy of capital gains tax and change of the base year for indexation from 1984 to 2001 came as good news. However, the reduced limit for "set-off of losses from house property" against any other head of income is a big dampener for investors. Now, in case of a let-out property, a home buyer can set off losses of only up to Rs 2 lakh in a year against any other head of income. Earlier, in case of a let-out property, the home owner was allowed to deduct the entire interest cost from income from house property, which generally resulted in a loss from house property (given the low rental yield), reducing the tax liability substantially. For example, if the interest cost on a let-property was Rs 5 lakh a year, this entire amount used to be deductible, which resulted in a tax saving of Rs 1.5 lakh for those in the 30 per cent tax bracket. Now, the tax saving will be limited to Rs 60,000 (30 per cent of Rs 2 lakh). The advantage that the owner of a let-out property had over the owner of a self-occupied property has now vanished. This will impact those who used to buy a second home for saving tax. If such investors go out of the market, prices may come under further pressure.

The Budget was expected to give some tax incentives to boost the sentiment in the sector. But the government made its intent clear by giving sops only for affordable housing.

Still, there are still several hurdles before houses become affordable for the masses. "One of the major hurdles is high land prices in cities. This will force developers to build such houses in peripheral areas, which will make them unattractive for those who work in cities in the absence of connectivity," says Surabhi Arora of Colliers International.

What should investors do

Like other assets, real estate also goes through cycles. After any downfall, there is a recovery, but nobody knows when it will happen. However, prices are unlikely to rise at the pace they did in the past decade or so.

"I don't see gains for real estate investors for the next two to three years. Since the tax incentive has been reduced substantially in case of let-out properties, it doesn't make sense for a retail investor to invest in property with borrowed capital," says Pankaj Kapoor of Liases Foras.

Investors will have to be more realistic about returns and be willing to hold for the long term. "Real estate is still a good investment provided investors have realistic expectations and can hold for at least five-seven years," says Surabhi Arora of Colliers International.

First-time buyers should look for good bargains given the low interest rate scenario. If they are paying rent, it might be a good time to buy a house. But don't rush as real estate prices are unlikely to go up in the near future.

"For end users, it is the right time to buy. They are in a good position to bargain as developers are under immense pressure to clear inventories. In the primary market, the developers are offering a lot of freebies. In the secondary market, there are deals at 5-6 per cent discount from current market prices," says Surabhi of Colliers International.