Fiscal 2017 has seen a record number of buyback offers from cash-rich Indian businesses. As per the latest estimates by Prime Database, as many as 41 companies announced buybacks amounting to Rs 29,398 crore till February 2017, the highest ever in the history of Indian capital markets (See Record Buybacks). Share buyback is not a recent phenomenon, but as a retail investor, you must have wondered why a company wants to buy back its shares and what you should do to reap maximum benefits. Here is a low-down on buybacks and the ground realities.

In a buyback, a company repurchases its shares from existing shareholders, usually at a premium to the existing market price. This is done either through a traditional open-market purchase or through a tender route. As per the buyback regulations of the Securities and Exchange Board of India (SEBI), both promoters and public shareholders can offer their shares in a tender buyback. On the other hand, only public shareholders can take part in an open-market scheme.

There are other differences as well. For instance, in a tender buyback, a company fixes a price and accepts shares on a proportionate basis directly from shareholders during the buyback period. Under an open-market plan, a company announces a maximum price (but may purchase well below it and will never exceed it) and buys back a certain number of shares (remember, it may not purchase the entire amount announced) from the market within a specific timeframe.

For a company, a buyback typically perks up the return on equity by reducing the equity base, thus leading to long-term increase in shareholder value. Moreover, the market price of its stock usually moves towards the buyback price. In brief, it sets the floor on which the company can trade post buyback.

"One fundamental reason for this is valuation. If a company is commanding a P/E multiple of 10, then, in order to command the same valuation post buyback, the price should automatically adjust upwards to account for its increased earnings per share (EPS) due to the decline in the number of shares," says Pankaj Pandey, Head of Research, ICICI Direct. However, if the buyback is in the form of a quasi-dividend payout where every investor (including promoters) participates, no such rise in stock price is seen. In the past, a large number of public sector undertakings saw a rise in their share prices post buybacks while others did not see any significant change. It all depends on the company's performance and the macroeconomic environment post the buyback (See Past Performance).

While dividends are still going strong, the current wave of buybacks may continue due to its financial impact and tax implications. High-profile stock buybacks may lead to huge growth in corporate earnings as companies reduce the number of shares used to calculate their EPS. More important, India's shifting tax structure subjects short-term captital gains to stiff taxation and hence, this move. Here are three key triggers that lead to share buybacks.

Surplus cash: "Surplus cash with less meaningful deployment options is the prime reason for share buybacks," says Pandey of ICICI Direct. You typically see cash-rich companies returning some cash through buybacks, as they reward shareholders in this manner, besides paying dividends. Wipro, for instance, offered a share buyback in June 2016 at Rs 625 per share, for which the company utilised up to Rs 2,500 crore. The company said the buyback was undertaken to return surplus funds to shareholders, which were over and above its ordinary capital requirements and in excess of any current investment plans.

Undervalued stock: "When a company believes its current share price does not reflect its true value, it can buy back its shares, which increases its EPS and, hence, the share price," says Shrikant Akolkar, senior equity research analyst at Angel Broking. A buyback, in such cases, signals to investors the company's confidence in its business and future value. It also increases the promoters' stake, assuming they did not participate in the buyback.

Tax arbitrage: Buybacks have gathered momentum, especially after the Union Budget 2016/17, when the government imposed an additional 10 per cent tax on dividends for all individual shareholders (including Hindu Undivided Families) and partnership firms (also extended to private trusts in FY18 Budget) whose dividend income exceeds Rs 10 lakh in a financial year. This is over and above the 20.90 per cent Dividend Distribution Tax (DDT) paid by the company concerned, thus making buybacks a tax-efficient choice over dividend payouts.

Should you exit that stock?

Selling shares in a buyback to exit that stock or book some profit needs some careful consideration. As a small retail investor, you can get a tidy sum for your equity shares accepted under the ongoing scheme. Or you may choose to retain your shares and increase your percentage shareholding in the company without any additional investment. But in such cases, the percentage increase in holding may not be significant and the number of shares one owns will remain the same.

"There are two things an investor should keep in mind--one is the buyback price and the other is the acceptance ratio," says Pandey. If the buyback price is at a steep premium to the current prevailing market price (with muted growth prospects, of course), it does make sense to go for it. Most companies tend to offer a premium of 10-15 per cent on the existing market price to make it lucrative for shareholders. Wipro, for instance, offered Rs 625 per share when the stock was trading at Rs 550. Sun Pharma offered Rs 900 a share when its stock was trading at Rs 780.

In many cases, the acceptance ratio also plays a crucial role. Simply put, it is the number of shares offered for buyback/total number of outstanding shares; so, the lower the ratio, the lower the probability of investors' shares being accepted for buybacks. If you hold 100 shares and only five are to be accepted, the effort to tender the shares in a buyback seems futile. Sun Pharmaceuticals offered a handsome price of Rs 900 per share (compared to current Rs 700), but its acceptance ratio was only 3.5 per cent. However, SEBI has now mandated a 15 per cent reservation of buyback offers for retail investors. In order to qualify for the same, your holding must not exceed Rs 2 lakh.

"The winning combination will be a premium buyback price and high acceptance ratio," says Pandey. "But there are times when the premium price is intended to signal a belief that the stock is undervalued and the management will work towards improving shareholder value. If that is the case, long-term investors should stay invested." All these differ from company to company; so do a thorough due diligence before offering your stock.

Tax advantages may also play a key role in your decision-making. As buybacks can be done through share brokers on stock exchanges, these are now subject to Securities Transaction Tax (STT). For listed companies, share buybacks also invite capital gains tax for shareholders. Long-term capital gains from transfer of equity shares (on which STT is paid), which have been held for more than 12 months, are exempt from tax. In contrast, short-term capital gains from transfer of equity shares, which have been held for less than 12 months, are subject to 15 per cent tax plus surcharge and cess. 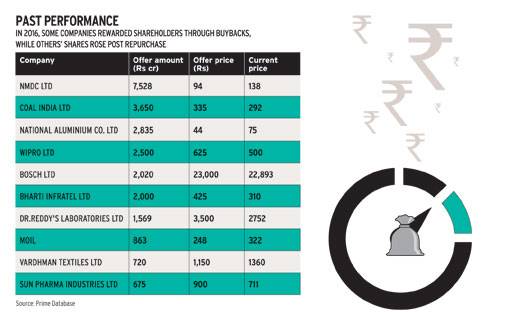 Let us take the case of Tata Consultancy Services (TCS), the country's largest listed company in terms of market capitalisation, to understand the context. The company had a cash pile of nearly Rs 40,000 crore in December 2016, and recently announced one of the biggest buyback offers. It plans to repurchase up to 5.6 crore equity shares at Rs 2,850 per share, which pegs the offer at a mammoth Rs 16,000 crore. The buyback price of Rs 2,850 is a 14 per cent premium to its closing price of Rs 2,500 on the day TCS made the announcement. According to Akolkar of Angel Broking, if shareholders believe that the premium offered is higher and there is lack of visibility on the company's earnings, they should tender their shares if the holding period is more than 12 months. In case they are holding the shares for less than 12 months, it may not be wise to tender shares due to the tax implications, he adds.

"Many a time, companies decide to buy back their shares when they have cash-rich balance sheets, but growth is slowing and there are no reinvestments, mergers or acquisitions," says Akolkar. In such cases, a buyback is a good strategy as it will return the excess cash to shareholders and signal investor friendliness to the market. Also, a large number of IT companies are facing a slowdown due to global macroeconomic issues in general and the protectionist policies of the US, a market that accounts for more than 50 per cent of their revenues. As these companies are now sitting on unproductive cash piles and growth is muted, buybacks can be an ideal way to reward shareholders.

Infosys, too, is seeking shareholder approval for amending its Articles of Association to include provision for buybacks. HCL Technologies board has also approved share buyback worth Rs 3,500 crore. Among non-IT companies, ICRA is offering a buyback at Rs 4,500 per share (See Open Buyback Offers), saying it will not jeopardise future growth opportunities of the company, but will provide an exit opportunity to public shareholders.

All that sounds good, especially when you consider how Berkshire Hathaway Chairman Warren Buffett has constantly supported the desirability of repurchases and said that "from the standpoint of exiting shareholders, repurchases are always a plus." So depending on your tax liablities, shareholding and understanding of the business, it is time to take a good, hard look at your portfolio companies and decide whether buybacks will work for you.