Wagadwala Store is a household name in residential complexes of Marol in suburban Mumbai. Just a call away, the kirana store delivers anything from a loaf of bread and eggs to monthly grocery list at a speed no ecommerce major can match. During the initial days of the lockdown, its owner, Samir Wagadwala, was the messiah of Marol. When most nearby stores downed shutters due to lack of supplies, he went from distributor to distributor to ensure that his store was well-stocked. He also continued home delivery.

Wagadwala has a new feather in his cap, and he can't stop talking about it. His online grocery platform, Wagadwala.com, went live two months ago. It has been taking 25-30 orders per day. "I can see my entire inventory online, and when I run out of certain products, say Ashirvaad atta or Saffola oil, the website alerts me. It also notifies my customer when I get fresh stock. The online solution also has a billing facility," he says.

Wagadwala Store may represent a fraction of the 15 million neighbourhood kirana store network (88 per cent of the $800 billion Indian grocery retail market) which has online presence, but supply and distribution glitches due to the lockdown have compelled a large segment of such stores to look at new revenue streams via digital presence. This includes ordering inventory digitally.

The effort is being enabled by little-known startups from SnapBizz and Store Se to Near.Store, Khatabook and Max Wholesale. SnapBizz, in business for six years, is funded by Ratan Tata and market research firm Nielsen. Ashish Kumar, CEO and Co-Founder, Near.Store, says his company got over 80 calls from kirana store owners in a couple of hours of posting an ad on Instagram. Prem Kumar, Founder and CEO of SnapBizz, says there has been an exponential increase in digital appetite of kirana stores after the lockdown. The 8,000-merchant strong SnapBizz has onboarded an additional 1,800 merchants in the last 45-60 days. "We have achieved more than what we were able to in the last 12-18 months," says Kumar. "Through our platform, their sales have gone up by 40-50 per cent in the last two months. The median basket has gone up from Rs 600 to Rs 900, and they have acquired 18-20 per cent new customers," he says.Ask Radha Kumari, owner of Baideshwara Stores in suburban Bangalore who has been forced to order over 30 per cent of her inventory on digital apps of Metro Cash & Carry and BigBasket. "I had no option but to order through an app during the lockdown, but I am finding it convenient," she says. Kumari has also started taking orders on WhatsApp; she fulfills 20-30 WhatsApp orders a day. 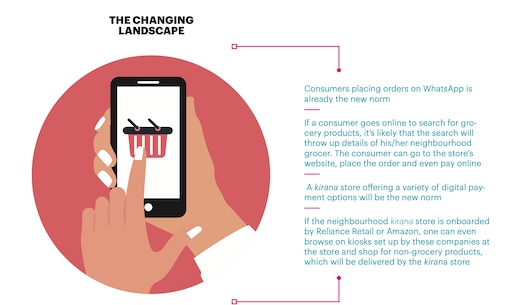 Arvind Mediratta, CEO, Metro Cash & Carry, says the once digital-averse kirana stores are beginning to lap up technology. Metro rolled out its digital app on April 11 and has seen a five-six times increase in online orders from kiranas. "The growth over the last few days has been like a hockey stick. Our call centre helped them download the app and place orders. We also gave them an incentive of 1-1.5 per cent of the value if they ordered on the app."

nboarding a kirana store and giving it a digital facelift is high on the agenda of retail biggies such as Reliance Retail, Amazon and even the country's biggest FMCG major, Hindustan Unilever. Reliance Retail plans to get over five million stores into its fold. The idea is not only to make them last-mile delivery points but also help them manage inventory and billing through its PoS (point of sales) device. In the bargain, the stores will have to order inventory from Reliance. Similarly, Hindustan Unilever has the Suvidha App, through which it encourages retailers to order digitally, while its Humara Store initiative is about helping kirana stores have online presence.

So, why would a consumer go online and order from a kirana store and not from a more professional platform such as Amazon or BigBasket? The reasons are simple. The consumer trusts him. Then there is the speed of delivery by virtue of being present in the vicinity of the consumer. The kirana tech companies want to capitalise on these strengths. On the demand side, a kirana store caters to 1,000-1,500 households in all. It does 200-250 sales in a day. On the supply side, about 100 companies send him goods every week. He also works with 3-10 wholesalers and two-three financial services players. "We are combining both demand and supply sides. On the demand side, we are helping him manage customers, get remote orders through the app and facilitating communication with consumers," says Kumar of SnapBizz. 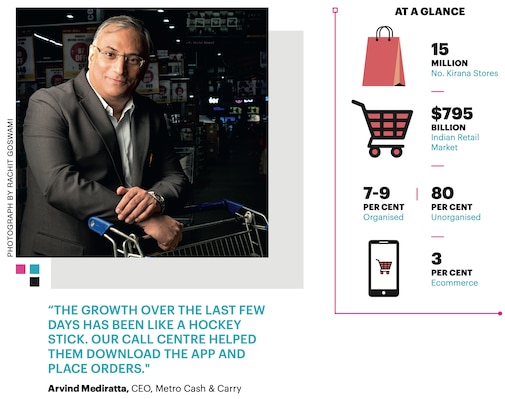 With more and more consumers going for online shopping in the Covid era, the forward-looking kirana stores (1-2 million of the 15 million stores) are eager to have an online presence so that they don't lose customers to online grocers. So, when you happen to search online for a packet of Maggi or Saffola oil, you are likely to see the website of your neighbourhood grocer in search results with a catalogue as professional as that of an established marketplace.

The kirana store owner's new-found digital appetite is a necessity. As recently as January this year, he had no intention of going digital. Wagadwala says the only digital enabler in his store prior to Covid was a PayTM machine.

Therefore, to reach out to an audience that has largely been averse to any digital intervention, the solution providers are trying to make things as simple as possible. Near.Store is giving store owners a dongle at a monthly rental of Rs 300 which they have to plug into their billing machines. "Our dongle uploads all the products they sell to the website we make for them. The website is in their name. If it is Patel Store, the website will say Near.Store/Patel, so that the customer deals directly with the store owner, buys products from him, and also pays him directly," says Kumar of Near.Store. Apart from the Rs 300 a month that Near.Store earns from a store, its main revenue comes from improving the store's performance. "We take a convenience fee (which is 2-3 per cent of the overall bill)," says Kumar.

Similarly, Khatabook is digitising shopkeepers' accounts register. From recording day-to-day cash dealings to keeping track of credit dues, Ravish Naresh, Co-Founder and CEO of Khatabook, says his venture can reduce a shopkeeper's cash problems by almost half. "At the time of billing, the shopkeeper attaches a photo of the bill to the app, and we send messages to his customers reminding them that they need to settle his dues. Cash flow is the biggest pain point for most retailers," says Naresh. Khatabook has added 80 lakh active customers in the first 18 months of its existence. Naresh hopes to touch 20 million in 12 months.

n SnapBizz, the merchant has to download an id, and an automatic link goes to his customers. When the customer clicks on the link, the app is downloaded on her phone, and she can place an order, set delivery time, and pay through the app or opt for cash on delivery. The app also optimises the supply chain by sending alerts to the distributor in case the retailer is likely to run out of a particular product in the next few days.

Online presence helped many kirana stores aggregate orders from particular residential complexes and fulfil them at one go during the lockdown. In fact, a lot of stores also started using WhatsApp. Abhinav Pathak, CEO and Co-Founder, Store Se, says a large part of kirana commerce will move to WhatsApp. He says most kirana store owners are not open to conversations around improving efficiency. "If you give them a proposition through which you can drive footfalls or revenue, they are happy to try it out. WhatsApp is digital, drives revenue and is easy to use. They also don't need to download an additional app. Most kiranas are taking 20-50 orders on WhatsApp per day. They have also started charging people a convenience premium of Rs 15-20. People are happy to pay," says Pathak. StoreSe is working on a model that will enable kirana stores to update their inventory on different platforms, including their own, through WhatsApp. "They chat with our inventory pods and keep updating their inventory," says Pathak.

he Sceptics: Dinesh Patel, who owns a kirana store in suburban Mumbai, has been approached by Reliance Retail several times in the past. Reliance offered to help Patel manage inventory, billing and offered a host of other incentives through its PoS machine. The 60-year-old store owner has been refusing to join. He says he doesn't understand Reliance's way of doing business. "My cousin, who runs a store in Thane, partnered with them and now seems to have been reduced to a delivery boy. His loyal customers place their orders directly on the Reliance app," says Patel.

While coronavirus disruptions forced kirana retailers to rethink plans to partner with the big retailers, a large segment is sceptical that the retail biggies only want to use their customer data and relationships. Abhinay Choudhari, Co-Founder, BigBasket, agrees that the bulk of kirana retailers are sceptical about joining hands with large companies. "Most are scared of the PoS as they believe they won't be able to work with traditional distributors. Even we tried getting into PoS, and quickly realised it's not going to work. We now just have a B2B business, which has grown exponentially during the lockdown."

"On the one hand, many big retailers are telling kiranas that they want to partner with them, while on the other hand, they are competing with them. There is a trust deficit," says Mediratta of Metro.

Though companies such as SnapBizz and others are hoping to onboard 3,000-5000 stores, one needs to remember that these will be restricted to the top 10-15 cities. "To de-risk their supply chain, they will increase their wallet share on platforms such as ours. Till yesterday, if they were buying 10-15 per cent of their inventory (from digital channels), they will increase it to 20-25 per cent," says BigBasket's Choudhari.

Kumar of SnapBizz agrees that the ecosystem will not change dramatically. "The traditional distributors are not going to vanish," he says. "If you take any company which has 400-500 products, only 20 per cent have natural velocity. A Rin soap will find its way to the shop, but who is going to sell the long tail into that store? That's what the distributor does. He goes and sells and cajoles the retailer, gives him longer credit. If you take the distributor out of the system, a company will be selling only 30 per cent of its products. While things will get better and more optimised, I am not a believer that things will be disrupted. Operating efficiencies may get disrupted. For example, today you have 80-90 distributors visiting a shop and booking an order and making deliveries. The deliveries may get consolidated, transportation may get consolidated, but not visits to merchants and servicing of merchants."

The store owners, however, are much more open to digitisation than ever before. They have started leapfrogging from a humble calculator to the cloud.