Xiaomi Mi Pad has a compelling design and hardware that score over the competition. 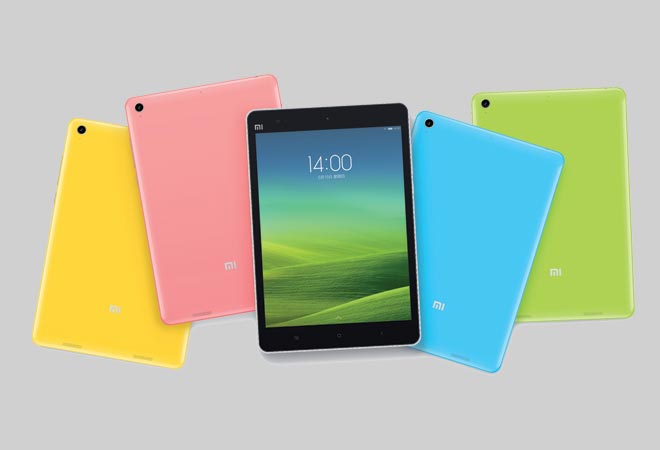 Referred to as the Apple of China, Xiaomi isn't just focusing on smartphone market in India. The company has now launched its tablet, the 7.9-inch Mi Pad. Technically, the Mi Pad was announced in March 2014 and is almost a year old device. Yet, it has a compelling design and hardware that score over the competition.

The Mi Pad looks very much like iPad Mini. It has got a 7.9-inch display with 2048x1536 pixel resolution and 324ppi, just as on the iPad Mini 3. While the screen appeared to be crisp, it wasn't too bright under sunlight. Even the dimensions are somewhat similar with 202x135.4x8.5 mm. It's just that Xiaomi has not been able to maintain the slimness and is 1 mm thick. While iPad Mini has a metal unibody, the Mi Pad has a white plastic rear that resembles the iPhone 5C.

There is a Mi branding on the top left with a 5 MP front facing camera sensor. It has got three capacitive touch keys below the display that illuminate when the display is turned on. With the 3.5 mm port at the top, the volume controls and the power key has been placed on the left panel. As it has a nonremovable back, the memory card slot has been added to the left edge. It weighs 350 grams.

The Mi Pad is better than most tablets in this price range. It is powered by Nvidia Tegra K1 quad core processor clocked at 2.2 GHz and is paired with 2 GB RAM. It runs on Android KitKat operating system and has got a MiUi interface with all the apps scattered across the homescreens. The Mi Pad launched in India comes with 16 GB of onboard storage, of which only 12.87 GB is user accessible. But one can use an expandable memory card of up to 128 GB.

It is Wi-Fi enabled and has got Bluetooth connectivity. The Mi Pad is an impressive performer. Even when loaded with content, the tablet streamed HD videos with ease. The sound output was impressive. There wasn't any lag while playing games either. It can be used as a multimedia device. The multi-tab browsing was smooth. We were able to download apps from the Play Store too. However, I felt a little lag with the MiUi, which you can get rid by installing free thirdparty launchers.

The Mi Pad has got an 8 MP rear camera and a 5 MP front facing camera. The still images captured from the rear camera were bright and offered natural colours. The results are good enough for a tablet camera and will suffice for sharing on social networking sites. The default image editing software onboard was impressive and it saved edited images quickly.

Bag it or junk it: