The GVK Group is taking a host of debt reduction measures even as it tries to look at growth options in the airports business. In the middle of this year, July 7 to be precise, GVK achieved financial closure for the Navi Mumbai airport project. This is the first new venture it is taking up after a gap of three years, the last being its Rs 5,000 crore Goindwal Sahib thermal power project, which went onstream in April 2016.

The apparent reason: The company wanted to focus on debt reduction. "Debt reduction is top priority for us and we are working towards reducing it substantially in the next four to five years," G.V. Krishna Reddy, the Founder and Chairman of the GVK group, had said early in the year. When BT met him a few months ago and asked him the way ahead, he said, "Every day, I spend at least one hour reviewing this (steps to cut down debt)." Senior company executives see no change in this focus even today.

These efforts are driven by an understanding that overleveraging limits options for growth as interest takes away a large chunk of what you earn. There is also the risk of cash flows not being enough to pay interest, increasing the risk of default and now, under the new Insolvency and Bankruptcy Code, bankruptcy as well.

While the debt reduction strategy is clearly working - the total group debt, Rs 30,000 crore two years ago, is now close to Rs 24,000 crore - so is the plan to sell some good assets and get a good number of stalled projects, especially in the power sector, going. But it's not that simple.

The Navi Mumbai airport project, instead of reducing the debt pile, will add another Rs 8,500 crore to it. So, how does this gel with the focus on reducing debt? "There will be ample revenue coming in to take care of this debt because there will be surpluses from this project. It has been evaluated by the bankers and found to be very attractive," says a top company official. Also, the revenue share component for the airport is much less than for other airport projects such as Delhi or Mumbai. Consider this: For GMR's Delhi airport, the revenue share is 46 per cent, which means that for every rupee the airport gets, 46 paise goes to the Airports Authority of India. In GVK's Mumbai airport, this is 38.7 paise, whereas in the Navi Mumbai airport, it is only 12.6 paise. Some within the group like to believe that the financial viability of the project is perhaps why it could achieve financial closure even in the current challenging environment for fund raising. 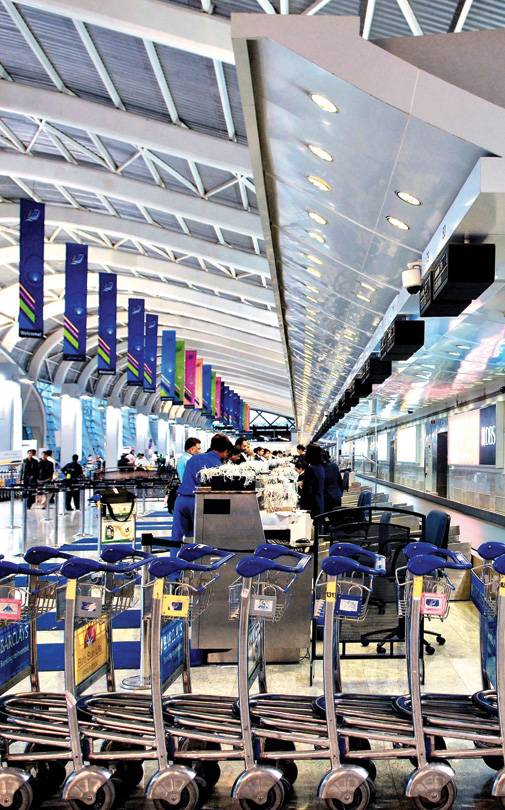 The Mumbai International Airport has to contribute about Rs 2,000 crore equity for the Navi Mumbai airport over the next three-four years

As BT goes to print, the GVK group is in midst of a major debt restructuring exercise, which has two components. One involves plans to convert debt into equity with select banks. Also, negotiations are under way with select private equity investors.

Talks with a senior company official, who is not comfortable being identified, gave some clarity on the two components of the total debt. One is the GVK group debt of about Rs 24,000 crore. The other is around Rs 8,400 crore, or $1.2 billion, taken by a company (GVK Coal Developers Singapore Pte Ltd) based in Singapore which is 90 per cent held by the promoter family and 10 per cent by GVKPIL. Here, most of the debt is to be converted into equity in holding companies for airport and energy businesses. The debt of GVK Coal Developers will fall to as much as one-third to less than Rs 3,000 crore if this, as well as sale of 3,000 acres Special Economic Zone land near Trichy in Tamil Nadu that the GVK group owns, goes through. In all, six banks would convert their debt into equity of airport and energy holding companies. The debt that will get converted into equity is $800-900 million. The equity will be equally divided between GVK's holding companies in airport and energy businesses.

But why is the group involved in this when the company is 90 per cent owned by the promoter family? This is because GVK PIL has given corporate guarantee on the debt. In parallel, the group is talking to six private equity players to raise Rs 5,000 crore in lieu of a stake in GVK Airports Developers, the holding company for the airports business. Here, first, the promoters will reduce stake from the 100 per cent today after the debt-equity swap with banks and then offer a pie to private equity investors. The finer details are still being discussed.

With this, the Rs 24,000 crore debt will fall to Rs 19,000 crore assuming the group is able to raise Rs 5,000 crore from private equity investors by selling a stake in the airports holding company, the most valuable within the group at the moment. GVK is also contemplating an IPO for the airport holding entity. The proceeds will go towards reducing debt.

That's not all. Apart from restructuring and leveraging its strengths to take up measured growth opportunities such as the Navi Mumbai airport, GVK is also in the process of selling some good assets and getting stranded projects off the ground.

The classic case of selling a jewel in the crown is the Bangalore International Airport, GVK's most profitable venture that turned in a profit of Rs 564 crore on a turnover of Rs 1,343 crore in 2016/17. In 2016, GVK sold its 43 per cent stake in the venture for about Rs 3,500 crore.

A somewhat similar strategy worked for the 217-MW Jegurupadu Phase I gas-based power project, one of India's first independent power plants set up in Andhra Pradesh more than 19 years ago. After waiting for years to get the capital cost approved by the regulator, it sold the project to the Andhra Pradesh government for Rs 261 crore. It is looking for a similar buyout for the 228-MW Phase II of the project. It is also mulling divestment of its other gas-based power project, the 469-MW Gautami Power plant, also located in Andhra Pradesh. These gas-based plants have been lying idle over large periods due to non-availability of gas. The stake sale in the Bengaluru airport and sale of Jerugupadu Phase I helped reduced debt by about Rs 5,000 crore.

GVK PIL reported a consolidated net loss of Rs 537 crore for year ended March 2018 due to losses from all the four power projects - Jegurupadu, Gautami, the 540 MWcoal-fired Goindwal Sahib plant in Punjab and the 330-MW Alakananda hydro power project in Uttarakhand. But the latter two have now been revived after long shutdowns. Alakananda was shut down after floods in Uttarakhand. GVK approached banks and proposed debt restructuring. The bankers opted for the 5x25 scheme, which meant extension of the debt repayment period from 10 years to 25 years. This has helped the company start all four turbines.

Once the plant stabilises, it could get additional equity and also raise some funds from banks. The company is in the process of getting refinancing for Phase II of the project. Since it was a green energy project, the company reached out to multilateral agencies and banks with green funds to get a lower interest rate of 7-8 per cent as against the 12-3 per cent that is usually charged for rupee loans. It has signed a power purchase agreement, or PPA, with the Uttar Pradesh Power Corporation under which its costs will be reimbursed after the Uttar Pradesh Electricity Regulatory Commission approves the capital cost. This will substantially reduce the risk of the project.

A similar exercise was undertaken for the company's 540 MW coal-based plant in Goindwal Sahib, which was shut down for almost 18 months after the Supreme Court cancelled coal block allotments. Its two turbines are now running.

With a palpable sense of hope on the road, or shall we say, the tarmac ahead, Krishna Reddy had told BT: "After the debt is reduced, we would be open to looking at taking up new projects, mostly in the aviation sector, where we have the expertise."