Asia's oldest stock market Sensex too has taken a giant leap during the post-liberalisation era with the number of companies listed on BSE doubling to 5,835 from just 2,556, 25 years back. Twenty five years since liberalisation and India has now become a $2 trillion economy from a meagre $275 billion in 1991, unbelievable for a country, which had to once resort to International Monetary Fund to cover huge pile of balance of payments debts as it barely had finances left to fund worth three weeks of imports.

Asia's oldest stock market Sensex too has taken a giant leap during the post-liberalisation era with the number of companies listed on BSE doubling to 5,835 from just 2,556, 25 years back.

From Harshad Mehta scam of 1992 to Ketan Parikh scam of 2001, followed by corporate scam of 2009 of Ramalinga Raju (Satyam scam), the market has seen it all.

The market has also seen stock market regulator Sebi bringing in more retail investors to the equities by filling in loopholes and making investment in stocks investor-friendly.

We bring out some interesting facts to showcase some of the changes the domestic market witnessed during these 25 years.

If you had invested Rs 50,000 in the market post liberalisation, you would have seen a whopping 1771 per cent jump in your investment to Rs 8.5 crore. In terms of compound annual growth rate (CAGR), the investment could have surged by 12.43 per cent. Number of companies listed in 1991 and now

Tidbits: Do you know companies like Zenith, Philips, Premier Auto and Arvind Mills etc once were one of the constituents of BSE Sensex? Yes, they really were! 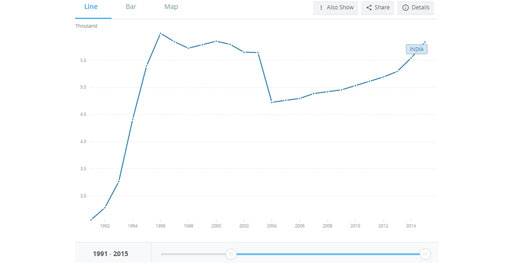 Globally, the country stands at 9th position in terms of market capitalization of listed companies.  US tops the chart, followed by China and Japan. FII flows in financial year 1992-93 were mere Rs 13 crore. There were at least four financial years in the last 25 years when FIIs pumped over Rs 1 lakh crore in domestic equities.

In the Capital Market segment, NSE was ranked fourth in the world based on the number of trades during the calendar year 2014.

Sebi introduced many reforms in the last 25 years. The major among them was the requirement to maintain a minimum public shareholding of 25 per cent for private and 10 per cent for state-run companies. In 2014, PSUs too were asked to maintain a minimum public holding of 25 per cent. This paved way for more public participation in an otherwise highly promoter-led companies.