Here's a look at live updates of the market action today.

Here's a look at live updates of the market action today.

Digital payments company PhonePe announced that it will launch UPI SIP for investment in gold. Users will be able to invest in high purity 24K gold of a specified amount every month. The gold can be accumulated in their insured bank-grade lockers, maintained by MMTC-PAMP and SafeGold.

The UPI makes it convenient for users to start a gold SIP. All the user has to do is select the gold provider, mention the monthly investment amount, and authenticate with the UPI PIN. READ MORE

Homegrown pharma firm Natco on Wednesday said Johnson & Johnson and Momenta Pharmaceuticals have filed a patent infringement lawsuit against the company its marketing partner Mylan Pharmaceuticals Inc. (Mylan) and in the US.

Shares of Indian IT companies have emerged among the major sectoral losers this year. The Russia-Ukraine war, negative sentiment around the Q4 earnings season and continuous selling by FIIs has strengthened the grip of bears in the Indian market.

Delhivery stock trading 4.14 percent lower at Rs 515 against the previous close of Rs 537.25. On Tuesday, the stock made a tepid market debut rising 1.23 per cent higher to the IPO price. The stock listed at Rs 493 on BSE against the IPO issue price. The company offered its shares in a price band of Rs 462 to Rs 487.

10:36 am: Balrampur Chini stock falls over 3% amid marginal rise in Q4 profit

Shares of Balrampur Chini Mills fell over 3 per cent in early trade today after the firm reported a marginal rise in Q4 profit for the quarter ended March 2022.  The fall in the stock comes at a time when the government has imposed restrictions on sugar exports from June 1 to maintain domestic availability and price stability.

On Tuesday too, the stock ended 5.68 percent lower at Rs 389.1 against the previous close of Rs 412.55 on BSE amid reports of the likely ban on export of sugar. Stock of Balrampur Chini Mills fell 3.38 percent to an intraday low of Rs 376 on BSE.

Dr. VK Vijayakumar, Chief Investment Strategist at Geojit Financial Services said, "The dominant trend impacting the market is the relentless selling by FPIs which, as on May 25, has touched Rs 168421 cr for CY 2022. So long as this massive selling continues, the market will remain weak. Another major trend in the market is the shift from growth to value. Value buying happening in segments like banking, in spite of FPI selling, is imparting resilience to such segments.

The government's initiatives to rein in inflation indicate margin compression for segments like sugar, edible oil and metals. But firms with pricing power can weather this storm.

The decline in the dollar index and the US 10-year bond yield is a near-term positive for emerging markets but that will be insufficient to improve market sentiments which are weak." 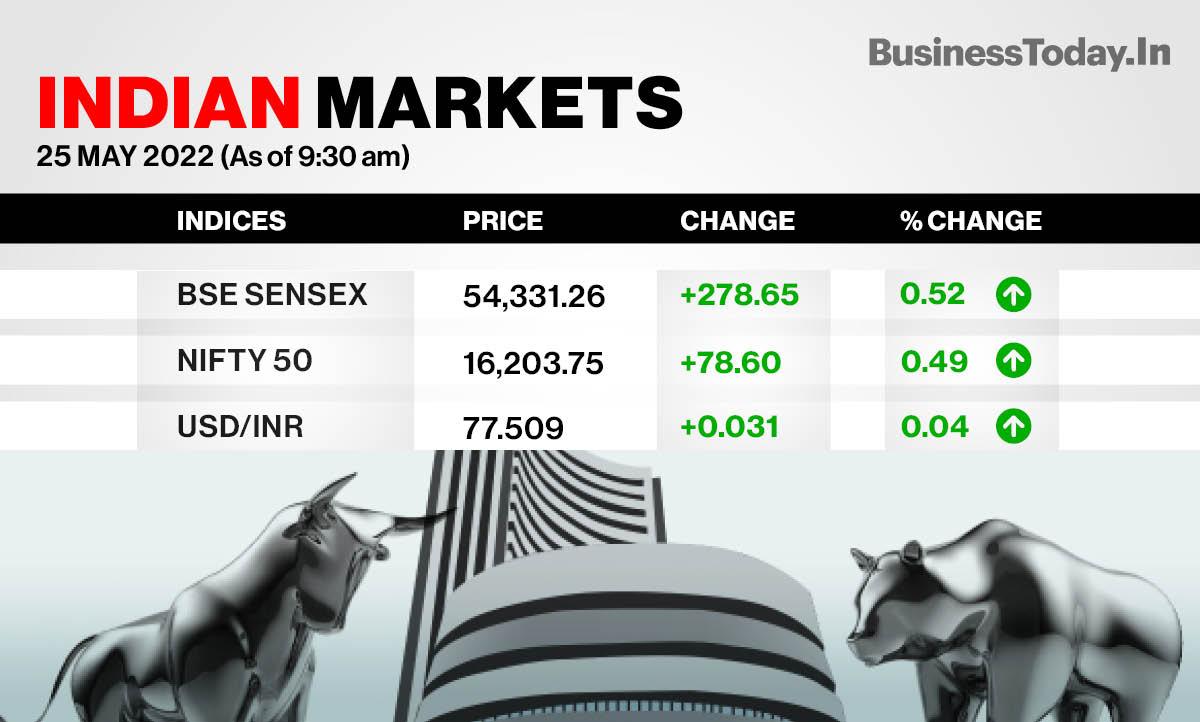 Mohit Nigam, Head - PMS, Hem Securities said, "According to the SGX Nifty and Global Trend, the Indian market will open higher. The US stock market traded lower. The Nasdaq fell 2.35 percent on additional pressure in technology stocks following a poor outlook from social media platform Snap which sent shares down as much as 40%, putting the company on track for its worst one-day plunge on record. Global equity markets have been turbulent as investors analyse the future for monetary policy, inflation, and the impact of China's tough capital controls. Investor sentiment is unstable, with foreign institutional investors pulling out of Indian shares due to a global collapse, rising inflation, and impending central bank tightening. In these situations, investors should exercise caution and take advantage of any declines in fundamentally sound companies. Immediate support and resistance for Nifty are 16,000 and 16,400 respectively. Immediate support and resistance for Bank Nifty are 34000 and 35,000 respectively."

Prashanth Tapse, Vice President (Research), Mehta Equities said, "Despite a sharp fall in the overnight US markets, Asian indices are exhibiting a mixed trend in today's early trade indicating that local markets are likely to remain fragile and volatile on backdrop of growth and inflation bets that continue to dominate investors' sentiment negatively. All eyes will be on the FOMC minutes later on Wednesday which would give clarity on the Fed's rate-hike path in the near term. Also, selling by the FII camp continues to be the biggest negative catalyst for Dalal Street. FIIs have sold shares worth Rs. 48,000 crore in May and most importantly, have pulled out to the tune of Rs 215,000 crore from the Indian market in the first five months of 2022." 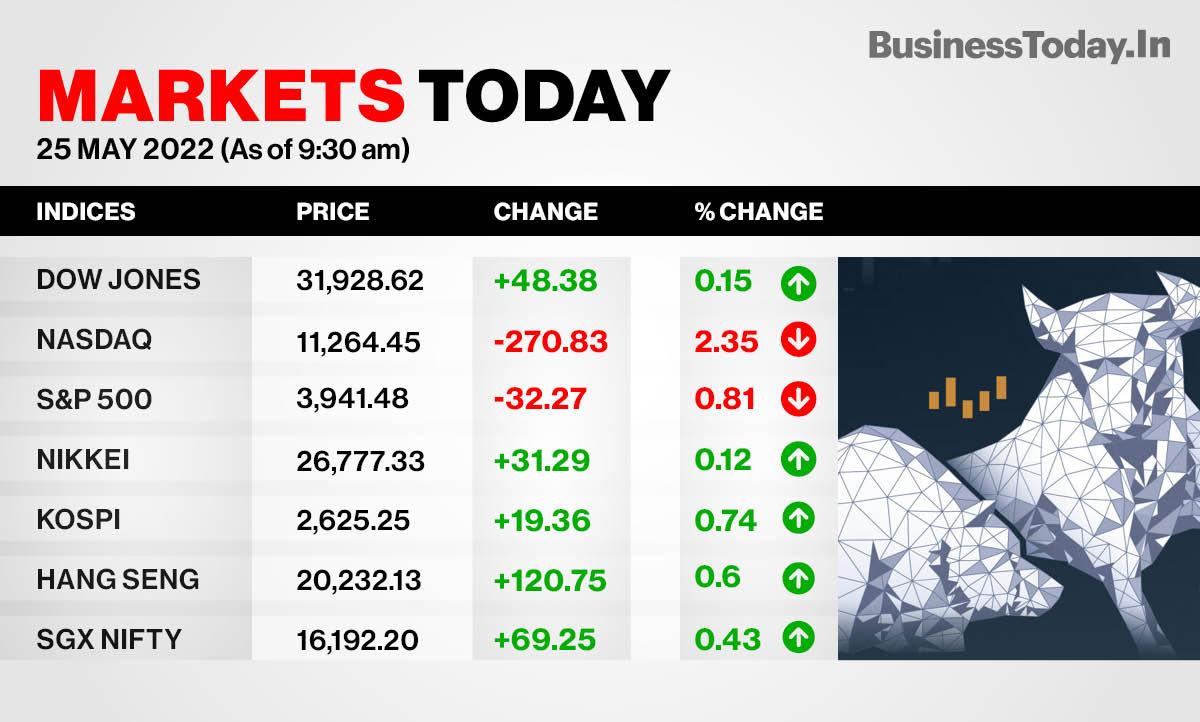 MSCI's broadest index of Asia-Pacific shares outside Japan rose 0.35%, Australian shares were up 0.33%, and Seoul and Taiwan both ticked upwards 0.61% and 0.2%.

8:35 am: Here's what to expect on Dalal Street today

Prashanth Tapse, Vice President (Research), Mehta Equities said, "Amid volatility, Nifty ended on a negative note, with India VIX flaring up 9.83% to 25.70 levels. Sectorally, Nifty Pharma and Nifty IT index dropped around 1.5 per cent each ahead of a speech by Fed Chair Jerome Powell scheduled for Tuesday." Read More

The Indian market is likely to open higher today as SGX Nifty rose 37 points to 16,151. The Singapore Stock Exchange is considered to be the first indication of the opening of the Indian market.