India in particular appears better placed than most to weather future bouts of Fed-related market turbulence.

In our frequent visits to India, it is clear that many local investors tend to worry a lot about the scale of FII inflows, which appear to be regarded mainly as a source of vulnerability and never a blessing. It is seen at best as a double-edged sword. If the Indian economy starts to underperform, then Indian investors fear a big surge in outflows. Conversely, if the economy is doing well, local investors doubt whether a positive FII inflow trend can be sustained.

We do not wish to play down or minimise the potential volatility of portfolio flows and the problems that this can cause for investors, governments and business (the IMF referred recently to capital flows as being "fickle everywhere, every time"). History, however, seems to show that India is blessed with a greater degree of persistence than the average emerging market (EM) when it comes to portfolio inflows. During the market 'taper tantrums' last year and in the more recent October correction, India suffered outflows along with other EM equity and debt markets. But recovery in portfolio flows after each disruption has tended to come sooner and more convincingly in India's case than for other emerging markets. In the latest EM correction, for example, net equity flows to India had returned to positive by late-October, with nearly $14 bn YTD versus $20 bn for the whole of 2013. Unusually, FII debt inflows YTD at $24bn have exceeded equity inflows by a wide margin, reflecting very attractive yields for international investors seeking income in a low global rate environment.

A combination of 'push' and 'pull'

Indian investors should keep in mind that FII portfolio flows in practice always reflect a combination of both external (or 'push') factors, like US interest rates, or global risk appetite, and domestic (or 'pull') factors, like domestic GDP growth, or corporate profits etc.

So while a gradual rise in Fed funds rate in 2015 will be a 'negative' push factor for FII portfolio flows to India, it is unlikely to outweigh a combination of favorable 'pull' factors, notably a strong, stable government, a macro-economy that has bottomed out and begun to recover, relative stability on the external front and domestic investors who are clearly warming towards their own equity market for the first time since FY09. Some EMs more at risk of outflows

We do not mean to imply that there is no risk to inflows to India or EMs generally from the Fed's monetary tightening in 2015, especially if stronger US economic data in the next three or four months looks to be leading the Fed to an earlier first rate hike and a subsequent upward path in rates that is steeper than the gentle climb currently factored into futures markets.

But in our view not all EMs face equal risks in this respect. India in particular appears better placed than most to weather future bouts of Fed-related market turbulence. Since the 'taper fears' last summer some EMs have made efforts to strengthen their macro economies and reduce external balances, efforts that have been reflected in a drop in their current account deficit (ex-China) from 3% of GDP to around 1% now.

Of those economies that have made significant improvements to macro imbalances, none in our view has made better progress than India. Should severe market tremors due to Fed tightening worries return next year, then India will inevitably feel some of the fall-out. However, we doubt very much that the country will be at the epicenter of international investors' EM concerns as it was last year. 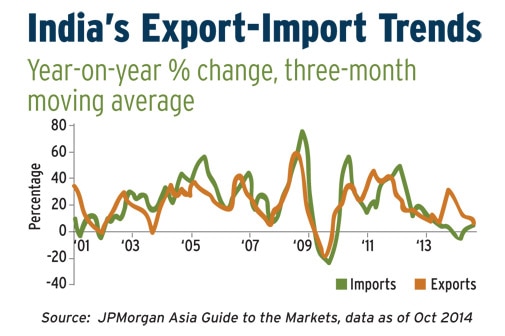 What if the dollar strengthens?

It has to be admitted that the trend towards a stronger US dollar has in the past proved a headwind for EM equities, which has only managed to outperform the global benchmark on about 33% of occasions in a rising dollar environment. A weaker local currency will add to inflation pressures, may increase energy subsidies and may also put upward pressure on local interest rates.

But in India's case, the external financing need is now quite modest and should not prove that difficult to finance, while domestic inflation is clearly on a downward trend. And although the RBI appears to be in no hurry to move on interest rates, the next move is clearly down, not up. So in the Indian Rupee's case, there is perhaps less to fear from a rising dollar in coming months than is the case for some other EM currencies.

A gradually rising dollar is unlikely to prompt a mass exodus of FII flows, especially from countries like India that currently possess good fundamentals and a strong secular domestic growth story. As long as the Indian economy remains on a cyclical recovery track and the government persists with its reform agenda, we believe the start of US interest rate normalisation by the Fed in 2015 poses only a limited threat to India's capital account.

"Turning to nature for inspiration can get you out of conventional thinking".

India should continue to attract a significant share of EM capital inflows in 2015, both FDI (foreign direct investment) and portfolio inflows, although the global total may well be moderately lower compared to this year as a result of gradually rising US interest rates.