'Food inflation may not rise even if monsoon fails to deliver'

Food inflation has been higher than non-food inflation for several years leading to a wedge between CPI and WPI inflation.

About half of the CPI basket is food and about forty percent is non-food, non-fuel or core inflation. These components account for 90 percent of inflation. In the course of two articles we look at what we can expect from food and core inflation as these would be critical to the trajectory of monetary policy and interest rates.

The substantial increase in price of food articles has been a key driver of inflation in recent years. Food inflation also partly explains why there has been a large difference in WPI and CPI inflation. Food accounts for nearly half of the CPI basket while being under a quarter of the WPI (including manufactured food products). Food inflation has been higher than non-food inflation for several years leading to a wedge between CPI and WPI inflation. Since mid 2012 core inflation has remained about 8 per cent while food inflation has ranged between 10 and 14 per cent. In view of the possible "El Nino" this year, there is the fear of a poor monsoon further pushing up food prices.

Food inflation has been traditionally ignored for monetary policy as it is perceived to be a volatile component that is subject to unpredictable weather patterns. However when it is half of the consumption basket and persists over time irrespective of good and bad monsoons, we must look at the key driver of food inflation and try to anticipate its trend.

Major crops in India are subject to a regime of Minimum Support Prices (MSP) that is designed to provide farmers with a remunerative price in case of a sharp fall in open market price of their produce. The past several years have seen substantial increases in MSP of major crops that have fuelled food inflation. In turn food inflation affects CPI for agricultural labourers and pushes up costs - leading to a vicious cycle of cost-price inflation. Some analysts have attributed the increased cost to the National Rural Employment Guarantee Scheme (NREGS) whose wages are linked to CPI inflation. MSP is set based on an analysis of costs by the Commission on Agricultural Costs and Prices (CACP).

The impact of MSP increase on food inflation can be seen in the accompanying chart. MSP increases are announced for a crop year that starts with the Kharif crop (rain-fed, sown around the time of the monsoon) and ends with the Rabi crop (irrigated, winter crop). Given the cycle of crop harvesting and reaching the market, changes in MSP in one year reflect in food prices in the following year as the harvest of the Kharif crop starts in the fourth quarter of the calendar year. 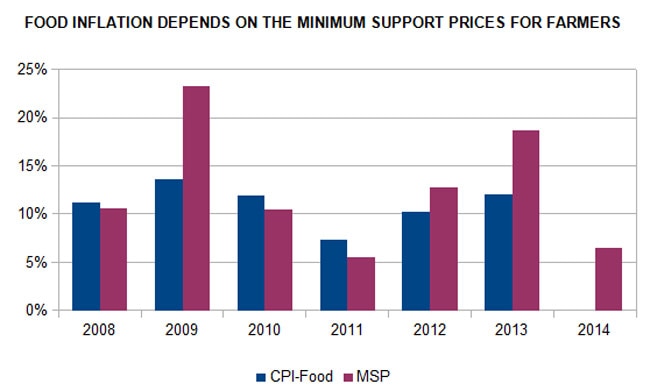 The chart shows the average annual increase in MSP of major crops with increases in CPI-Food in the following year. [CPI (food component) under the new series since 2012 and for Industrial Workers for older periods. Weighted average MSP increases are calculated using the crop weights assigned in WPI. Individual crop weights are not available for CPI.]

As may be seen there is a strong correlation between CPI-Food and MSP increases. It is instructive to note that following the bad monsoon of 2009, food inflation actually decreased as the MSP increases were lower that year. This shows that the dominant factor for food inflation is not the pattern of monsoon, rather it is the cost-push of MSP increases.

For 2014 this portends good news. Last year saw weighted average MSP increase of only 6.5 per cent, the lowest since crop year 2010-11. This compares to an 18.7 per cent increase in the previous year. Thus we may expect that food inflation in 2014 would be much lower than in 2013. Indeed the start of the year has been good as food inflation has declined to 9 per cent from a peak of over 14 per cent last year.

Meanwhile RBI has shifted to using CPI as the benchmark for monetary policy since September 2013. We have looked at the main factors driving food inflation in the CPI. Now we look at core inflation (non-food, non-fuel), which accounts for about forty percent of the CPI basket. Along with food inflation (close to half of the CPI) this accounts for nearly the whole of inflation basket.

Unlike food inflation which has been high and volatile, core inflation has persisted close to the 8 percent mark for a while. The year-on-year stability masks monthly movements which have been correlated with the currency. Weak currency has been associated with rising core inflation while strong currency periods have seen core inflation subside. In this analysis we have used a process of seasonal adjustment to arrive at the  monthly annualized rate of inflation (SAAR - seasonally adjusted annual rate). Especially in the summer of 2013 (May to August) we saw a sustained a sharp fall of the rupee. The following period from June to September saw core CPI accelerate sharply. During these four months annualized core CPI rose to 9.6 per cent compared to an average of 7 per cent in the five months since, when the rupee has shown a stable to appreciating trend. While the currency remains stable - supported by lower current account deficits and higher foreign exchange reserves of the RBI - we should expect to see core inflation to remain on a softer trend.

While the currency impact would affect several goods and services that are traded, a large component of core inflation is housing. Housing accounts for nearly a quarter of core CPI and a tenth of overall CPI. In the CPI calculation housing inflation is measured in a roundabout way. Firstly the index measures house rents rather than house prices. While the actual share of house rents in rural and urban India was found to be only 0.5 per cent and 6.2 per cent respectively (NSSO 68th round) the CPI uses weights of 0 per cent and 22.5 per cent for rural and urban respectively leading to a combined weight of 9.8 per cent. The explanation for this increase is to attribute an "owner's equivalent rent" to owners of houses (who are not renters). This leads to a much higher weight for house rents than is actually incurred.

A compounding flaw is that instead of surveying rents, house rent allowance changes are used to calculate rent changes. That is to say, if an employee's HRA increases that increase is applied to CPI even if the actual rent paid does not increase. Since wages and HRA (in the public sector at least) are linked to CPI inflation, one year's high CPI inflation leads to next year's high core inflation. To reduce core inflation we need to see headline CPI inflation fall.

The sustained high level of CPI inflation over the past five to six years has led many to believe that inflation is entrenched at high levels. However there is reason to expect inflation to soften in the coming months. Food inflation is driven by increases in minimum support prices more than the pattern of monsoon.

Thus the low MSP increase for crop year 2013/14 gives hope to a fall in food inflation this year. In the coming months we will watch the new government's stance on MSP which would go a long way towards determining the inflation rate for 2015. Core inflation on the other hand is driven more by currency and housing. The strength that the rupee has shown since September - and indeed since the US Fed announced tapering in December could lead to a moderation of core inflation in the next several months.

The RBI has been wise therefore to set itself a two year time frame to contain inflation below 6 per cent. In the current year low food inflation should ensure that its target of 8 per cent by January 2015 will be met. If RBI meets its 2015 target the markets and the economy at large will begin to accept a lower inflation regime (inflation expectations would be reduced). This is the channel through which RBI can contain long term inflation.

From the above it would appear that we are at an inflection point for inflation and the trajectory for the coming year is for lower inflation.

Thus we should expect RBI to hold rates in the near term, while it is possible that they could start reducing rates over the next 6 to 8 quarters as inflation remains below the indicated trajectory. Investors with an investment horizon of 12-18 months or longer should look to invest in long duration income and dynamic bond funds. In the very near term (3-6 months), it is possible that market volatility could be high. Investors with an investment horizon of 3-6 months should look to short term funds as these funds are much less volatile than long bond funds.

The author is Head, Fixed Income at Axis Mutual Fund.