Today, it seems critical enough for the success of any business. It also underlines a sense of aggression in the approach, tending towards ruthlessness. It defines success as a dramatic increase in revenues / profits or a big jump in valuation of a business.

When talking about disruptive innovation, one thing that can't be ignored is technological disruption. Technological changes are happening so fast that laws are being left behind. The definition of values in the society is changing. What is ethical on paper in law is being rewritten by technology. However, there is a wide gap between the two and this is causing the present-day dilemma.

Let us take a recent example of a huge success icon - Uber. Considered to be a highly aggressive company beating its rival Lyft hands down, Uber managed to identify a gap in its consumers' lives. The services it provided, revolutionized the cab hailing industry across the world. Started in 2009, Uber managed to gain a strong foothold in the industry, within a very short span of time by making it extremely easy and cost-effective for users to book a cab. Consumers loved this on-demand transportation service.

And in under eight years, the company achieved a valuation of about $70 billion, while expanding its services to about 76 countries.

To be sure, Uber is one of the best examples of an utterly successful company. This success is coupled with ruthless aggression. In its efforts to grow and succeed, Uber has ended up undermining a few of Silicon Valley's established credos.

Uber probably hasn't left any stone unturned when it came to growth and expansion. From helicopter rides to puppies on demands, the company tried out the flashiest of services.
While Uber became the icon of traditional definition of success, it also invited criticism on a number of issues.

Work culture is the backbone of every company. It makes work a pleasure and attracts the best talent. Uber seems to have miserably failed here. Chinks in its armor came to fore when Susan Fowler, a an engineering grad and ex-employee of Uber came out with a long blog post about sexual harassment and gender discrimination rampant at the company. Last year, Uber was made to pay up to $100 million in a pair of class-action law suits filed by Uber driver-contractors in California and Massachusetts.

The penny dropped and ever since there have been a string of investigations leading to a serious public relation disaster, including the rolling of several senior heads at Uber. To add to this chaos, Travis Kalanick, the CEO of Uber announced leave of absence in June, this year. Rumors are abuzz that he might have to take a diminished role when he returns.

Disruptive technology no doubt brings chaotic change in its wake. Changes that are often difficult to immediately adapt to. Because the ground these net entrepreneurs are treading on is new, norms have to be set in place and protocols established.  Sometimes, the disruption outpaces the law. When that happens, it's often difficult to fathom the full ramifications of such a disruptive movement on the architecture of the new economy.

With courage, aggression and toughness, companies like Uber press ahead to create a dangerous and unpredictable future for businesses. They are often not even aware of the way in which they are changing the value systems of other start-ups, stakeholders, consumers, vendors and employees. As role models they have a responsibility towards keeping up these values; but in their hurry to top the growth charts, they waive aside this responsibility. 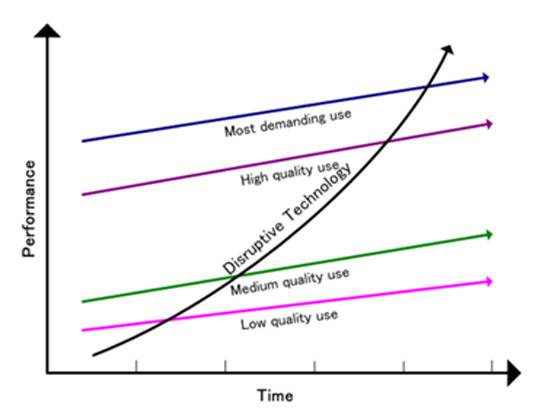 The face of this disruptive world may be a dog-eat-dog, brashly aggressive world, where absolute power corrupts, absolutely. The only way to avoid this chaos is to change the concept of disruptive innovation to responsible innovation.

It's time, these extra-ordinary entities started thinking about the way in which their disruptive innovation is changing the face of the society.

It is time, they understood their responsibility and take full charge of the outcomes.
We have to change the definition of a successful, responsible company. Both direct and indirect stakeholders' delight to be associated with a company must be the criterion of a successful company and not just its revenue/profits/valuation.

The managements of such companies have a huge responsibility as they are role models to smaller companies and younger entrepreneurs who follow them.  Such companies have to play their role, so that a better value system evolves and gets ingrained in the corporate world, and the society.