India today is vehemently demanding the extradition of not a gangster but an ex-industrialist and liquor baron - Vijay Mallya.

India today is vehemently demanding the extradition of not a gangster but an ex-industrialist and liquor baron - Vijay Mallya. He is absconding from the country as he owes more than Rs 9,000 crore to a consortium of 17 banks. The banks are struggling to make up for their losses. On the other hand, the recently elected Uttar Pradesh Chief Minister Yogi Adityanath has announced to waive off agricultural loans worth Rs 36,000 crore in the state.

While agricultural loan waiver goes a long way in helping poor and marginal farmers facing crop failure due to insufficient monsoon or a natural calamity, it still comes with a cost. Whenever there is a loan write-off, be it for loans taken by a wilful defaulter like Mallya or for the selectively needy farmers, the nation's taxpayers bear the cost. Such defaults and waive-offs add to the woes of the banks, which are already struggling with their bad debts or non-performing assets (NPAs).

The data on advances and NPAs of domestic banks, as provided by the Reserve bank of India (RBI), shows that the Gross NPAs have registered more than a threefold increase, from Rs 1,759 billion in 2013 to Rs 5,504 billion in 2016. Total advances (or bank loans) have registered 8 per cent compound annual growth rate (CAGR) over the same period. 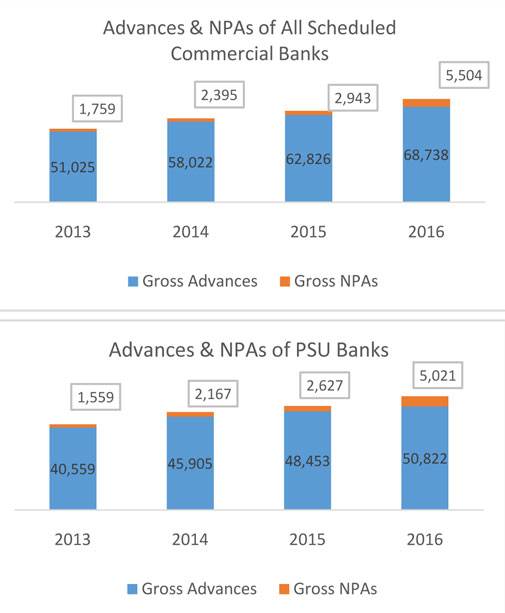 There are two conclusions to be drawn here. First, the banks' loan growth rate has been tepid for the period when NPAs have witnessed a sharp increase. Second, the NPAs seem to be more concentrated in the books of PSU banks. The latter is not surprising, given that PSU banks account for more than 70 per cent market share of the Indian banking sector.

NPAs across banks are as much a problem of the future as they are a mistake of the past. Whenever a bank writes off a loan as a loss, its capital shrinks. Under regulatory guidelines, banks must achieve a capital-to-risk-asset ratio (CRAR) of 8 per cent. With the NPAs impacting a bank's capital negatively, its ability to issue fresh credit reduces significantly. With more than 90 per cent of commercial credit in India being facilitated by banks, NPAs thus create a deep decelerating impact on industrial growth.

The RBI data on industry-specific deployment of gross bank credit shows that bank credit growth is charting a year-on-year (YoY) decelerating trend. In March 2017, YoY credit growth rate of banks was 7.4 per cent as against 9 per cent in March 2016. If you are thinking there has at least been an uptick in banks' credit, please note that the growth is positive only in agricultural, services and retail loans segments. Industrial credit in March 2017 degrew by 1.9 per cent YoY.

The slowdown in credit can be partially attributed to the recent demonetisation drive of the government to cleanse the economy of black money. But the larger blame for credit degrowth must be shouldered by the mounting NPAs in the books of the banks.

The overexuberated credit issued to the infrastructure sector between 2003 and 2008 and later on is obviously a credit call gone wrong. Post-liberalisation, in the 1990s, commercial banks gave stiff competition to then existing development finance institutions (DFIs) such as the IFCI, IDBI and ICICI, which slowly became unprofitable and winded up. With the DFIs gone, it now came upon the commercial banks to use their short-term time and demand liabilities to fund long-gestation infra projects. Further mired by policy delays and environmental issues, these projects took longer than expected to be on track. Widespread government corruption also had a hand in the failure of large-scale infrastructure projects.

As a measure to ward off recession post the global economic meltdown in 2008, the Indian government encouraged the banks to lend even more to the infrastructure sector. As per RBI data on industry-specific deployment of bank credit, exposure to infrastructure in April 2007 stood at Rs 1,445.31 crore, which increased to Rs 3,906 crore in April 2010 and rose to Rs 7,579.62 crore in April 2013. With stalled large-scale infrastructure projects and high commodity price-driven inflation hurting the industry, loan quality on banks' books suffered. This has led to systemic build-up of stressed assets in banks' books over time.

The RBI has been making dedicated efforts to tackle the NPA issue plaguing the Indian banks. The first step was towards recognition of stressed assets, followed by creating provisions in the books. The government is also doing its bit by way of infusing cash in the capital-starved banks. The 2015 Indradhanush programme pegged the recapitalisation requirement at Rs 1.8 lakh crore and the government had announced that it would infuse Rs 70,000 crore over a span of four years from budgetary allocations.

While cleaning the banks' books is vital, it is time that regulators have a broader vision and refocus on boosting the economic growth in the country. Economic growth is possible only when the ongoing secular decline in bank credit reverses. The government and the RBI should now consider measures beyond the traditional to bring in monetary expansion.

Prof. Gourav Vallabh is Professor of Finance at XLRI, Jamshedpur