Rajan chooses inflation over growth; was it the right choice?

The central bank has been focussed on taming inflation which has been largely driven due to structural issues. So, in the battle between growth and inflation, was picking inflation the right choice?

Shweta Punj
The new Reserve Bank of India (RBI) Governor Raghuram Rajan's monetary policy was expected to be less hawkish than that of his predecessor D. Subbarao*, who raised the benchmark repo rate from 6.75 per cent in March 2011 to 8.50 per cent in March 2012 though inflation had moderated in 2011/12 to 8.9 per cent.

He was expected to maintain his hawkish stance, considering inflation has been stubbornly high.

Rajan has also lowered the growth forecast to 5 per cent for the current fiscal and continues to be pessimistic on inflation. "On inflation, both wholesale and consumer price inflation are likely to remain elevated in the months ahead, warranting an appropriate policy response," the central bank's governor said. The RBI has been focussed on taming inflation which has been largely driven due to structural issues. So, in the battle between growth and inflation, was picking inflation the right choice?

"He is trying to tackle inflation from an expectations point of view. If you don't keep the demand weak, it will move to other parts of the economy, the moment there is some pick-up in demand, industry will pass it on to the consumer," says D.K. Joshi, Chief Economist, Crisil. "He can't abandon inflation control." 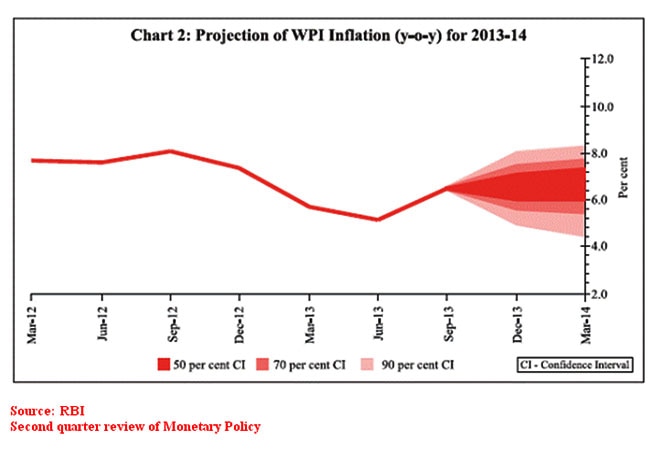 But one of the largest industry bodies, FICCI, expressed its disappointment. It questioned the efficacy of rate hikes in curbing inflation considering inflation in India is largely a result of supply side phenomenon.

"While raising interest rates would have little impact on such inflation, it will certainly penalise Indian industry that is already in the midst of a slowdown," said A. Didar Singh, Secretary General, FICCI.

Stock broking firm Karvy expects the investment cycle to take a further hit. "The major issue now is faltering growth and addressing the supply side issues which are driving inflation," it said in a research note.

The current account deficit (CAD) seems to have been brought under control, but inflation and the high fiscal deficit will continue to haunt at least for the next quarter. As Rajan almost said: the worst is not over yet.

(*an earlier version of the story had incorrectly mentioned D. Subbarao's name as D.V. Subbarao. It has now been corrected.)