To differentiate itself from the Brezza, Toyota has made cosmetic changes with the bumper and grille of the vehicle in the front and colour combination inside while also doing away with a like to like entry level variant for the Brezza LXi which has a starting price of Rs 7.34 lakh 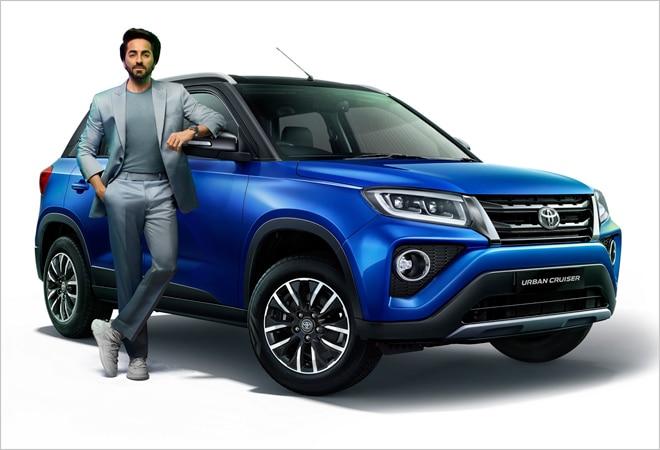 Japanese auto giant Toyota Kirloskar Motor (TKM) on Wednesday forayed into the compact SUV segment with the Urban Cruiser-a re-badged version of Maruti's bestseller Vitara Brezza, at a starting price of Rs 8.4 lakh, which goes up to Rs 11.3 lakh for the top end variant. Urban Cruiser is the second model that Toyota and Suzuki have shared in India after the Glanza premium hatch back, which was launched in June last year and is based on Maruti's Baleno.

The launch comes barely a week after Kia Motors debuted its own compact SUV Sonet making the segment one of the most promising yet competitive in the market. To differentiate itself from the Brezza, Toyota has made cosmetic changes with the bumper and grille of the vehicle in the front and colour combination inside, while also doing away with a like to like entry level variant for the Brezza LXi, which has a starting price of Rs 7.34 lakh. The mid range variant as a starting point, however, makes the Urban Cruiser one of the most expensive offerings in the segment, outstripping even the Ford EcoSport that has a starting price of Rs 8.17 lakh.

With no diesel engine under the bonnet, the new car gets the same 1.5 litre petrol engine of the Brezza, which has a peak power output of 103 PS, torque of 138 NM and an ARAI certified fuel economy of 18.76 kpl. The bigger engine, however, means the car attracts a higher GST of 43 percent unlike 29 percent that petrol variants of rivals like the Venue, Sonet or Nexon attract because of the smaller 1.2 litre engine, which partly explains the high price tag of the car. It is mated with a 5 speed manual transmission available in three variants priced between Rs 8.4-9.8 lakh while a 4 speed torque converter automatic transmission is also available in three variants at Rs 9.8-11.3 lakh.

"Our entry into the compact SUV space comes at a time when the segment has gained much popularity due to its body type and superior road presence thereby garnering greater connect and appeal among today's youth. At TKM, the focus is always on delivering the best products and services to our customers who have remained loyal to the brand over the years while looking for ways to welcome more customers, particularly the youth, to the Toyota family," said Masakazu Yoshimura, Managing Director, TKM.

"The launch of the all-new Toyota Urban Cruiser is an important step in that direction. It is our ambition to enable more people to buy and experience a Toyota vehicle and our renowned after-sales service, which is a differentiator for us in this segment. We will continue to emphasize on introducing ever-better cars, better technologies and environment-friendly products and services. Our alliance with Suzuki allows us to surge ahead on that path while building a self-sustaining local ecosystem of suppliers and partners," Yoshimura added.

The track record of manufacturers coming together to offer re-badged cars, that allows them to save on cost of developing a completely new car, has been mixed in India. The Volkswagen group and Renault Nissan alliance have tried this extensively in the country with limited success but given the greater reach of Maruti and Toyota in India, their experiment is being keenly watched.

With the Glanza, Toyota has been able to sell a shade under 30,000 units in 15 months at an average of 2,000 units a month. The Baleno sells around 15,000 units every month on an average. The relatively lower numbers aside, Toyota believes Glanza has helped bring new customers to its fold and the Urban Cruiser will only take this forward.

"The first three months after we launched the Glanza were an eye opener for us as around 50-60 percent of the customers were first time Toyota buyers. That is very encouraging," says Naveen Soni, senior Vice President, sales and service, TKM. "With the Urban Cruiser again we are entering into a segment we were not present in before but it is a segment that is growing very fast so we are confident of a good showing."

The craze for compact SUVs - loosely defined as vehicles that like small cars measure no longer than 4 metres but have a higher stance and better road presence - has shown no signs of abating in India. At a time when the domestic automobile industry is in the midst of its worst slowdown in almost half a decade - sales declined by over 17 percent in 2019-20- this segment is an outlier.

In fiscal 2020, sale of compact SUVs grew by 8.7 percent to nearly 345,000 units. The entry of Hyundai Venue in the segment last year however saw sales of segment leader Brezza decline by a steep 30 percent at 110,641 units.