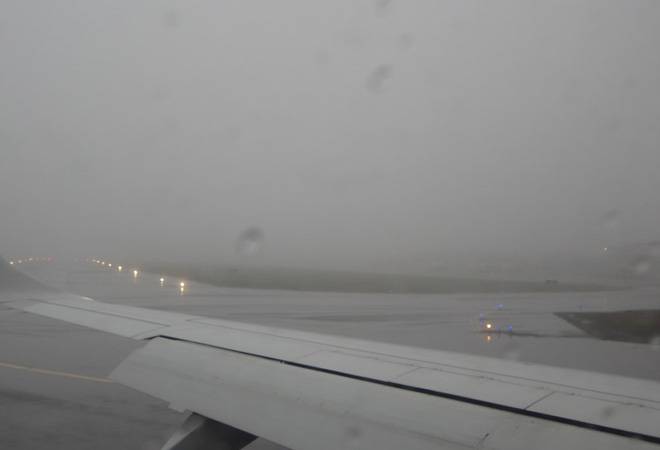 Flyers faced tough time at Delhi's Indira Gandhi International Airport as nearly 200 flights were delayed on Thursday, due to the dense fog in the national capital.

The flight operations at Delhi airport was also affected today due to the low visibility which affected departures of flight.

With dense fog blanketing the national capital, most of the airlines issued guidelines and advisories including IndiGo, Jet Airways, Vistara and SpiceJet, asking their passengers to check their flight status before heading for the airport.

Due to the impact of bad weather in Delhi, all departures, arrivals and their consequential flights might be affected, SpiceJet was quoted as saying.

"Departures have now resumed from DEL, after being held up for last 2 hours and 30 mins due to fog. Arrivals were however continuing during the time, although with delays," Vistara informed on Twitter.

Due to adverse weather conditions (fog) at Delhi airport, our flights to and from Delhi have been affected, Jet Airways said.

"Due to expected poor visibility at #Delhi and #Bengaluru airport, flight departures and arrivals may be impacted. Do check your flight status before you leave for the airport," tweeted Indigo.

Delhi Indira Gandhi International Airport, the largest airport in India, also tweeted that it has implemented low visibility procedures at the airport and requested passengers to contact the airline concerned for updated flight information.

However, the outlook for next subsequent 12 hours is not good. The weather department warned that visibility may reduce to 300 meters in the night due to dense fog.

On Thursday, the minimum temperature was recorded at 6.7 degrees Celsius, with the visibility dropping to 400 meters and the air quality recorded under 'severe' category, according to statement released by the weather office.

BJP leader Ram Madhav was among the affected passengers as all flights outbound from the Delhi airport were delayed due to bad weather on Thursday morning.

"CAT 3 etc., notwithstanding, stuck in d aircraft for last 3 Hrs at Delhi airport with absolutely no info. ATC too unable to tell when the flight wl get clearance. Fog in Delhi can cripple air movement at 12 noon. No technology can conquer nature (sic)," tweeted Madhav from the aircraft.