Vistara to continue with pay cut for employees till March, to hike flying allowance for pilots 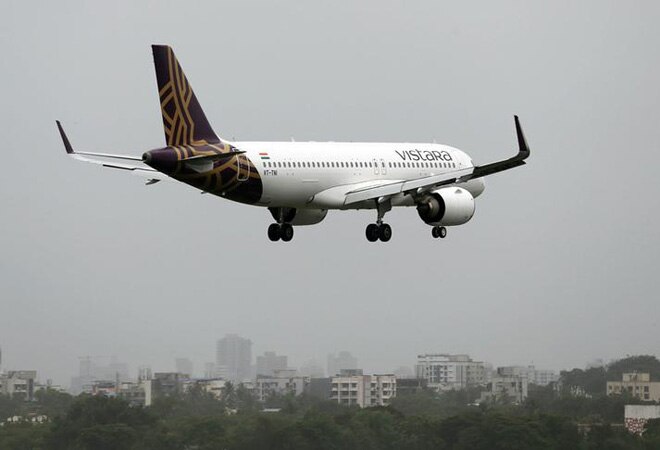 Vistara, a joint venture between Tata Group and Singapore Airlines, on June 30 announced a reduction in salary of its nearly 40 per cent of the total workforce till December 31

Full-service carrier Vistara will continue with pay cuts of its staff till March but will do away with the three-day leave without pay for pilots effective from January 1.

For pilots, the carrier will implement a 10 per cent salary cut while at the same time increase their monthly base flying allowance to 40 hours from 20 hours at present, a Vistara spokesperson said in a statement to PTI on Thursday.

Vistara, a joint venture between Tata Group and Singapore Airlines, on June 30 announced a reduction in salary of its nearly 40 per cent of the total workforce till December 31, to deal with low cash flow amid weak passenger demand in the wake of the pandemic.

Also Read: Vistara eyes non-stop flights to US due to rise in demand

For pilots, who were getting base flying allowance since April, which is a fixed component of the salary, for 70 hours per month, the allowance was reduced to 20 hours till December 31.

In September, the airline also introduced a three-day 'Leave Without Pay' for pilots.

"The pay cut scheme at Vistara will continue to be in effect until March 31, 2021, as part of which the Vistara CEO will continue to take the maximum cut of 25 per cent in monthly pay," the spokesperson said.

The spokesperson added that the airline's senior staff, including members of management, will be affected by a cut of 15 per cent in monthly pay; while for those at mid-to-junior-mid levels, the cut will be 10 per cent.

"COVID-19 continues to have an industry-wide impact on business, despite improvement in the operating environment. While we currently deploy nearly 70 per cent of our pre-COVID-19 capacity, our operating revenue is still at a significant distance from normal levels," the Vistara spokesperson said in the statement.

To this end, the airline continues to take several measures to control operational expenditures, including containment of staff costs, the spokesperson added.

Employees at the junior levels, whose monthly cost-to-company equals or is more than Rs 50,000, will be affected by a 5 per cent monthly pay cut, Vistara said.

"For pilots, a monthly 10 per cent pay cut will be applicable. However, their monthly base flying allowance will be increased from the current 20 hours to 40 hours. The scheme does not impact nearly 60 per cent of Vistara's staff at junior levels," the spokesperson added.

The aviation sector continues to grapple with low passenger volumes and travel restrictions by various countries. Even as the scheduled international commercial operations remain suspended since March 23, the domestic demand though has been on an uptick sequentially since the resumption of services from May, it has not yet matched the pre-COVID-19 level.

Domestic passenger volumes in November were almost half of the November 2019 level at 52.71 lakh passengers, according to data from the Directorate General of Civil Aviation. However, month-on-month domestic demand grew 22 per cent over October 2020, as per the data.

"Our approach of going after measured growth in business puts the company in the position of being able to continue saving all jobs and implement rational reduction of staff costs, even though taking that decision has always been the toughest for the company's board and the leadership," Vistara said.

The airline said it plans to ramp up its domestic operations in line with government guidelines and remain operationally ready to operate more international flights whenever scheduled operations are allowed to resume.

Earlier this month, the civil aviation ministry allowed the airlines to increase capacity to 80 per cent from 70 per cent earlier.

"Our long-term plans of fleet and network expansion within and outside of India remain unaltered," said the spokesperson.