The aspiration to build a pipeline passage to the country will be 'there' in the joint Indo-Russian statement, an Indian official said, but details remain sketchy. 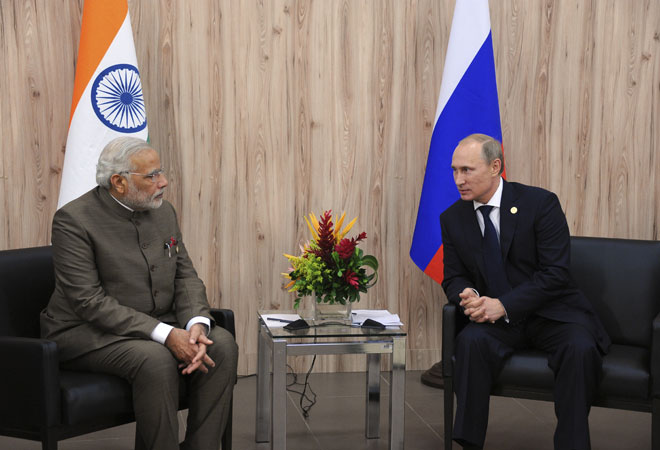 India and Russia will strike an energy partnership when Prime Minister Narendra Modi hosts President Vladimir Putin on Thursday to prepare the way for two Siberian oil deals and chart a route for a first pipeline between the two countries.

However, a joint 'vision' document is likely to lack hard details, with terms still being thrashed out for ONGC (Oil and Natural Gas Corp) Videsh to acquire an interest in Rosneft's Vankor and Yurubcheno-Tokhomskoye oilfields, domestic and Russian officials and industry sources say.

There are doubts over the viability of proposed oil and gas pipeline routes that would either cross conflict-ridden Afghanistan and Pakistan or mountainous tracts of inner China.

Russia, isolated by the West over its annexation of Crimea and backing of an armed uprising in eastern Ukraine, has a friendship with the country that dates back to the Soviet era.

"In the present circumstances, when Europe is trying to isolate Russia, Putin wants to show that he has friends in the world," said Gulshan Sachdeva, head of the Centre for European Studies at Jawaharlal Nehru University (JNU) in the national capital.

"Modi and Putin are similar leaders. They like to announce big schemes," Sachdeva added. "It might make sense to do so - whether or not they come to fruition is another matter."

The government explicitly rules out joining Western sanctions against Russia although the Prime Minister has struck up an increasingly warm friendship with his United States counterpart Barack Obama since winning power in May, and will host the US President in January.

Putin has been a regular visitor to India since becoming president in 2000 but the trip will be a one-day affair. A proposal for him to address the Parliament was quietly dropped.

Russo-Indian trade, which stands at US $10 billion, is only a ninth of the volume between Russia and China.

Officials on both sides say the strategic declaration will encompass issues from defence to nuclear power and even diamonds, with state monopoly Alrosa keen to ramp up exports to the country.

"The visit will solidify the political relationship; confirm Russia as India's principal purveyor of arms; and expand ties in other areas, such as nuclear energy," said Dmitri Trenin, director of the Carnegie Moscow Center.

Russia's state-controlled Rosneft, the world's largest listed oil firm by output, is strapped for cash due to Western sanctions, and is showing increased willingness to offer upstream projects to the country.

But wrangling continues over the interest ONGC's overseas arm ONGC Videsh would get in Vankor, which is expected to reach peak output of 500,000 barrels per day in 2019.

Government sources say that Rosneft has offered a 10 per cent stake in the Vankor operating company, but that the centre is pushing for a 25 per cent interest that would allow ONGC Videsh to book equity barrels.

The government is also seeking tax breaks on a proposed 49 per cent stake in Yurubcheno-Tokhomskoye, a greenfield project in eastern Siberia, because under Russia's existing fiscal regime the field would lose money.

The aspiration to build a pipeline passage to the country will be 'there' in the joint Indo-Russian statement, a second Indian official said, but details remain sketchy.

Russia's ambassador to India, Alexander Kadakin, told reporters that an export route via China's westernmost province of Xinjiang was under consideration but needed to be studied further due to challenging terrain.

Indian officials have pushed the idea of a US $40 billion pipeline to pump Siberian gas to the country, but even if it is practicable it would struggle to compete with tanker-shipped liquefied natural gas (LNG).

The country imports 80 per cent of the 4 million bpd of crude that it consumes daily, making an oil link a more promising option, yet proposals have so far failed to get off the drawing board.

Russia's Eastern Siberia-Pacific Ocean oil pipeline has a capacity of 1.6 million bpd, while state natural gas monopoly Gazprom is working to finalise a US $400 billion deal to pump gas to China.

No plan to relax rules on distance between 2 airports: Govt