The devices will be available online on Flipkart and Amazon from October 17 midnight. Moto Z was unveiled earlier this year at IFA. Later in June, Motorola also unveiled the Moto Z Force and Moto Z Play, variants of Moto Z. The phones were launched in India earlier this month. The devices have finally hit the shelves and are selling on e-commerce giants, Amazon and Flipkart.

With the Moto Z, Motorola is betting big on modular technology. The Indian launch will be critical to the company as it is one of the biggest and fastest growing smartphone market in the world.

LG G5 and Nextbit Robin were other phones that tried to introduce modular technology in India but failed to make a mark in the smartphone market.

Though the phone in itself is pretty-looking and ranks high on the spec-sheet, the Moto Mods will undeniably be the selling point of the device. The Moto Mods will be available as a separate buy. The Insta-share Projector is available at Rs 15,999. Hasselblad True Zoom camera mod is priced at Rs 19,999 on Flipkart and Rs 18,999 on Amazon. One of the affordable mods, the JBL  SoundBoost speaker will be available at a price of Rs 6,999. The Incipio offGRID Power Pack costs Rs 4,999.

The Moto Z will come with a 5.5-inch QHD Amoled display, and will be powered by a Qualcomm Snapdragon 820 SoC. The processor will be paired with 4GB of RAM. 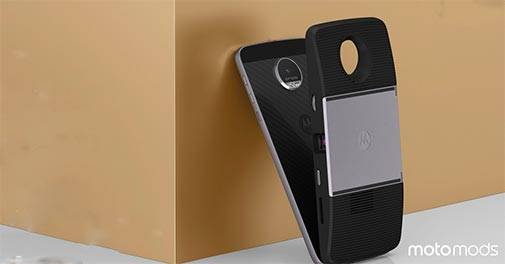 It will be available in a choice of 32GB or 64GB of internal storage, which is expandable via microSD card (up to 2TB).

In terms of cameras, the device comes equipped with a13 Megapixel rear camera with optical image stabilisation (OIS) and laser autofocus. the primary camera will be coupled with a 5 Megapixel front-facing camera with a wide-angle lens and a flash. The device is not water proof but comes with a water repellent coating.

The Moto Z Play will be a cheaper variant but will come with much larger battery (3510mAH) and a slightly thicker 7mm frame. The device will be powered by Snapdragon 625 and will be assisted by 3 GB RAM and 32GB ROM.Motorola claims the device can provide a back up of 45 hours.

It will feature a 16Megapixel camera with f/2.0 aperture, coupled with a 5 Megapixel front facing snapper with a f/2.2 aperture.