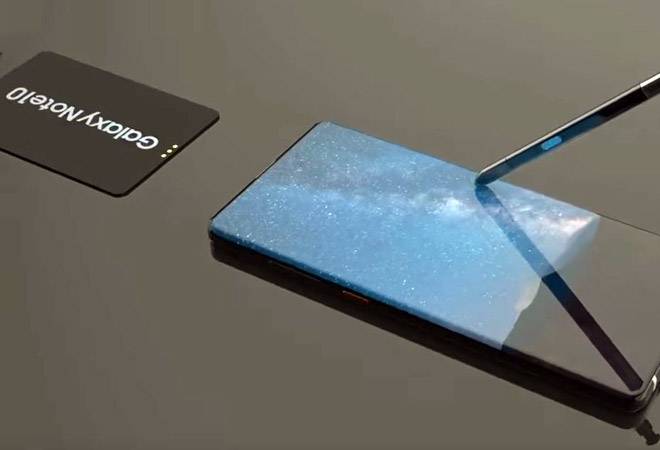 Smartphone major Samsung is all set to hold its Unpacked Event at 1:30am IST on August 8 (August 7, 4pm ET) at Brooklyn, New York. The South Korean electronics major has already sent invites that shows a stylus just above the single camera lens. The Galaxy Note series from Samsung will have two phones this time - Galaxy Note 10 and Galaxy Note 10+. There are a lot of rumours regarding the upcoming Note 10 Series. One of the biggest one that is doing rounds is regarding the cameras. The Samsung Note 10 smartphones will likely have a punch hole cut-out on the top centre of the display, which is also suggested in Samsung's latest invite.

Let's delve into all the rumours we have ahead of the unveiling later next month.

Samsung will launch two Galaxy Note 10 smartphones just like the Galaxy S10 series. The regular Galaxy Note 10 will have a display size of 6.28 inch and a Galaxy Note 10+ will sport a bigger 6.75 inch display. Both the screens are expected to show-off the QHD+ Dynamic AMOLED display panels.

Design-wise, the Galaxy Note series is up for a big overhaul. The Galaxy Note 10 will come with a punch-hole camera design. But, unlike the S10 series, the Galaxy Note 10 devices will have the cut-out on the top centre of the screen. The regular Note 10 will get a single selfie camera, while the Plus-sized model may come with dual selfie cameras. According to the leaks, the Note 10 phones may use a three-stage variable aperture that will switch between f1.5, f/1.8 and f/2.4 apertures. Samsung currently offers dual variable aperture feature on Galaxy S series phones.

Another big design change will be seen on the back of the Galaxy Note series. Unlike the Galaxy S-series smartphones, the Galaxy Note 10 will offer a triple or quad-camera system on the top left side of the rear panel. The Galaxy S flagships came with a horizontal camera set up around the centre.

Samsung may finally get rid of the headphone jack with Galaxy Note 10 series. As per the rumours, killing the 3.5mm jack will allow Samsung to fit in a bigger battery.

The Galaxy Note 10+ is expected to be a 5G smartphone. There are rumours that Samsung could also launch a separate 5G Galaxy Note device.

One of the biggest changes to come with Samsung Galaxy Note 10 will be the Sound on Display technology. The new technology does not require the earpiece and uses the vibration under the screen to deliver the sound to the ear.

The Galaxy Note 10 stylus will have a small camera module, allowing users to take a photo without needing the device. However, experts have raised a privacy concern so we'll have to see if the feature finally makes its way to the launch event.

As for the hardware specifications, the Galaxy Note 10 series smartphones are expected to run on the Exynos 9820 SoC paired with up to 12GB of RAM.