Nokia 5.4 looks like Nokia 3.4 in FCC listing, to launch soon

Nokia 5.4 is rumoured to come with four cameras, a USB-C port, and Android 10. Nokia 5.4 seems around the corner as the successor of the not-too-old Nokia 5.3. Some interesting details about the Nokia 5.4 have cropped up recently, including some design elements and, more importantly, the price, but what the Nokia 5.4 will look like is something that has remained a mystery. That is no longer a case. Nokia 5.4 seemed to have passed the US FCC certification website where its sketch available in the user manual hints at the design. And it looks quite identical to the Nokia 3.4.

The Nokia 5.4 FCC listing, spotted by 91Mobiles, shows an HMD Global device with the model number TA-1340. Reiterating the previously shared information, the FCC listing has suggested the Nokia 5.4 will indeed have a punch-hole display. The cutout will be located on the left side of the display, which is a new approach in the series since the Nokia 5.3 has a waterdrop-style notch. There will be a circular camera module on the Nokia 5.3, housing four sensors. The specifications of these sensors are not available either via the FCC listing or some other leak from the rumour mill.

The sketch of the Nokia 5.4 in the user manual also shows there will be a USB-C port on the bottom flanked by the speaker grille on its right and the microphone on the left, the power button and volume rocker on the right side, and the Google Assistant button on the left side. The SIM tray will be located on the left side, as well, right above the Google Assistant button. This will be a triple-slot SIM card tray, meaning you can insert two nano-sized SIM cards and a microSD card together. Apart from the visible parts, there is nothing else that is clear right now. A fingerprint sensor is also available on the back. 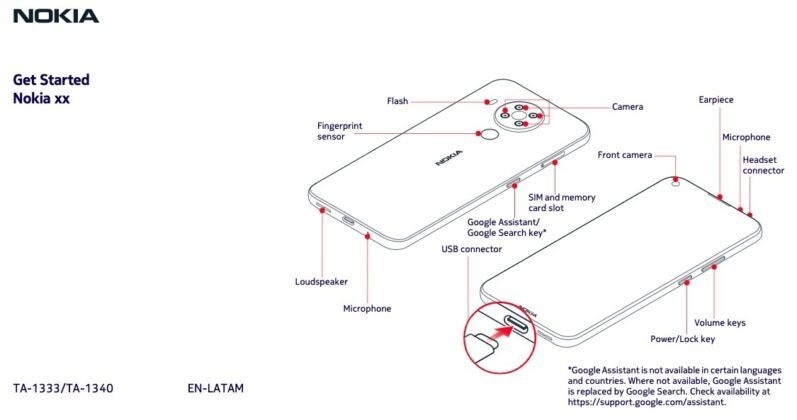 Although, there is another HMD Global device listed on the FCC website. It bears a model number TA-1333 and seems like a variant of the Nokia 5.4. This model could have less RAM and storage capacity than the previous one would have. Rest of the specifications of this model will likely be identical to what the Nokia 5.4 would come with.

Rumours are rife that the Nokia 5.4 will come with a 4000mAh battery, a 6.4-inch display, and 4GB RAM alongside 64GB and 128GB storage configurations. It will come running Android 10 out of the box, with a promised upgrade to Android 11 and later Android versions. These seem, more or less, the same specifications as the Nokia 5.3 saving a few. For example, the display is going to be smaller than Nokia 5.3's 6.55-inch LCD. Moreover, it is also unlikely the Nokia 5.3 will come with a high refresh rate on the display. The processor information is not available right now. Nokia 5.3 is powered by a Qualcomm Snapdragon 665 processor.

The leaked specifications hint at a mid-range device in the form of Nokia 5.4. But instead of waiting for the price to be tipped later, two Australian retailers have gone ahead and listed the phone on their websites revealing the prices. According to the listings on Australian retailers, Acquire and Aus Shop IT, spotted by Nokia watchdog Nokiamob.net, the Nokia 5.4 will come in a 4GB RAM and a 128GB storage configuration. While Acquire has listed the Nokia 5.4 with a price of AUD 371 (roughly Rs 20,100), the Aus Shop IT has priced the Nokia 5.4 at AUD 349 (roughly Rs 18,900), which is much less.

If we were to take a guess, the Nokia 5.4 should cost less than what the Australian prices are projecting. This is because the Nokia 5.3 was launched in India for Rs 13,999, which is way less than either converted price. Nokia normally sells its Nokia 6.X and Nokia 7.X smartphones in the Rs 18,000 to Rs 20,000 range in India.