The LG Optimus 2X is a well engineered device with a good camera, and the company throws in a mini-HDMI to HDMI lead cable with the device. The Micromax Bling 2 A55 is a phone for the ladies, and it never lets you forget that.

First, but not the last word 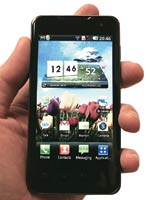 LG Optimus 2X
Being first is not always a good thing. While bringing the 'first' dualcore Android smartphone to the market, LG may have left behind some fairly basic software work. One can have few cribs about the hardware. The Optimus 2X is a well engineered device with a good camera, and the company throws in a mini-HDMI to HDMI lead cable with the device. The 1 Gigahertz NVIDIA Tegra processor seems quite beefy, but is let down badly by inadequate memory.

On the face of it, 512 megabytes of memory seems quite a bit. But the operating system and the music player application take up so much memory that when you run a few other applications on the device - in our case the Seesmic social media application, and Angry Birds - performance slows down. The device even hangs occasionally. LG was the first with a dual-core mobile device, but in the weeks since, Samsung has caught up with the Galaxy S2, and HTC with the Sensation. However, the LG Optimus 2X has a market price much lower than that of competing devices, and as such remains a good buy. 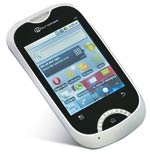 Micromax Bling 2 A55
Dim Twinkle
The Micromax Bling 2 A55 is a phone for the ladies, and it never lets you forget that. This entry-level touch smartphone features a heavy ring of Swarovski crystals embedded in both the front and back plates. The soft leather carrying case includes a vanity mirror and a pouch for lip gloss. The aggressively feminine design may elicit squeals of glee from teenage girls and smirks of disgust from their older brothers. This is not a phone for the faint of heart. The large touch screen makes for easy scrolling, although the resolution is rather low. The speakers and call quality are acceptable, but the phone freezes more often than other models running Android 2.2. Texting on this phone - as on any touch smartphone with a 3.2 inch screen - is agonising, and those who want a phone with email or text abilities should look elsewhere. Micromax thinks it knows what women want - and maybe the market will prove it right. If only it had invested in a few software frills to go with the fancy packaging. After all, there is more to life than appearances.

Micromax Bling 2 A55
+ve: Well-priced with all the frills of high-end smartphones, it also 'twinkles'
-ve: Software tends to hang, screen is quite small
Price: Rs 8,450